BUDAPEST (AFP) – Hungarian families stricken by unemployment due to the COVID-19 crisis who have also fallen through the country’s flimsy social security net say they have little option but to turn to a pop-up soup kitchen.

The help is a private initiative by Norbert Bango and his wife Vivien, who run a Budapest restaurant and decided to repurpose its kitchen as a relief centre after it was shuttered last March during the first coronavirus lockdown.

Since then, at least once a week the couple have been preparing and distributing hot meals as well as bags of essentials like cooking oil, flour and fruit.

“We’re the only restaurant in central Budapest doing this,” Vivien, 35, told AFP while ladling stew from a steaming vat into hundreds of plastic bowls of noodles.

“We gave up our Christmas break with our family as we couldn’t sleep knowing people would go hungry,” she said. 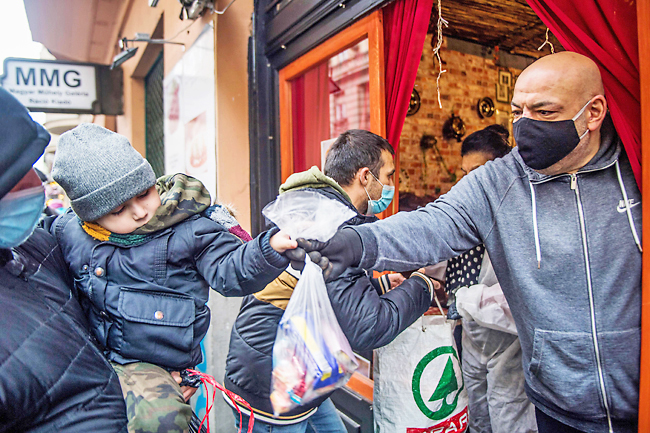 But since the coronavirus measures emptied the city of tourists and customers, it now plays host to a queue of people desperate for food, regularly stretching for hundreds of metres.

“When we started, so many families with children came that I said whatever happens I have to keep going to try to help them,” Norbert, 48, told AFP.

Many in the queue said they had lost their jobs due to the pandemic.

“I’m one of 50 let go this year from my former workplace,” 37-year-old office cleaner and single mother of three Cecilia Jakab told AFP.

“We can’t pay our bills anymore but since Norbi and Vivi started this at least my children can be fed,” she said.

The virus caused a recession, which is estimated to have shrunk the economy by over six per cent last year, and the loss of several hundred thousand jobs during the first lockdown in springtime.

However, many unemployed people are not officially registered as such and government data in November showed only a slight rise in unemployment in comparison to the previous year, to around 4.5 per cent.

In addition, the European Union (EU) member has one of the least generous social security nets in the bloc, with meagre unemployment monthly payments capped at 130 per cent of the minimum wage, which stands at around EUR500.

Payments are also limited to three months, one of the shortest periods in the EU.

According to the National Employment Service (NES) agency, half of all registered job-seekers nationwide – around 140,000 in December – were not entitled to receive state support.

“We don’t get any kind of social aid now, so many people end up here,” said restaurant cook Andras Mezo, 47, jobless since March, who has been regularly joining the meals queue.

“I was officially registered by my employer for only a few hours’ work so I got less than the minimum wage in unemployment benefits and just for a few months,” said laid-off dishwasher Gabriella, 65, who did not want her full name published.

“He thinks that nobody should get ‘unearned’ income, even if people have paid in social security payments while they worked,” he said.

“He also fears that if people start getting support during the crisis that people will continue to demand it afterwards,” he added.

A report on Wednesday by the GKI economic think tank said Hungary’s coronavirus economic rescue package could have saved many more jobs with a more extensive “furlough” programme like the one in neighbouring Austria.

Aside from limited wage subsidies in certain sectors like tourism, the government response has focussed on loan, tax and social insurance payment freezes and supporting prestige investments like a new athletics stadium which GKI said “have nothing to do with protecting the real economy”.

According to Norbert Bango, neither the state nor the local district municipality has helped him provide the tens of thousands of meals and food bags he has handed out since March.

District municipalities, meanwhile, many run by the opposition since local elections in 2019, have complained that Orban has stripped them of tax revenues that help them support social services like emergency food provision.

Neither the government press office nor the municipality where the Kis Kulacs is located replied to questions sent by AFP.

“The authorities don’t want to acknowledge this misery on the ground I think,” said volunteer Zoltan Swanda, 44, at the Kis Kulacs, who stewards the queue.