Hun Sen thanks Biden for return of looted statues

More than 30 artefacts are lined up for repatriation to the kingdom by the end of the year. Hun Sen met with Biden on November 12, as Biden attended the ASEAN-US Summit and the East Asia Summit on November 13.

“Prime Minister Hun Sen thanked the US for returning looted artefacts to Cambodia. He said the US is the ‘number one’ country in helping repatriate looted antiquities,” said a social media post by the prime minister.

Earlier this month, the US returned a pre-Angkorian-style sandstone statue of the four-armed deity Narayana, or one of the forms of Vishnu.

The statue was handed over at the Cambodian embassy in the US, in a ceremony between Cambodian Ambassador Keo Chhea and Thomas Acocella, representing the New York County District Attorney’s office.

Director of the Archaeological Department of the General Department of Heritage at the Ministry of Culture and Fine Arts Huot Samnang told The Post: “Currently we are preparing documents to repatriate this statue to Cambodia. It will be returned later this year or at the beginning of next year, along with about 30 other statues that the US government returned to us a few months ago.”

According to the Cambodian ambassador, the cost of repatriation is the responsibility of the government of Cambodia. 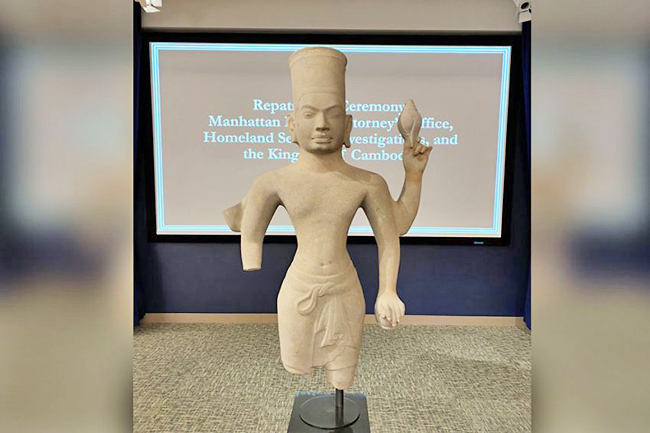