THE WASHINGTON POST – As a reviewer, I’ve always regarded myself as a generalist, lurching from a novel this week to a biography or work of history the next, occasionally interspersing an essay or rediscovering a neglected classic.

But every so often, I feel the need to be much more – what’s the right word? – serious, intense, almost scholarly. I yearn to immerse myself in the works of a single author, to spend time reading as much of his or her writing as possible. During these literary sprees, I even undertake actual research, scribble notes, talk to experts.

Last month, I realised that this column would coincide with Robert E Howard Remembrance Days in Cross Plains, Tex. There, the writer’s fans gather each June 11 – the day the 30-year-old shot himself in 1936 – for talks, barbecue and camaraderie.

This year’s guest of honour is Roy Thomas, who wrote the 1970s Marvel comics which – along with Lancer paperbacks featuring brutal and sensual cover art by Frank Frazetta – created a new audience for Howard’s best-known character, the greatest warrior of the ancient Hyborian age.

We first learn his name in the soul-stirring epigraph of The Phoenix on the Sword: “Hither came Conan, the Cimmerian, black-haired, sullen-eyed, sword in hand, a thief, a reaver, a slayer, with gigantic melancholies and gigantic mirth, to tread the jewelled thrones of the Earth under his sandaled feet.” 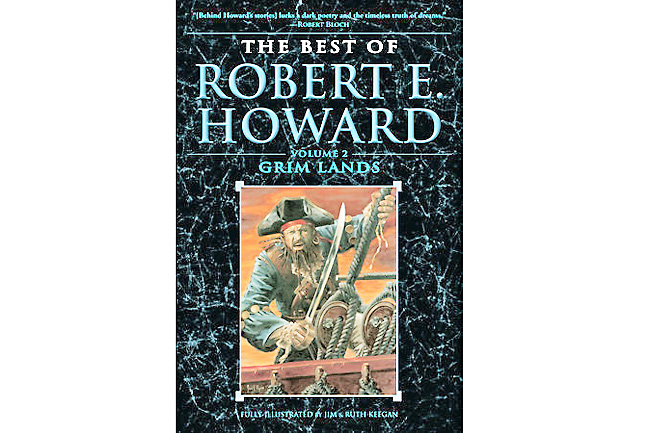 Rather than revisit such unforgettable Conan stories as The Tower of the Elephant or the Kull classic The Shadow Kingdom, I decided to explore their author’s other fiction. To start, I acquired all 11 volumes of The Fully Illustrated Robert E Howard Library,” published by Del Rey Books.

Unlike some reissues, this edition follows either the writer’s typescripts (when available) or the texts originally printed in Weird Tales and other pulp magazines.

Next, three complementary biographies – by Todd B Vick, David C Smith and Mark Finn – greatly contributed to my understanding of a young man who wrote at least 200 stories (and even more poems) while living with his parents.

I then dipped into various old and new collections of Howardian criticism, several from Hippocampus Press and Pulp Hero Press. Not least, I asked for additional guidance from President of the Robert E Howard Foundation Rusty Burke.

Let me say, straight out, that Howard is no mere penny-a-word hack. While similar to Jack London in his range and artistry, he is at heart an imaginative re-interpreter of history, albeit one with a pronounced Spenglerian viewpoint: Peoples or nations ascend to power, eventually grow complacent and corrupt, and one day are supplanted or even eradicated by some vigorous new group on the rise – which will in its turn decline and fall.

Howard consequently celebrates what one might call the positive virtues of barbarism – courage, physical strength, loyalty, ethical behaviour – and contrasts these with the vices, soft luxuries and callous decadence of civilisations in eclipse.

Like Japanese ronin, Howard’s warrior protagonists possess both iron self-control and an innate fatalism. All victories are temporary. In some of his best fiction, though, I was tickled to find him creating comic versions of his usual berserker heroes. The humourous boxing stories about sailor Steve Costigan could almost be the work of Damon Runyon, while the hilarious cowboy misadventures of that “human grizzly,” Breckinridge Elkins, read like backwoods P.G. Wodehouse.

For many Howard connoisseurs, the writer’s finest, most complex stories are his historical mini-epics, set mainly in the age of the Crusades. Of almost novella-length, these chronicle futile last stands, vicious cruelty, inflexible loyalty, casual betrayal.

In” Suleyman the Magnificent besieges Vienna, whose two champions are the carousing ex-knight Gottfried von Kalmbach and the indomitable woman-warrior known as Red Sonya. He opens The Lion of Tiberias– a darkly melodramatic story of love and revenge, centered on the conqueror Zenghi – with a typically laconic but irresistible hook: “The battle in the meadow lands of the Euphrates was over, but not the slaughter.”

Howard’s lean, galloping prose always cuts to the action. Yet trademark themes – such as memories of previous incarnations or encounters with the primordial – regularly elicit moody reflections on the vanity of human wishes or lead to the tender wistfulness of that consummate tear-jerker, For the Love of Barbara Allen. By contrast, in “The Black Stone,” Howard deftly pastiches the antiquarian sententiousness of his pen pal HP Lovecraft.