How to tame a growing monstera

THE WASHINGTON POST – With its large fanlike leaves and winding vines, the Monstera deliciosa is the darling of the houseplant scene. Also known as split-leaf philodendron and the ‘Swiss cheese plant’ (thanks to the characteristic holes in its foliage), the monstera is easy to grow and can survive even in low-light environments.

“That’s the thing about a monstera,” said houseplant buyer for the Great Big Greenhouse and Nursery in Richmond Kathy Madsen. “You can kind of put it anywhere.”

True to its name, the monstera can achieve somewhat monstrous proportions in an optimal environment, expanding as much as one to two feet annually.

“It will take over the pot within a year if you give it the right conditions,” said author of Happy Plant: A Beginner’s Guide to Cultivating Healthy Plant Care Habits Puneet Sabharwal.

Rest assured, though: There are ways to tame an unruly monstera before your home starts to feel like the set of Little Shop of Horrors. Here, plant experts weigh in on how to control growth without doing harm. 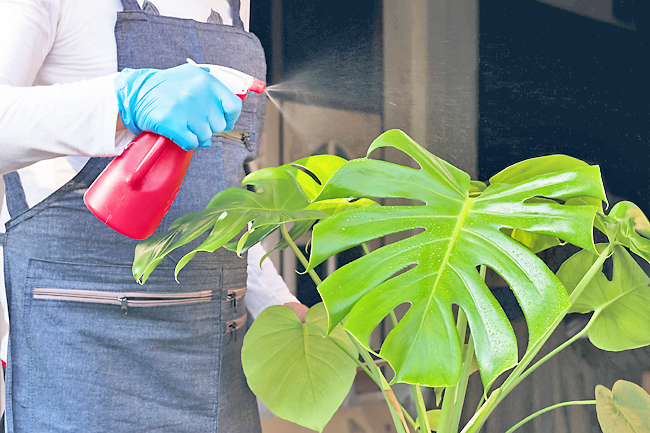 MOVE IT TO A DARKER SPACE

Monsteras grow naturally in the dense, humid jungles of Central America, where they thrive in sun-light filtered through the tree canopy.

Although your home will never be a tropical rainforest, the type of bright, indirect light that monsteras crave is pretty easy to replicate. If yours is growing wild, chances are it is getting several hours of morning sun.

To slow its growth, then, try moving it to a shadier spot. While reducing the amount of light that shines on the monstera won’t kill it, it will alter the way that it branches out and prevent it from getting as big and lush. “It’ll get more leggy, like you’ll get some stem and leaves,” Madsen said.

“Whereas if it’s in a sunroom, where it has more light or filtered light, its going to be bushy, get big leaves and grow faster.”

TRAIN IT TO GROW UP A MOSS POLE

Training the monstera to grow upward is one way to prevent it from expanding outward and spilling into your living space.

Try placing it near a window and training it to climb a moss pole toward the natural light. You can find moss poles at gardening stores or online; or make your own out of one-inch diameter pipe, wire and moss. Carefully push the moss pole into the soil and roots.

Then, using plant ties, secure some of the monstera’s stems to the pole. The moss will give the vines something to cling to and encourage them to creep upward. “You are trying to replicate the monstera growing on a tree,” Sabharwal explained.

Repotting houseplants into larger containers encourages them to grow by giving their roots space to spread out, so if you want to control growth, leave your monstera in the same pot.

Madsen said she has kept hers in the same container for almost a decade, which has prevented it from bushing out-ward.

If you do keep your monstera in the same container instead of sizing up, Sabharwal suggests trimming back the plant’s roots from the base to slow its growth.

“The interesting thing here to remember is that plants generally have the same amount of growth above and below ground,” Sabharwal said. “In the case of monstera, the roots grow as fast as the plant aboveground.”

To trim roots, gently pull the plant out of the pot, brush off the soil and use gardening shears to cut the roots back a few inches (by up to a third of their original size). Then repot the monstera in new soil.

If you find that your monstera has a very large root ball – full of roots that are thick and healthy-looking – you may want to try splitting it into two separate plants.

“If it’s jam-packed with roots, and you pull it out of the pot and there’s no soil left… that’s a good root base to chop up,” said Madsen, who recommended using a plant saw or clippers to cut through it.

Monsteras also have aerial roots, which grow from their stems above ground and look like thin brown vines. These should never be cut back or trimmed because they help to support the plant.

Instead, Madsen advised tucking them into the soil, so they can take root and soak up nutrients.

Another way to control growth is by clipping back foliage.

Trim leaves at the point about two inches below the node (where the leaf meets the stem) to shape your monstera and promote heal-thy growth.

One option is to turn those clippings into more monsteras.

To go this route, Sabharwal recommended making sure the clipping has at least two to four leaves intact, so it’s essentially already a baby plant. Place it in water until it develops new roots, then transfer it to soil.