How to stop your dog from jumping up on people

ANN/THE STAR – A puppy clinging to your trouser leg and awkwardly trying to jump up on you is, well, adorable. But you’d likely be less than thrilled if that once small ball of fur, now a full-grown Labrador and fresh from a dip in a duck pond, pounces on you.

Why do dogs like to greet people this way?

According to dog trainer Susanne Endler, it can be a sign of insecurity, but is often just plain rumbustiousness. In some cases, she said, the obnoxious habit is the dog owner’s fault: “They hold reward treats too high. So jumping up is the inevitable result, especially if the dog is small.”

To prevent this, she advises giving the dog treats at below-knee level. Melanie Lippisch, an online dog trainer, said puppies in particular jump up at their owners because they want to get close to their face.

“It’s actually a friendly gesture, as puppies always seek proximity to their mother’s snout,” she explained. “If you tolerate it, the dog stores it in its memory and will naturally continue to do it in adulthood.” 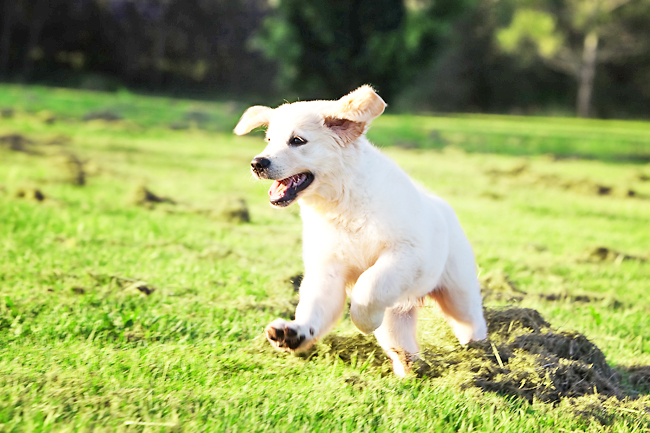 So she advised always putting your hand on the jumping puppy’s chest and pushing it down.

When all four paws are back on the ground, you should praise and pet the pooch.

There’s also a good chance you can break a grown dog of the habit of jumping up on people, Lippisch said, since “dogs do things they think will be rewarding to them (like getting them attention), and usually stop a behaviour at some point if it’s not worthwhile”.

She has three tips on how to get a dog to stop jumping up on people:

“First, you can try holding the dog’s front paws,” she said, noting that dogs don’t like standing on their hind legs. Keep holding the paws for a few seconds after the dog attempts to free them, and then let them go. It’s important to stay calm and not speak to the dog.

A second option is to hold out your hands at waist level, fingers spread like a protective shield, to block the dog. It’s very important to stay calm and not forcibly shove the dog away.

Endler, too, sees this as an effective method, especially for dogs that jump up on people in an unruly way and to test limits.

“Your palms facing downward are a visible boundary that clearly signals to the dog: Go no farther!” she said.

As soon as all four paws are back on the ground, you can praise the dog in a calm tone of voice and give it a treat as a reward.

“Jumping up on people is often caused by excitement,” Lippisch remarks. “If you stir things up again with excited praise, you’re only shooting yourself in the foot.”

Most dogs are quick to learn and will stop the unwanted behaviour after a few days, she said. “There are dogs that are more obstinate though – some types of terriers, for example – that keep at it and test who’s got more staying power.”

As a third option, mainly suitable for smaller dogs, Lippisch suggests tossing two or three treats onto the floor to distract the dog when you enter your home. If the dog jumps up on you after eating them, you can try the first two options.

Having learnt not to jump up on its owner doesn’t mean that the dog won’t do it to other people. So Lippisch recommends enlisting the help of friends and acquaintances for further training.

Ask them to ignore the dog at first if it excitedly jumps up on them when they come round to visit.

Dogs that jump up on passersby during walks can be deterred with targetted towing-line training and a reliable “come” command, she said.