THE WASHINGTON POST – Eggs are one of the kitchen’s greatest wonders – not only because of the myriad ways you can use them to whip up a quick and easy meal, but also because of their two distinct elements, the yolks and whites.

When separated, you can harness their individual strengths for a variety of purposes. The golden yolks, high in fat, provide richness and colour in custards and creams. By cutting out the watery whites, bakers can use yolks in cakes and cookies to boost the fat but not the rise for dense, luxurious textures. Cooks harness the proteins in egg whites by whipping them to form a stable network that traps air and lends stability and structure to such treats as meringue and angel food cake.

To take advantage of those disparate elements, you of course have to split them up. Truthfully, separating eggs takes a little practice and a willingness to accept that you may not be successful 100 per cent of the time.

There are a couple of competing strategies for how to do it. If you’ve struggled, before you buy an egg separating gadget, I encourage you to experiment with a few of these methods. How you do it matters less than the end result. Here’s what to consider.

Why keeping them separate matters. In general, yolk contaminating whites is a bigger deal than a little white mixed in with the yolks. You’ll find differing degrees of how big of a deal this is depending on who you ask. 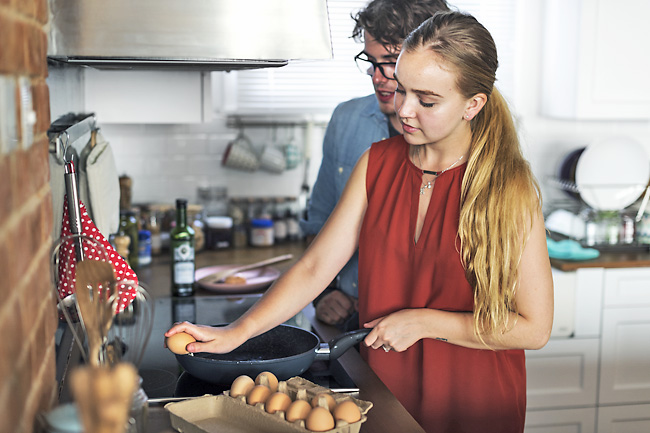 In Rose’s Baking Basics, cookbook author Rose Levy Beranbaum said, “even a drop of yolk will prevent the whites from whipping to stiff peaks”. Hop on over to Harold McGee’s Keys to Good Cooking for this, “Yolk interferes with foaming, though not fatally. Don’t worry about a small residue.” I’m more of the opinion that perfect is the enemy of the good – and who says your next attempt would be any better anyway – so I’m willing to plant myself in McGee’s camp.

The why is important to understand so you can make a judgment for yourself on whether to mulligan or continue onward with a little yolk. As Lauren Chattman explains in The Baking Answer Book, fats can inhibit how egg whites whip up by “coating the proteins and inhibiting their ability to link up with each other to form the flexible web needed to trap air bubbles”.

Egg yolks are 30 per cent fat, which is why they can be problematic in too great of an amount. Similarly, as Chattman pointed out, you should be fastidious about making sure your bowls are completely clear of oil or other grease, as those fats can cause the same issue.

If you’re separating multiple eggs, designate a bowl just for separating and then larger ones to stash the yolks and/or whites you’ve already separated. That way, if you mess up one egg and for some reason break the yolk into the white, you only have to toss (or, better, save for scrambled eggs) one rather than the whole batch. To scoop out a small speck of yolk out of a white, Beranbaum recommended using a piece of the broken shell, which “works like a magnet to remove it”.

Where to crack the eggs. As I’ve alluded to, the best method is the method that works best for you.

According to Beranbaum, “Egg shells break most cleanly when tapped firmly on a flat surface, not on the edge of a bowl.” I, however, have always struggled with this – I seem to be too tentative or too aggressive and somehow I just end up with either a barely cracked or mashed egg that is harder to separate. So, I’m in favour of side of the bowl.

The point being, be willing to give a few different methods a try. Then make the decision for yourself. You could even try a dark-horse strategy, which I saw in Mark Bittman’s How to Cook Everything: Tapping the egg with the back edge of a knife. I’m skeptical I could do this without exploding the egg everywhere but, hey, you never know.

Separating by hand. Here’s where you need to honestly assess your comfort level. If you’re someone who’s a bit squeamish about the feeling of raw eggs in your hand, perhaps it’s not for you. But if you can set that aside and/or feel what’s most important is not messing up the egg, this could be the answer. “When separating the yolk from the white, clean hands work better than any separating device,” Beranbaum wrote. Break the egg and, using your hand as a strainer, cradle the yolk in your fingers and let the white fall through them into a bowl. Or break the egg into a bowl and then scoop out the yolk with your fingers, though you do run a higher risk of puncturing it.

Separating with the shell. This is definitely the way that looks the coolest and most professional. It’s something that can take some confidence to build up to and requires that you make a relatively clean break in the shell or else you may pierce the yolk. Break the egg and, working over a bowl, pass the yolk back and forth between the two halves of the shell, allowing the white to fall into the bowl. McGee advised “using the shell edges to cut the clingy white from the yolk”. Most of the time, this is my preferred method.

Separating with something else. Here’s a tip we ran a few years ago: “To separate a large number of egg yolks and whites, try using a clean plastic water bottle. Hold the bottle upside down, squeeze it, hold the opening over the yolk, and release; the vacuum created will suck the yolk right into the bottle. To release the yolk, just squeeze the bottle.”

Hints on storage. If you’re only using one or the other, you can stash separated egg yolks and whites in the refrigerator. FoodSafety.gov recommended using them within two to four days. Whites can be frozen with good results for up to one year. According to the United States Department of Agriculture (USDA), “Freezing yolks is less satisfactory; it causes the yolk to become thick and syrupy so it will not flow like an unfrozen yolk or blend very well with the white or other ingredients.” If you do still want to freeze the yolks, the USDA suggests mixing four yolks with a pinch of salt and one-and-a-half teaspoons of sugar or corn syrup.

Wash your hands, no matter the method. The inside of eggshells can be contaminated with salmonella bacteria, which causes a potentially serious foodborne illness. That’s one reason you ought to be scrupulous about washing your hands after dealing with raw eggs, regardless of how you separate the whites and yolks. By now you probably know the drill: Wash with soap and water for at least 20 seconds. Be sure to thoroughly clean anything else – bowls, counters, etc – that came in contact with the raw eggs. If you prefer cracking on the counter, you can follow Beranbaum’s lead and cover it with a paper towel, though you should clean the counter for extra insurance.