THE WASHINGTON POST – If you are a duck lover – and I am – duck confit is a dish you probably love to eat but have never made.

A staple at French bistros, usually accompanied by crispy potatoes and a leafy green salad, duck confit at once feels like a simple comfort and a luxurious indulgence. The glistening, crispy skin gives way to succulent meat falling off the bone in a classic French dish that, when prepared the traditional way, can seem daunting to achieve at home.

Originating in Gascony – also the birthplace of cassoulet – which is famed for its duck, confit is a centuries-old preserving method, used before the advent of refrigeration. The word ‘confit’” is the French past participle of the verb “to preserve”. While duck confit is famous, you can basically confit anything, so long as you cook it very slowly, over low heat, and store it in ample fat, which creates a hermetic seal.

I’ve shied away from making my own confit, because I believed, erroneously, that you needed lots of rendered duck fat – both expensive and hard to find – to make it. The dish has always felt costly and finicky to achieve. 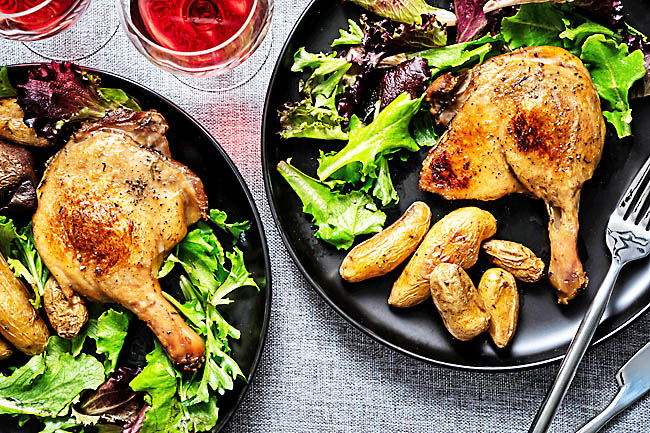 I couldn’t have been more wrong.

The pandemic quarantine, which is now approaching a year, has inspired me to tackle cooking projects I might not have otherwise, and I’m delighted to report that in this particular case, making duck confit at home is extremely easy. Most of the cooking time is hands-off, so all you have to do is stick around your home, which I’m doing a lot of these days.

As I was missing the taste of confit I’ve enjoyed in restaurants, I got to thinking: I’ve slow-roasted fish, chicken and vegetables in ample olive oil, or other fat I had on hand, to get the same succulent effect. Duck, especially the leg, is fatty and releases plenty of fat during cooking. What if, I thought, I slow-cooked duck legs just as they are? It wouldn’t be traditional confit, but I wouldn’t need vats of rendered fat to store my duck for months on end.

A quick search in my cookbooks and online confirmed making duck confit without extra rendered fat was possible. In the Blue Ribbon Cookbook (Clarkson Potter, 2010), written by cookbook author and New York Times food columnist Melissa Clark with Bruce and Eric Bromberg, the Brombergs shared that they make confit with rendered duck fat only because, as restaurant owners, they have economies of scale working in their favour. Home cooks, without a brigade of chefs and myriad multiple preparations, have no such thing. As such, buying rendered duck fat seems like a punishingly costly endeavour – and, as it turns out, completely unnecessary.

The ingredients are laughably simple: Duck legs, salt, pepper. That’s it. The dry seasonings make up the cure, but, if you’re feeling fancy, by all means dress up your duck by adding chopped herbs – fresh or dried. And, when it’s time to cook, you can add additional aromatics, if you desire. Or not.

In testing the recipe, I made batch upon batch, enlisting friends and co-workers to help nail down “the” method. I roasted at different temperatures, pricked the meat with knives and sharp needles to see if it helped with the fat rendering; used varying seasonings and aromatics; tried different cooking vessels; and experimented with pan- vs oven-crisping methods.

In the end, I settled on a very low temperature, a large, wide oven-safe skillet covered with foil, and simple but fragrant aromatics of garlic and orange peel. Though largely hands-off, you need to plan ahead: Ideally, the duck legs should cure in the refrigerator for at least one day, preferably two, and even up to three. The salt will draw out extra water and, instead, flavour and tenderise the meat.

The roasting takes about four hours (most of it hands-off) with the legs fitting snugly next to one another. To get enough fat for best results, it is best to cook quite a few of them – at least eight – at a time. For a family of four, that equals two meals. For a couple, it’s four meals, and if you’re cooking for yourself, it’s eight individual meals, which you have to cook only once!

But, duck confit might just be the quintessential make-ahead dish. Unlike the traditional duck confit, which is completely submerged in fat and can be refrigerated this way for months, this method requires freezing leftover legs after a few days of refrigeration. For our family of three, I freeze half, and serve the remainder for dinner. If there are no takers for the fourth leg, it gets added to a salad lunch the following day.

To serve the confit, I cling to a traditional presentation of roasted potatoes and a simple green salad dressed with a punchy, assertive vinaigrette. The potatoes get slow roasted on a separate sheet pan. Slip them into the oven when the duck is about halfway done. They emerge delicate and silky, slightly burnished in places and ready to mingle with the duck’s rich meat. The brightly acidic salad complements the fatty duck and creamy potatoes, merging and balancing all the flavors together.

It’s a simple meal that feels festive, indulgent and comforting all at once – with barely any effort. I wish more recipes delivered this kind of return on investment – don’t you?

Make restaurant-worthy duck confit without the fuss or expense of having to purchase pricey rendered duck fat.

Instead, duck legs cook low and slow in their own fat with barely any hands-on time. Save the cooking liquid for flavouring soups, and the rendered fat for roasting potatoes, frying eggs or to make more duck confit. The aromatic, mellow slow-roasted garlic is delicious spread on toast, blended into compound butter or served on the side of the duck legs.

Make Ahead: The duck legs need to be seasoned and refrigerated for at least 24 and up to 72 hours before cooking.

One head garlic, halved across the equator (optional)

Strips of zest from one orange (optional)

In a small bowl, combine the salt, thyme and pepper. Sprinkle half of the seasoning mixture over a large, rimmed baking sheet. Place the duck legs in a single layer on top and sprinkle with the remaining seasoning mixture. Cover with plastic wrap and refrigerate for at least 24 and up to 72 hours.

When ready to cook the duck, position a rack in the middle of the oven and preheat to 250 degrees.

In a large, ovenproof skillet or Dutch oven (a seven-quart oval oven works better than an eight-quart round Dutch oven), arrange the legs in a single layer, skin side down, so they fit snugly. Nest the garlic head halves and orange zest among the duck pieces. Cover and transfer the skillet or pot to the oven for two hours.

Remove the lid, flip the duck over, skin side up, cover with a large piece of aluminum foil, and continue to slow-roast for 1 hour and 30 minutes more, or until completely cooked through and you can wiggle a bone in the leg without any resistance.

If serving right away, transfer the legs, skin side up, to a large, rimmed baking sheet and increase the oven temperature to 450 degrees. Return the duck to the oven for about 20 minutes, or until the skin is crispy. (Otherwise, transfer the duck, the cooking liquid and all of the rendered fat to a large container with a lid, let cool to the touch, no more than one hour, then cover and refrigerate.

When ready to serve, follow reheating directions in the headnote.) Discard the orange zest before serving or storing.

NOTES: Moulard duck legs often vary in size. If yours are larger – closer to one pound each, instead of eight ounces – add about 12 hours of curing time and adjust the seasonings accordingly.

To make roasted fingerling potatoes, about one hour 30 minutes before the duck is done, on a medium, rimmed baking sheet, toss the potatoes with a generous drizzle of olive oil – or extra duck fat, if you have it – and season liberally with kosher salt.

Place in the oven and roast for one hour 30 minutes or until browned all over and luxuriously tender.