How to help strays while travelling

THE WASHINGTON POST – On a warm evening in Fez, I sat on the stoop of my Moroccan hostel swarmed by cats. Several adults feasted on the can of food I had bought in the medina. Two black kittens, tucked in the folds of my skirt, purred as I untangled their matted fur.

For many travellers, the sight of domesticated animals living outdoors can have a mobilising effect. We may rush to their aid and, overcome by a desire to help, not fully consider the health, safety or cultural implications. I didn’t think about the risks of handling those kittens until a friend roused me from the cuddle pile with a warning text that simply read “ring worm”.

“Seeing animals on the street can be a shock to Western travellers,” said co-founder of Animal Aid Unlimited in Udaipur, India Erika Abrams. “The lives of street animals, also referred to as community animals, can be extremely hard, but they can also be full of joy.”

To be sure, potential hazards exist: viruses and parasites, bites and scratches, the bemused or indignant looks of residents. But you don’t need to shy away from helping stray dogs and cats. If you know the proper way to engage with street animals, you could save a life – or at least provide temporary comfort.

“If you see any animal suffering, don’t walk by but make an effort,” said shelter manager at the Progressive Animal Welfare Society in Washington state Lisa Chastain. “Sometimes just giving food and water can go a long way.”

We spoke with animal rescue experts around the world about how to smartly and safely assist street dogs and cats without doing harm to them – or to yourself. 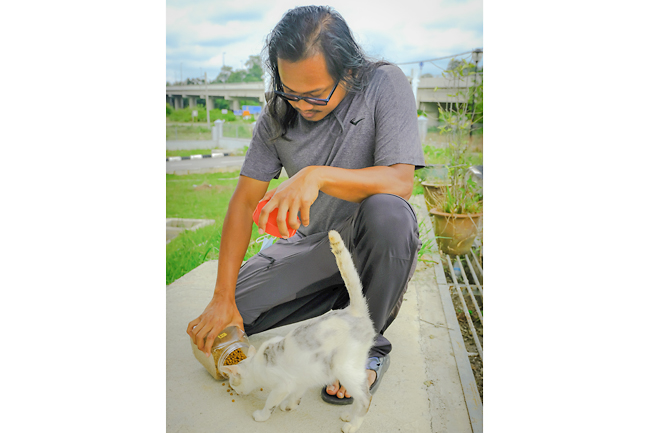 PREPARE BEFORE YOUR TRIP

Animals reside on streets in cities, suburbs and rural areas around the world. Though resources to help them vary by destination, they can often use a helping hand.

Look for organisations that offer low-cost veterinary care for local communities; conduct trap, neuter and return (TNR) programmes; run animal care facilities; or are affiliated with prominent groups in the rescue world such as Humane Society International and its domestic arm, Humane Society of the United States (US). Expatriate groups such as the Thailand Expat Pet Owners Forum or Living in Indonesia, A Site for Expatriates may be plugged into local rescue scene or can recommend a reputable vet.

If you plan to donate supplies to a local shelter or animal charity, stock up on items that are scarce or expensive in your vacation spot.

If you bring food, make sure the expiration date has not come and gone.

Street animals might not have homes in the traditional sense, but many count on a circle of committed caretakers to provide them with food, fresh water and companionship.

For instance, some communities in Phuket, Thailand, watch over the beach dogs in conjunction with Soi Dog Foundation, a rescue group based on the island. In Istanbul, residents’ devotion to the city’s cats is so endearing, their interspecies relationship became the subject of the 2016 documentary film, Kedi.

As part of their evening ritual, Abrams said, Indian households will feed the dogs chapati (flatbread) in the spirit of good karma. “Consider the cultural differences,” said Mexico-based project manager and veterinary adviser for Latin America and the Caribbean with the International Fund for Animal Welfare Erika Flores. “If an animal is roaming the streets, it may be a community dog and not lost or needing help.”

To determine whether a dog or cat has guardians, check for such telltale signs as a collar and tags, a fit physique or clipped or notched ears (exclusive to cats that have been spayed or neutered and released back to streets).

“If the community dogs look like they are in good health, let them be,” Henry said. “Please don’t take the dogs.”

Alternately, to determine whether an animal is in distress, look for protruding bones (undernourished), missing fur (skin infection) or a visible wound. If you notice any of these conditions, jump into rescue mode, but also take a minute to ask any passersby if they know this animal or any of its human family members. Then send word of the emergency.

FEED STRAYS ON A DISH – AWAY FROM THE HOTEL

If you spot emaciated animals during your daily wanderings, leave food and water along the route. But never hand-feed an animal; you don’t want to get bitten or scratched.

Choose species-appropriate foods – preferably wet food, since kibble might be foreign to an animal accustomed to scraps – or simple, unadorned proteins like chicken or tuna. Avoid items that are dangerous for consumption, such as grapes, chocolate, avocado and onions (for dogs) and, yes, bowls of milk for cats.

“If I don’t have anything with me, I will go to the nearest empanada stand and crack (the exterior) open,” said founder and director Maureen Cattieu of Cartagena Paws, an animal rescue operation in Colombia.

If there is a pack or colony residing in the area, feed the whole lot by setting up multiple feeding stations. In addition, place the food in a container instead of setting it directly on the ground. “Put it on a paper plate or in a bowl, so they don’t lick up parasites,” Cattieu said.

Choosing a location is critical. Avoid areas with heavy car or pedestrian traffic. Because dogs and cats are quick to fall into a routine, especially one that involves food, do not feed them by your accommodations. After you depart for home, the animals might continue to show up and become a nuisance to hotel management or other guests, who might demand their removal.

“Leave food in areas where they are scavenging, like by a dumpster,” Henry recommended, “and don’t feed them on a schedule.”

If you have an urge to pet a street animal, make sure the dog or cat is open to your cuddles and coos. Start by reading its body language.

Let the dog or cat approach you; never chase the animal down. If a dog is happy to see you, it will wag its tail, perk up its ears and sniff you. A friendly cat will sidle up to you, tail and ears up, and may treat your leg like a foam roller.

“They will tell you, ‘Hello, I’d like to talk to you,’” said associate director of communication at Alley Cat Allies in Bethesda, Maryland Coryn Julien. “Let them drive the interaction.”

When petting an unfamiliar dog, don’t swoop in from above like a fighter jet. Instead, walk along a curve and line up with the animal’s left or right flank. While avoiding direct eye contact, crouch down and present the palm of your hand for a “I come in peace” sniff.

“Keep in mind that street dogs, even very friendly ones, may have never had the kind of interaction your dogs at home are used to, such as belly-rubs or back-scratches, and it could be scary for them,” Abrams said. “Let them signal how much contact they actually want.”

If you see kittens without adult cat supervision, Julien said, do not relocate them. The mother might be nearby or off searching for food. You don’t want her to return home to an empty nest.

WATCH OUT FOR RABIES

After interacting with street animals, immediately wash your hands with soap and water, and throw your clothes into the laundry machine, especially if other pets are living on the property.

The possibility of picking up a disease is “extremely low”, Julien said. “You are more likely to catch something on a plane.” But as we have learned during the pandemic, practicing good personal hygiene is imperative.

The biggest threat, of course, is rabies. The World Health Organization (WHO) said the disease is nearly 100 per cent fatal to humans once clinical symptoms appear, and it is almost always (up to 99 per cent of the time) transmitted by domestic dogs. According to the Centers for Disease Control and Prevention (CDC), rabies kills about 59,000 people a year worldwide. Before travelling, check the WHO’s database or the CDC’s advisory list of countries with a high risk of rabies, which includes Thailand, Belize and Peru.

Flores said an animal with rabies will exhibit specific behaviours: It may appear as if it is choking, be disoriented or act aggressively. If possible, snap a photo of the animal, note the location of the sighting and share this information with the authorities. If you are bitten, wash the wound with regular soap (avoid fragrances) and run water over the injured spot for at least 15 minutes.

“Fifteen minutes sounds like a lot, but it is the most important instruction to follow to prevent rabies exposure after a bite,” Flores said.

After cleaning the wound, she said to seek medical attention, preferably at a local doctor’s office or travel clinic.

If you come across an animal that is suffering, help as much as your comfort level and training allows. Call in reinforcements if necessary. (Now is the time to employ your pre-travel contacts list.)

Do not try to catch the animal unless you have worked with ill or injured dogs or cats.

Transport the dog or cat to a clinic, animal hospital or vet office. Experts warn visitors to not dump the sick animal at a shelter, which might not have the space or resources to help.

Cattieu carries slip lead leashes for this purpose. You can also improvise with a rope or belt.

Place a towel or shirt over the animal’s eyes to calm its nerves.

If you prefer to wait for assistance, photograph the animal and note the location, for tracking purposes. Keep a safe distance to avoid spooking it into traffic or causing it to run off. If you can, wait until help arrives.

Once the animal is in a safe place and receiving medical attention, consider donating enough money to cover its vet care and food expenses. If you grow attached, consider adopting the animal.