How to create a ‘garden’ look in your home

THE WASHINGTON POST – Designers frequently talk about wanting to “bring the outdoors in” through design. Whether it’s accomplished by adding daylight and greenery to energize a room or choosing floral prints for the walls or upholstery, the goal is to blur the lines between inside and out. But these more obvious decorating choices perhaps miss a critical component: the feeling of being in the garden.

A designer in the San Francisco Bay area Leah O’Connell recently tried to create this feeling in her cousin’s family home in Richmond, Virginia. “Everything was done with the light and the garden in mind,” O’Connell said.

And although her choices were client-specific, they also speak to larger emerging lifestyle trends: the ever-growing interest in sustainable materials, the return of houseplants and a renewed fascination with naturalist collections, including taxidermy.

Of course, most people don’t have the space (or budget) to embark on this kind of project.

But we spoke with O’Connell and other designers about how anyone can cultivate that garden experience inside their home – no green thumb required. Here are their suggestions.

LET MOTHER NATURE SHINE
“The landscape is a constant part of the experience in the home: Spring is vibrant pinks and whites, summer is green and lush, and then there’s fall color,” O’Connell said. She chose white paint for most of the house to allow the views from the many windows to be the star of the show. But she also wanted to use green in a contemporary way. She installed custom green-gray and white tiles in a bold cubist pattern on the sunroom’s floor, and she chose a “fresh, grassy hue” from Fine Paints of Europe (No S 6020-G10Y) for the library rather than a more predictable dark green. She went with a glossy finish in that room to add a lively note. “It’s pretty strong and bright, but because they’re a young family, we wanted freshness and lacquer,” she said. 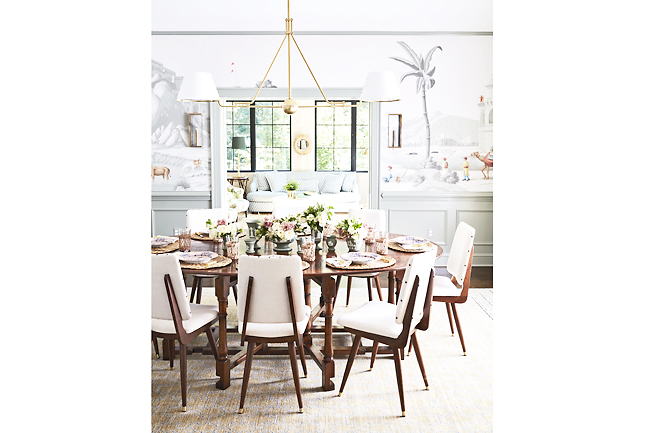 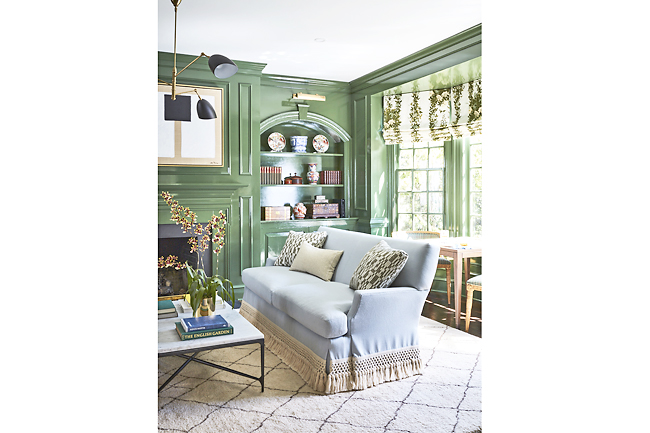 “Scenic papers grab your attention and can start conversation,” said Nashville-based interior designer Robin Rains. She also likes the way the images can reflect places or atmospheres that we find interesting. Because you’ll want as little interruption as possible in the imagery “to get the full effect,” she said, “be sure to take doorways and windows into account” when positioning the scenes.

EXPLORE PATTERNS
Botanical prints, particularly on fabrics, can visually connect a home’s interior to its surroundings. O’Connell went with Schumacher’s fern print, Les Fougeres, on a pair of chairs in the sunroom; Colefax and Fowler’s classic Bowood chintz in the breakfast nook; and Jasper’s Malmaison-Fontaine, featuring climbing passionflower vines, in the library. Florals continue in the primary bedroom, which O’Connell wallpapered with one of her own designs, Cora, named for the homeowners’ daughter. She mixed in stripes and solids to keep rooms from feeing overgrown.

“There should always be elements of surprise, too,” she added. A flick of the powder room’s light switch reveals Jennifer Shorto’s Emeralds wallpaper, a kaleidoscopic pattern of bright green scarabs inspired by 17th-century naturalist Maria Sibylla Merian’s drawings. The insects, hard-working pollinators who perhaps don’t get as much love as some of their garden cohorts, are ancient Egyptian symbols of rebirth.

ADD SOME FAUNA
Animal motifs, including taxidermy, are enjoying a bit of a moment in interior design.

O’Connell brought them into the Richmond space with antique bird prints, a serpent-framed mirror and a vintage taxidermy pheasant from Creel and Gow.

“Taxidermy can be tricky. You either like it or you don’t,” said Los Angeles designer Kevin Beer, whose home (adorned with his costumed taxidermy birds) is featured in “The New Naturalists,” a book that highlights collectors interested in such curiosities. But if stuffed critters aren’t for you, Beer said, there are other options. “Flea markets, estate sales and antique malls are a good source for inexpensive treasures, but if you’re lucky enough to have a garden, it’s all there for free: feathers, rocks, seed pods, a branch of flowering dogwood,” he said. “Just go outside. Found objects are everywhere.” Whether you disperse them throughout your home or gather them in cabinets or glass domes, as Beer does, they create a personal story and represent what “the earth has given you,” he added.

PLAY WITH TEXTURE
Incorporating intriguing textures, including nubby surfaces and natural furnishing materials, can give even a formal space a relaxed, outdoorsy feel, while re-creating the sensory, tactile experience of being in the garden. O’Connell filled the sunroom and the living room with vintage rattan, wicker and bamboo pieces, for example, sourcing pieces on Chairish and at Richmond’s West End Antiques Mall.

For the living room, she brought in a handcrafted rattan console from Soane that is woven to look like a draped fabric. She also found a faux-bois wallpaper from Nobilis with a grain for the sunroom, and gave a guest bedroom bergère chair a utilitarian edge with burlap upholstery.

DON’T FORGET THE PLANTS
“A green plant makes you feel good,” said Stephen Block, owner of Inner Gardens, a California nursery and showroom. “The world’s a mess right now – there’s a war, and we’re all feeling out of control – but plants are grounding.”

Likening today’s demand to the plant boom of the 1970s, Block said they are the perfect way to add a natural touch.

“Just don’t bring in plants that will add stress. Think about cost, length of life and ease of maintenance,” he said. “Little plants can be harder, because they have fragile root systems, whereas larger plants can withstand variations in care.”

For this Richmond home, O’Connell focussed on leafy Boston and blue star ferns, as well as umbrella plants and orchids, “to echo what’s outside,” she said. “Houseplants have a less formal feel than cut flowers, and they don’t have to be switched out all the time,” she said, noting that fresh bouquets come in for special occasions.