THE WASHINGTON POST – Punchy and crumbly, astringent and flakey, or tangy and creamy as a block of butter, blue cheese can be many things, but it’s rarely subtle. That said, if you eat and enjoy cheese – and/or sourdough bread and other fermented offerings – there’s probably a blue out there for you.

“I meet a lot of people who stumbled into blue cheese as adults, and they just think it all tastes like feet,” said Agela Abdullah of the Cheese Culture Coalition with a laugh. “They probably had something like Roquefort, or something really strong, and after one taste they don’t think they like blue cheese.”

Abdullah encourages the curious, especially those who appreciate aged or mature cheddars and Parmesans, to give blue cheese another chance.

WHAT IS BLUE CHEESE?

Produced in almost every cheesemaking country across the globe, blue cheese gets its namesake colour and signature flavour from one of two types of mould: Penicillium roqueforti or Penicillium glaucum.

All blue cheeses are made the same way as other cheeses. Cow, sheep, goat or non-dairy milk is heated, and cultures – including Penicillium roqueforti or glaucum – and rennet are added. The whey is drained off, and the curds are formed into wheels or other shapes. They may be pressed into moulds, wrapped or left exposed to the air. 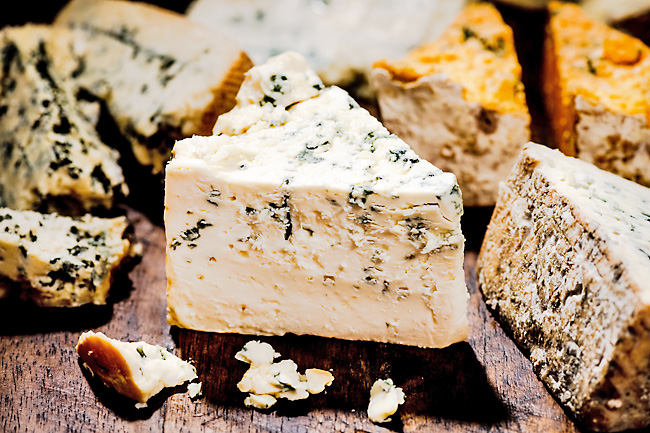 Crucially for most traditional blue cheese, makers use long needles to pierce each round or block. This allows oxygen to circulate inside, which the mould spores need to grow. Then, the cheese is allowed to age. Where it ages, at what temperature and humidity and for how long, help determine its final flavours and textures.

For blues that are pierced, the mould spores turn into blue or green veins that spread throughout the interior of the cheese.

For other blue cheeses, the mould isn’t introduced during the heating process. Rather, these cheeses are rubbed with roqueforti or glaucum. They aren’t pierced, so there’s no veining. This results in a much milder finished cheese.

Traditional, pierced blue cheeses can also be milder if they have only a few blue streaks. Stronger blues will have many blue or greenish veins throughout and are more likely to have a tan or tawny tint and very strong smell. Most of the time, the stinkier the cheese, the stronger its flavour. Still, taste is subjective. What might seem strong to you might taste subtle to someone else, so the best way to get a sense for what you might like is to try it – ideally, before you buy it.

“You can look at books or online, but the best way to find something you’ll like is to talk to a cheesemonger,” said former cheesemonger and author of Stuff Every Cheese Lover Should Know Alexandra Jones. “They’re more than happy to let you taste it before you commit to a full wedge. But not everyone has access to a dedicated cheese shop, so you can also seek out farmers market stands and talk directly to the makers.”

Cheesemonger at Lactography in Mexico City and Director of the Mexican Institute for Cheese Jessica Fernández freely admits that she “doesn’t like all blue cheeses – taste is very personal and also a cultural expression”.

Not everyone is going to like the flavour of everything, and that’s fine. But if you think all blue cheese smells bad, you haven’t given it a fair shake.

“People tend to think of blue cheese as something that exists unilaterally, when it has many expressions,” Fernández explained.

Abdullah recalls conversations with customers that always started with them pinching their noses and complaining, “‘I don’t like blue cheese, it’s too stinky’, and I would say, ‘Oh, we’re not talking about the same thing!’ There are so many types of blue cheese. Some are creamy, some are nutty, some are sweet, some are funky.”

Because of their history, large production and popularity, European blue cheeses can be easier to find in supermarkets than those made in the United States (US).

A NOTE ON COST

Unless there’s a sale, you’ll probably never find wedges of blue cheese priced similarly to bricks of colby jack or squares of American. The creation of blue cheese is a very labour-intensive process, and it’s often done entirely by hand. This is reflected in its price. Fortunately, especially if you seek out a dedicated cheese shop or large grocer with an in-store cheesemonger, you can purchase small amounts of cheese, priced per pound.

HOW TO STORE IT

Stored carefully and appropriately, blue cheese should last a few weeks in your refrigerator. Store it in the coolest, driest part – some experts recommended the crisper – and keep it well wrapped in the cheese paper it came in, if possible.

“That paper will keep it fresh longer, and if it was wrapped properly, it will be easy to rewrap,” Jones said.

“Anything to promote air circulation,” said Jones. If it’s stored while wrapped airtight, it will spoil faster. Moisture will build up inside the packaging, and the cheese will turn a yellowish colour or produce yellowish mould, and it will start to smell putrid.

Blue cheese should also be stored away from other cheeses, because its blue mould has a tendency to travel. If you store a blue cheese with other cheeses, after a day or so, they’ll turn blue, too.

Nancy Pasquariello, a cheesemonger at Greenwich Cheese Company in Cos Cob, Conneticut, has a clever tip for this.

“At home, I use a Tupperware sandwich container – which lets just enough air circulate without allowing the blue spores to spread to other cheeses – as a mini home cheese cave for my blue cheeses, which I store in the crisper,” she said.

HOW TO SERVE IT

Blue cheese is distinctive and complex enough to be eaten on its own. On a cheeseboard, blue is usually positioned as the strongest selection, opposite the mildest cheeses, like fresh chevre and buttery bries.

But there are many exceptions. Blue cheeses with stronger flavours tend to go well with a bite of something sweet: slices of fresh pear or apple, a handful of grapes, dried figs or honey. Milder blues, or those with woodsy or herbal flavours, taste nice with fresh or sun-dried tomatoes, roasted garlic, walnuts, hazelnuts, mustard, olives or roasted mushrooms.

If you’re looking for something crumbly, for a salad or blue cheese dressing, consider Cashel, a Danish blue, Maytag, Rogue Creamery’s signature blue or Roquefort.

For a creamy, meltable blue, for burgers or pasta or stirred into a soup, try Cambozola, Fourme d’Ambert, Stilton or Gorgonzola Dolce.

Finally, if you’ve tried a few or more and found that blue cheeses are not for you, stick with what you know and love.

“There’s a whole universe of cheese out there,” Jones said. “If you love blue cheese – great! Try them all. But if you’re just not into blue, that’s okay, too.”