How to buy shrimp

THE WASHINGTON POST – If you’ve ever stepped up to the seafood counter to buy shrimp, you’ve likely felt flooded with options. Farm-raised or wild? Brown, white or pink? Fresh or frozen? Shell-on or peeled and deveined? What do those numbers on the package mean? And that’s just to name a few. It’s enough to make your head spin.

Familiarising yourself with those various categorisations can simplify the process. Here’s everything you need to know when shopping for shrimp.

ENVIRONMENTAL AND SOCIAL CONCERNS
First things first: Let’s address the labor and environmental issues surrounding the crustacean. The Monterey Bay Aquarium’s Seafood Watch page lists various types of shrimp, country or region of origin, the body of water they came from and the fishing gear used with a recommendation – certified, best choice, good alternative, or should be avoided completely – based on its environmental impact.

However, any shrimp that’s processed in any way, which is almost all shrimp with the exception of live seafood, is exempt from United States Department of Agriculture (USDA) regulations requiring labeling with information about how it was raised or where it is from.

“Seafood is different than the other proteins. It’s still a fairly fragmented industry. There are so many producing countries, especially with shrimp, and there are so many consuming countries. So you’ve got products coming from everywhere and then going to everywhere,” says Steven Hedlund of the Global Seafood Alliance.

“It can be a bit confusing for the consumer, and that’s why we encourage them to look for eco labels like ours,” which provides the Best Aquaculture Practices (BAP) certification. 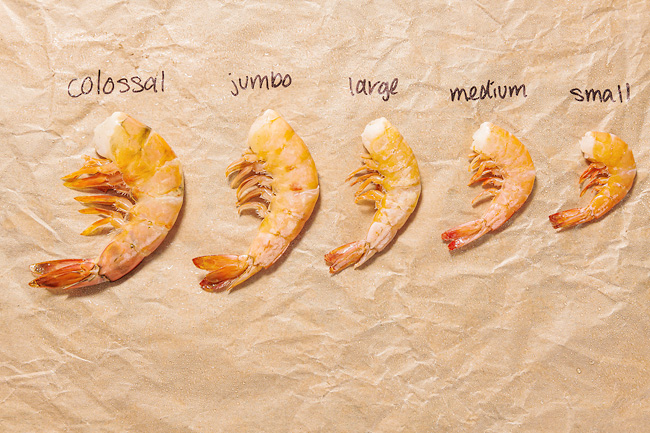 Other organisations that provide similar certifications include Marine Stewardship Council, Aquaculture Stewardship Council (ASC) and Naturland. But even if a product is certified, use of labels is voluntary, so Hedlund recommends asking the retailer if you don’t see one.

In addition to sustainability, certain organisations, such as BAP and ASC, also take into account social issues as part of their certification process. For instance, BAP’s standards encompass “not just environmental responsibility, but also social accountability, animal health and welfare, and food safety,” Hedlund says. “So they’re pretty comprehensive.”

TYPES
There are about 2,000 species of shrimp, but only a few are widely consumed. The most common ones you’ll encounter at a grocery store or seafood market are named after their appearance: brown, white, pink and tiger, which have dark stripes similar to the animal.

Pink are “some of the tastiest shrimp you can find”, Dan Nosowitz writes in Serious Eats. In a comparison of pink, white and tiger shrimp, Cook’s Illustrated “found that white shrimp had the firmest flesh and the sweetest taste.”

And for Steve Evans, owner of Jessie Taylor Seafood in Washington, DC, his favourite are brown shrimp from the Gulf. (They are also his company’s top seller.)

In general, they are all relatively mild and taste pretty similar, especially after you douse them in butter and garlic or season them aggressively, such as in a seafood boil. But you might be able to notice a slight difference in flavour and texture in simpler preparations, such as steaming or poaching for shrimp cocktail.

Evans accredits the superior flavour to the environment in which the shrimp are grown, saying that the saltwater imparts more flavour than farm-raised shrimp. Cook’s Illustrated agrees: “We’ve found that wild shrimp have a sweeter flavor and firmer texture than farm-raised, making their higher price worth it.”

Another type you might encounter is rock shrimp, so-called for their tough shell. They boast a firmer texture and some people say they have a sweeter taste that reminds them of lobster.

At the end of the day, the types are all pretty interchangeable. “A shrimp is a shrimp, the only thing different is the size,” Evans says.

SIZING
While recipes may call for “medium”, “large” or “jumbo” shrimp, there’s no industry standard for naming, meaning that one person’s “large” could be someone else’s “jumbo.”

Instead, when considering size, you want to look for a “U” followed by a number, or two numbers separated by a slash or hyphen. These digits represent how many shrimp make one pound.

The most-prescriptive recipe writers will include the name and the number so there isn’t any confusion. But if you have a favorite recipe that only says “one pound large shrimp” in the ingredient lists, here’s a rough guide you can use for what that means:

When cooking shrimp, as with any other ingredient, larger items will take more time than smaller items. So opt for larger shrimp for grilling or when you want to get a nice sear, and use smaller shrimp for things like fried rice.

HEADS, SHELLS AND VEINS
Most people prefer their shrimp beheaded, so whole shrimp aren’t quite as common. But the heads pack a lot of flavour. (Leaving the heads on also increases the rate of shrimp spoilage when not frozen).

Shrimp heads are great for soups, seafood boils and any other preparation where you want to infuse the cooking liquid with tons of shrimp flavour. You can even deep-fry the heads for what Kevin Pang in The Takeout describes as “a sweet and creamy seafood kettle-fried potato chip”.

As with heads, shrimp shells can add a boost of flavour. And while the vein doesn’t always look pretty and can sometimes be gritty, it is perfectly safe to eat.

But if you want peeled and deveined shrimp for a recipe, I’m an advocate of doing it yourself to both save money and have shrimp shells to make stock. Evans tells me that 90 per cent of the shrimp they sell at Jessie Taylor Seafood has the shell on.

FRESH, FROZEN AND COOKED
“Fresh” shrimp is often a myth as much of what you encounter on display in seafood cases was previously frozen and thawed. However, even if it was thawed recently, you can still find excellent quality shrimp sold this way.

The first thing to check is the smell – there really shouldn’t be one.

They should smell clean and like a fresh body of water. If they smell like ammonia or off in anyway, they are best avoided.

Texture is the second key indicator – fresh crustaceans should have a nice firmness to them. “You don’t want something that you can just take it and squeeze it and it mushes right up – then you know it’s old,” Evans says.

I like to use fresh shrimp the day of purchasing, but they are usually good for a couple of days.

A more reliable source for shrimp (where you don’t have to stick your nose in seafood) is the freezer section of the supermarket.

All of the bagged shrimp you see in the freezer cases has been individually quick-frozen, which preserves the texture of the seafood during the freezing process. Once frozen, shrimp is good for a couple of months.

To thaw, simply place the shrimp in a bowl of cold water, and they should be good to go within a few minutes.

The one thing to look out for with frozen shrimp is chemicals.

“Whether farmed or wild caught, the cheaper the shrimp, the more likely it is to have been treated with chemicals, particularly sodium tripolyphosphate and sodium bisulfite,” Melissa Clark writes in the New York Times.

The former causes the shrimp to absorb water, which can affect how it cooks and the texture; the latter could be an issue for people who have sulfite sensitivities.

You can steer clear of both simply by checking the ingredient label on packaged shrimp. For shrimp without packaging, stick to those with shells to avoid sodium tripolyphosphate.

Lastly, never buy cooked shrimp if you can avoid it. It’s often overcooked and you’re better off just cooking it yourself.