How do coffee and tea compare?

THE WASHINGTON POST – Do you start your mornings with a potent dose of caffeine from a freshly brewed cup of Joe? Or do you prefer a slightly less caffeinated nudge from a warm and gentle cup of tea?

Whatever your preference, scientists have found that regularly drinking coffee or tea can provide a variety of health benefits.

But how do coffee and tea compare in a head-to-head match-up? We took a look at the research, and here’s what we found.

ROUND 1: A SOURCE OF FIBRE

Did you know that your morning coffee includes a dose of fibre? One study found that on average, coffee has between 1.1 and 1.8 grammes of fibre per cup, depending on whether it’s filtered, espresso or instant.

That might not sound like much. But it’s more fibre than you’ll find in orange juice, which has about a half gramme of fibre per cup. You’ll still need to eat plenty of fruits and vegetables to get the recommended 25 grammes of daily fibre, but two or three cups of coffee a day can help you get there.

A cup of tea on the other hand typically will not help you meet your daily fibre requirements – unless of course you decide to munch on the tea leaves.

Score one for coffee. 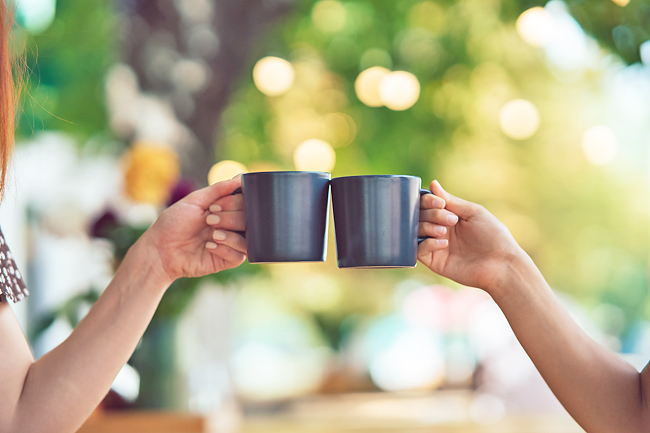 Need to get some work done? Studying for a big exam? The caffeine in both coffee and tea will help you concentrate. Studies show that caffeine can improve your attention span, vigilance, alertness and reaction time. But too much caffeine can lead to jitteriness, which can end up hurting your performance.

So, which is better, coffee or tea? One study asked people to drink four cups of coffee or tea throughout the day. Both beverages had similar effects on alertness and cognitive performance.

But the tea had one big advantage over coffee: It had enough caffeine to aid performance, but not so much that it disrupted sleep.

Score one for tea!

ROUND 3: A BOON TO THE GUT MICROBIOME

Coffee and tea are good sources of polyphenols – plant compounds that are thought to confer many health benefits. Studies suggest that polyphenols can lower your risk of developing chronic diseases, and they are “rocket fuel” for beneficial bacteria that make up your gut microbiome, the communities of trillions of microbes that live inside our guts, said Professor at King’s College London Tim Spector. Coffee has significantly more polyphenols than green tea, and green tea has more polyphenols than black tea.

Spector and his colleagues can tell whether someone is a coffee drinker just by analysing their poop. “There are specific microbes that seem to grow pretty well in people who drink a lot of coffee,” he said. They haven’t found a similar effect in tea drinkers.

This round goes to coffee.

ROUND 4: LOWER RISK FOR HEART DISEASE

According to large population studies, coffee and tea both appear to be good for your heart, lowering risk for heart disease and stroke.

But these studies aren’t conclusive – it may be that coffee and tea drinkers have a lot of other heart-healthy habits, like exercising more or eating healthier diets. But it appears the antioxidants and polyphenols in coffee and tea have a protective effect on heart health.

Drinking decaffeinated coffee – about two to four cups a day – has also been linked to reductions in heart disease. This suggests that any cardiovascular benefits from drinking coffee and tea probably stem from compounds other than caffeine. There are more studies linking coffee to heart health than there are for tea. But you can’t go wrong either way.

Many studies over the years have found that coffee drinkers have lower rates of cancer, including a meta-analysis of 59 studies across 40 cohorts that showed regular coffee drinkers had a 13 per cent lower risk of developing cancer compared to seldom or never drinkers.

The data aren’t conclusive, but the American Cancer Society said coffee contains hundreds of biologically active compounds, including some that have been shown to reduce inflammation, prevent damage to cells, and regulate genes involved in DNA repair.

“Whether it’s cancer, obesity or heart disease, inflammation is the enemy, and one way you can dampen inflammation is by drinking coffee,” said Professor of Medicine at Harvard Medical School and the author of Coffee! The Magical Elixir Sanjiv Chopra.

So far, studies haven’t found a link between tea consumption and cancer prevention. One meta-analysis of 113 studies found “little evidence to support the hypothesis that tea drinking is associated with

cancer risk”. In this round, at least from the studies so far, coffee is the clear favourite.

A cup of coffee can produce a short-term spike in blood sugar levels due to the caffeine it contains. Yet large studies show that people who routinely drink coffee are less likely to develop Type 2 diabetes.

Associate Professor of Preventive Medicine at Northwestern University and an expert on coffee, tea and caffeine metabolism Marilyn C Cornelis said this could be due to coffee’s large concentration of chlorogenic acid, a polyphenol that’s been shown in some studies to improve insulin sensitivity and blood sugar control.

While tea does not contain chlorogenic acid, it does have other plant compounds that are thought to be beneficial for blood sugar control. But studies looking at the relationship between tea consumption and diabetes risk have produced conflicting findings.

Some suggest that having four or more cups of green, black or oolong tea daily can reduce diabetes risk. A meta-analysis of randomised trials found that green tea could reduce blood sugar levels.

But other studies have found no clear link between tea and diabetes risk.

Ultimately experts said the evidence that coffee may be at least somewhat protective against diabetes is stronger than it is for tea. Another win for coffee!

If you want a smooth and gentle beverage that might even melt some stress away, then look no further than tea – or as the famous author PL Travers called it, “balm for the soul”.

Studies have found that when people are stressed, drinking green or black tea can help them feel more relaxed and lower their levels of cortisol, the stress hormone.

Studies suggest that this is in part due to L-theanine, a compound found in tea – particularly green and black teas – that seems to promote relaxation. “L-theanine has kind of a calming effect,” Cornelis at Northwestern said. “It’s sometimes even included in melatonin supplements to help with sleep.”

Compared to tea, coffee contains much higher levels of caffeine, and caffeine is known to stimulate cortisol levels and elevate your mood. But as anyone who has ever had one too many energy drinks or cups of coffee can attest, caffeine can also cause jitteriness, anxiety and insomnia when consumed in excess.

Long story short, if it’s relaxation you’re after, then a cup of tea is your safest bet. Another round goes to tea.

For tea drinkers, both green and black tea are associated with greater longevity. In one recent study, scientists followed a half million people over a 14-year period and found that people who drank at least two cups of tea daily had a nine to 13 per cent lower risk of dying during the study period compared to non-tea drinkers. The study was carried out in the United Kingdom, where most of the tea drinkers consumed black tea. But large studies of green tea drinkers have reached similar findings.

Black tea and especially green tea are rich in polyphenols and other beneficial compounds, “and these compounds could potentially reduce stress and inflammation in the body”, said a staff scientist at the National Institutes of Health and lead author of the recent tea study Maki Inoue-Choi. More research is needed to understand the potential mechanisms involved. As for coffee, a July study followed almost 172,000 people and found that those who drank 2.5 to 4.5 cups of coffee per day had a 30 per cent lower likelihood of dying during the roughly seven years of the study compared to people who didn’t drink coffee. Even those who drank their coffee with a teaspoon of sugar seemed to gain a benefit.

These studies come with an important limitation: They are observational, meaning they can’t prove causation. But tea and coffee provide so many health benefits that it’s reasonable to conclude that they could lower your odds of an early death, said experts. Chopra at Harvard Medical School pointed out that at least five large studies in leading medical journals have now shown that coffee drinkers have lower mortality rates. “These studies keep coming and coming,” he said.

This round is a draw.

AND THE WINNER IS

In this battle over health benefits, coffee comes out on top. Coffee drinkers can raise a mug to fibre, microbiome health and lowering risk for cancer and diabetes. But tea drinkers, do not despair. Tea is undoubtedly good for your blood pressure, cholesterol, stress levels, mental health and productivity. And both drinks are winners when it comes to heart health and longevity. And for tea, especially, there are likely more health benefits that are yet to be discovered.

One reason coffee is linked to more health benefits than tea is that it’s been the subject of far more studies, said Chopra at Harvard Medical School. “I tell my tea drinker friends that we may learn in the years to come that tea has additional benefits,” he added.

If you are neither a coffee nor a tea drinker, don’t feel pressured to change. The Dietary Guidelines for Americans state that people who don’t drink coffee or tea aren’t encouraged to start. Plain or flavoured water and milk are also good healthy options.

There is one final category in the tea and coffee smackdown that should be considered: popularity. It’s been estimated that the world drinks three cups of tea for every cup of coffee.

And tea is the second most popular beverage in the world. The first is water.