THE WASHINGTON POST – Before you crack open John Ehrenreich’s new book, The Making of a Pandemic: Social, Political, and Psychological Perspectives on Covid-19, both the rather bland title and the lengthy compilation of footnotes may give you the impression that you are about to read a dry academic text. Instead, the book turns out to be an examination, indeed an indictment, of the last few decades of American politics, business and society.

This pandemic book spends relatively little time on the years of the pandemic, but it paints a grim picture of decisions and events from dozens of years before.

Ehrenreich’s critique won’t be a surprise to people familiar with his work, and his main point presents a compelling, and occasionally edgy, case for our deep malfeasance. He wants to go beyond a technical analysis of why we found ourselves short of ventilators. He wants us to look back further to pinpoint the policies that caused the pandemic to hit us so hard – things we don’t immediately associate with the coronavirus, such as the growth of factory farms, the overuse of antibiotics and policies that promote individual wealth over equality.

If you’ve had enough epidemiological takes on the pandemic, a psychologist’s take exploring the disastrous choices we made over the last 50 years is an intriguing one. The unwillingness of the United States (US) to promptly follow basic and proven standards to prevent transmission is responsible for hundreds of thousands of unnecessary deaths.

Ehrenreich wants to know not why a virus spread as it did (that is what they do, after all) but why we ended up at each other’s throats, why pandemic denialism became a right-wing cause (not only in the US but globally) and how a country that has spent decades maligning government is supposed to function in situations where the government is the most important actor. 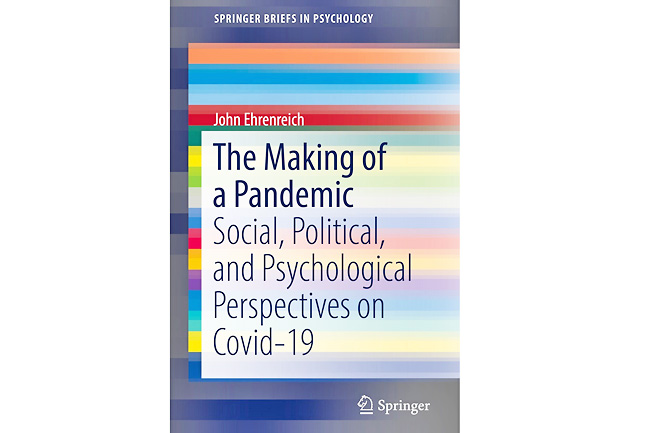 He puts us all on the couch and tells us that the losses we are suffering are symptoms of deeper pathologies. Infectious diseases spread all the time, he argues. They become pandemics because a lot of conditions align, a good number of them of our making. His list includes inequality in how we live and work, unchecked capitalism, shortsighted policymaking, man-made climate change, and our federalist system, which is anaemic in a crisis. The social-scientist take is that the excess deaths and related suffering from the pandemic are just the more visible manifestations of what has been plaguing us in less visible, but very real, ways for decades.

The author, a longtime State University of New York professor, doesn’t shy away from politics, and he doesn’t spare Donald Trump’s response – though he seems to see Trump more as a symptom than the root cause. His political analysis at times lumps President Biden in too closely with Trump, though there is almost no resemblance between their pandemic responses, and at other times (too carelessly for some readers) lumps Democrats in with Republicans. The book has an anti-right-wing flavor, but it is heavily seasoned with notes of anti-establishment politics of all sorts. No one need be spared, but public health advocates and policymakers are likely to take some exception.

He does try to take an anthropological approach to some tough questions, such as why conservatives are less compliant with public health measures. This exploration is a rather uncomfortable psychological assessment of conservatives. Conservatives’ personality types show less empathy and concern for disadvantaged groups than liberals’, Ehrenreich posits, and so they are less interested in public health measures to protect others. They lack trust in government and therefore what government scientists say, they are more dogmatic, and they are more swayed by intuition than by reason. He cites studies for his analysis, but his brush is broad. Some of his psychological observations on why people reacted the way they did feel more on point than his political analysis: that some people prefer blame and denial to fear of death, and that the minimizing of the pandemic is a form of wishful thinking.

One hazard of trying to cover every potential social problem over five decades is that the book sometimes oversimplifies and cuts a few logic corners. Ehrenreich complains about the inadequacy of public health resources but doesn’t acknowledge that the botched performance of the Centers for Disease Control and Prevention undermined public confidence in making such investments. He minimises the role of social media in disseminating disinformation because he doesn’t seem to understand (or chooses to ignore) how algorithms and targeting work so destructively on such platforms.

But the places where readers might take exception don’t diminish Ehrenreich’s overall premise; there is way more to nod your head at than not. He is perhaps most convincing when pointing to the corrosive impact of the tight corporate hold on society. He shows quite clearly how greed and unchecked capitalism are behind most of the ills we experience – the lion’s share of which are visited on the poorest, the most vulnerable, and Black and Brown communities.

The book is not to be read for practical solutions. Ehrenreich’s main conclusion – that the only way to prevent future pandemics is to end deforestation and factory farming, and to address racism, poverty and political polarisation – won’t leave the reader with hope that we are headed anywhere good soon. It’s not just a gridlocked Congress and a polarised public that are at issue, but the complexity of many of these policy areas (such as the need for affordable food for developing countries). In any event, in the real world, even far more modest efforts to invest in a better public health system aren’t getting traction.

Too many of us come to the topic of the pandemic both weary and entrenched in our views based on how it’s affected us and the people we know. Ehrenreich’s worldview isn’t well-hidden in his telling of events. If you share this view, the book will confirm what you believe, and it is chock full of additional data for your arsenal.