THE WASHINGTON POST – What’s more fun than a snowstorm? An even bigger snowstorm! Warming temperatures and shorter winters may have you thinking it’s over for snow in the Washington, DC, area, but New Jersey State Climatologist and Rutgers University professor David Robinson, said rising temperatures may actually cause snowstorms to dump more snow.

Snowstorms are complicated. “To get snow, you need moisture and you need subfreezing temperatures,” Robinson said.

Without moisture in the air, there can be no precipitation, rain or snow. Robinson said there is evidence of snowstorms becoming stronger because of the relationship between moisture and precipitation.

“The warmer the air becomes, the more moisture it holds. So, if it’s warming and still cold enough to snow, you can get more snow,” Robinson said. Of the 10 biggest snowfalls recorded in Washington, five have occurred in the past 25 years, according to the National Weather Service. During that period, average winter temperatures have been steadily rising. The National Weather Service’s “unofficial” D.C. climate data shows that in 1996, the average winter temperature was 35.3 degrees. In 2020, it was 42.8 degrees.

This data seems to support Robinson’s explanation that warmer temperatures may lead to more powerful storms. 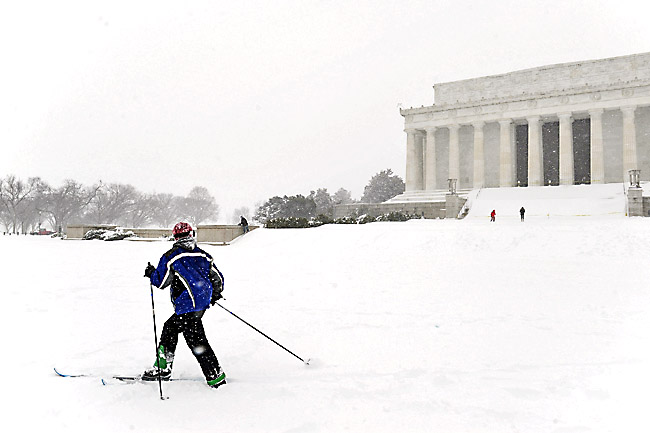 Still, it is hard to make conclusive statements about the relationship between higher temperatures and snow because of how infrequently snowstorms occur.

“These big snowstorms are pretty rare, so it’s difficult to really determine if we’re seeing any change in how often they occur and how strong they are,” Robinson said.

What scientists need is more data, and some of it could come from you.

Robinson and his team use volunteer-collected weather observations to make maps and tables about weather patterns.

“We have a volunteer-observing programme that is part of the (Community Collaborative Rain, Hail and Snow Network),” Robinson said. “We’ve even got kids in elementary school who, with their parents, make daily precipitation observations and go online and enter them as part of a national database.”

The network began in Colorado in 1998 and now is in every state. Robinson began making his own weather observations as a fourth-grader. You can find out more about the program at the website, cocorahs.org.

For now, while weather observations suggest that rising temperatures may make winter shorter and less cold, the snow is still falling.”In the Washington area, near-record, if not record-breaking (snowstorms) are still part of the weather scene,” Robinson said.

Until temperatures of entire winters stop dropping below freezing – 32 degrees – we will continue to see powerful storms. Once temperatures are consistently above freezing, potential snowstorms become rain.

According to Robinson, that time could come sooner than we think. He said, “When we look back, years from now, we may see that this was the breaking point.”