MONTREAL (AFP) – Expectations heading into a United Nations (UN) biodiversity conference in Montreal were about as low as they could be.

But a broad recognition that it was now or never for nature – and a flurry of late diplomacy by China – helped seal a “historic” deal on a night of high drama.

Dubbed the “ugly duckling” of global policy, the COP15 negotiations were snubbed by world leaders who had just attended a far higher-profile climate summit in Egypt.

Beijing, which held the presidency of the talks, at first appeared to have a hands-off approach, and the defining issue – whether the rich world would pledge enough money so their developing counterparts could protect vanishing species and habitats – seemed too great to surmount.

“For months, there was the question: Where is China?” a high-level source close to the matter told AFP.

What’s more, relations between China and Canada, which had to step in to host the event because of China’s strict COVID rules, have deteriorated in recent years. 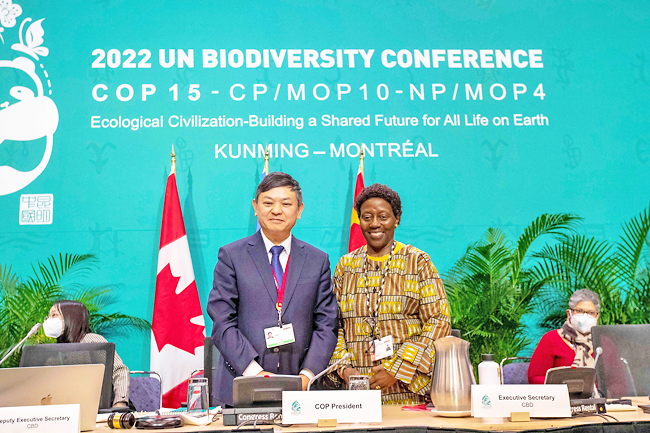 Canada’s 2018 arrest of Chinese telecommunications executive Meng Wanzhou at the request of the United States was followed quickly by China arresting two Canadians.

What’s more, “it’s strange to have a Chinese presidency on North American soil,” said the high-level source – and early signs did nothing to dispel assumptions that China in charge would mean a weakening of ambition.

In the first week, China let Canada run the show shepherding talks on the key issues, from finance to the cornerstone target of protecting 30 per cent of land and oceans by 2030.

But as the clock ticked down, it was China that took charge of the text, in an approach described as “gentle” diplomacy: having subject experts and political representatives work in a calm, even environment, according to another diplomatic source.

“China closed out the deal and cornered the developing countries with the USD30 billion financing pledge by 2030,” said a third source, a European negotiator.

When countries of the Global North sought more ambitious targets from the South, China responded by telling them they’d need to up their financing. And Beijing acted as a neutral arbiter, not aligning itself with the Group of 77 as it normally does.

“They’ve taken the risk of putting their own reputation on the line for something many thought they weren’t the natural leaders of,” said a British-Gabonese conservationist and minister of water, forests and environment of Gabon Lee White.

Nor is China a natural champion of environmental issues, having badly polluted its air and waters and degraded much of its land through agricultural production – a process it is trying to reverse through a greenification campaign.