His Majesty on state visit to Cambodia

Earlier in the morning, His Majesty received in audience Deputy Prime Minister and Minister of the Royal Palace of Cambodia Samdech Chaufea Veang Kong Som Ol, who presented the state visit programme and invitation card as well as two baskets of flowers from King of Cambodia His Majesty Preah Bat Samdech Preah Boromneath Norodom Sihamoni; and Her Majesty Queen-Mother Norodom Monineath Sihanouk. 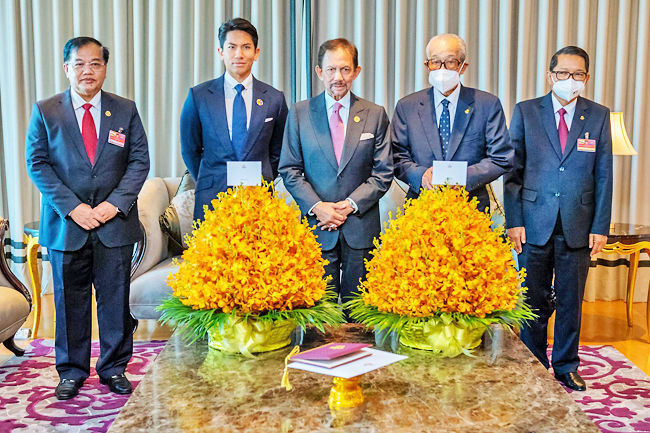 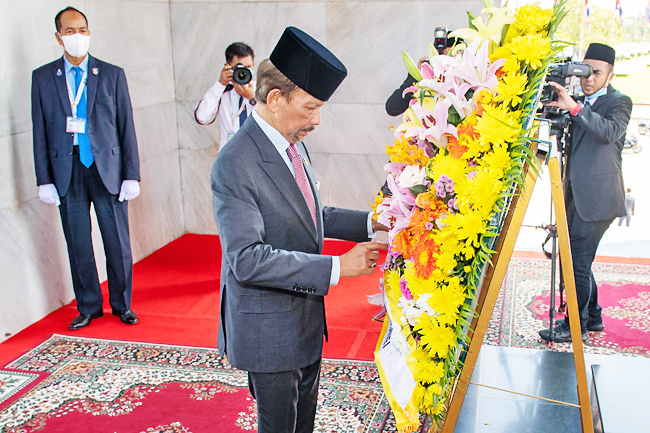 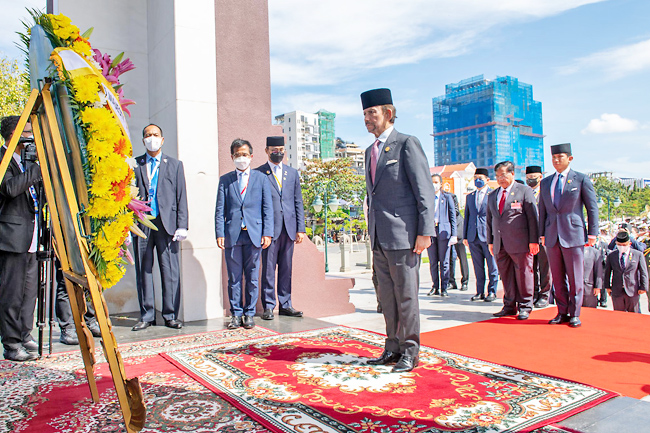 Their Majesties then proceeded to the special dais to receive the salute of honour accompanied by the national anthems of both countries, and a 21-gun salute.

This was followed by an inspection of the royal guard of honour mounted by members of the Royal Cambodian Armed Forces.

Their Majesties later proceeded to the Throne Hall for the royal audience.

During the meeting, His Majesty the Sultan and Yang Di-Pertuan of Brunei Darussalam and His Majesty the King of Cambodia touched on matters that strengthen the progress of bilateral relations between the two countries, including cooperation in the areas of trade, defence and people-to-people exchanges.

At the meeting, His Majesty congratulated Cambodia on the success of its ASEAN Chairmanship this year.

His Majesty highlighted that Brunei Darussalam and Cambodia continue to share warm and friendly ties since the establishment of diplomatic relations 30 years ago.

In this regard, His Majesty welcomed further opportunities to deepen cooperation in all areas, adding that the signing of the memorandum of understanding (MoU) on bilateral consultations was timely as it has provided a platform for the two sides to work together for mutual benefit.

Amid the current geopolitical uncertainties, His Majesty highlighted the importance of food and supply chain security, and expressed appreciation of Cambodia’s continued export of jasmine rice to Brunei Darussalam, even during the height of the COVID-19 pandemic.

His Majesty thanked the Cambodian prime minister as ASEAN Chair for his leadership towards ensuring that ASEAN’s community-building priorities were met, despite the challenging global environment.

At the end of the meeting, a joint statement was issued.

The JCBC will facilitate consultations and cooperation in all areas of mutual interest and promote the implementation of the agreements concluded between the two countries.

The JCBC will also cooperate and exchange views on bilateral and international matters on a wide range of areas of mutual interest, including trade, investment, education, health, tourism, culture, youth, sports, human resource development and any other areas as may be mutually agreed upon by both sides.

His Majesty first proceeded to the Independence Monument, where His Majesty was greeted by Cambodia’s Deputy Prime Minister and Minister of the National Defense Samdech Pichey Sena Tea Banh. His Majesty then laid a wreath at the monument.

The Independence Monument, which was built in 1958, is an Angkorian-style tower to memorialise Cambodia’s independence in 1953 as well as to honour those who died while defending the country.

Shortly after, His Majesty visited the Norodom Sihanouk Memorial – located east of the Independence Monument – where His Majesty was greeted by Kuy Sophal. His Majesty then laid a wreath at the monument.

During the state visit, His Majesty the Sultan and Yang Di-Pertuan of Brunei Darussalam also attended a luncheon hosted by His Majesty the King of Cambodia, at Preah Reach Damnak Serei Mongkol, Royal Palace Ground.