THE WASHINGTON POST – All families are complicated in their own way. Throwing the mob into the mix complicates them in ways all their own.

Best-selling writer and historian Russell Shorto knew that his grandfather was connected to the mid-20th-Century mafia in Johnstown, Pennsylvania. That wasn’t a mystery. Russ Shorto, for whom his grandson is named, had a long rap sheet and controlled a lucrative illegal enterprise for years with his partner and brother-in-law “Little Joe” Regino. Johnstown was a thriving manufacturing city at the time, and Shorto and Regino ran numbers, sports books, pool halls, poker rooms, pinball games and pretty much any activity that sated the betting desires of thousands of factory workers leaving their shifts. But Shorto the writer didn’t know much else about his grandfather.

The story he remembers hearing is that his grandfather wanted his father to become a partner in crime, but his dad refused, and their relationship withered.

Family stories are funny things, though, capable of morphing and shifting over the years until the unknowns outnumber the knowns. With Smalltime Shorto traces his decision to learn the truth about his family’s past, discover its long-buried secrets, and explore unforgotten slights and how decisions made decades and decades ago continue to leave their mark. 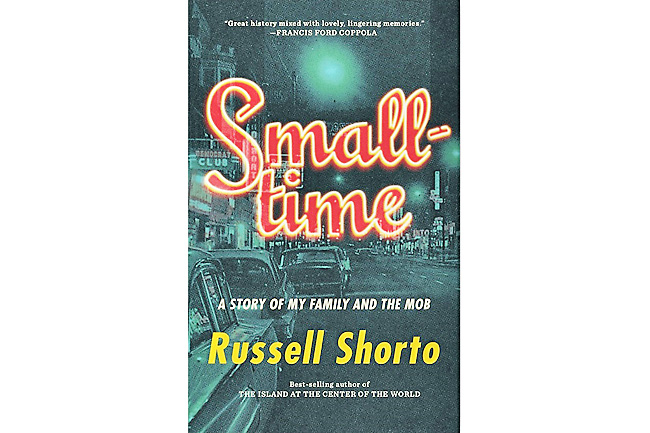 But Shorto’s story is not just about his family. It’s also a social history of a place and time – industrial Pennsylvania from the early 20th Century on – as it is being shaped by an influx of immigrants who are resented for their arrival, forced into the worst jobs and homes, and struggling to survive outside of an official America that makes their path harder at every opportunity.

“No one with an Italian background had ever had a political job in the county,” Shorto writes in a chapter about the roadblocks erected by establishment forces to keep immigrants from gaining any power. “Back in 1911, the mayor of Johnstown made it a campaign promise that no one of Italian descent would work in his administration, not even as a street cleaner.”

The growth of the mob in cities like Johnstown, Shorto posits, was largely a result of the denial of access to legal routes to power and wealth. If the front door wasn’t open, the back door would have to do. For his grandfather, born to Italian immigrants in 1914, the back door meant helping his widowed mother make and sell contraband during Prohibition, and eventually helping run a small-town illegal enterprise with ties to the big-city mobs in New York, Pittsburgh and Philadelphia.

There are long talks with relatives, with men who knew his grandfather from his gangster days, with retired police officers and others, but no one can offer a penetrating look at the man who once was second-in-command of a criminal operation that controlled an entire city. Who really was Russ Shorto? It’s hard to say.

At times, the flatness of his grandfather’s character dampens the narrative. Why, a reader can justifiably ask, do I care about this person? The answer, unfortunately, is never fully apparent. A history of a gangster in a bygone time promises to be riveting, but there’s not enough there to make this a book you can’t put down. The spectre of an unsolved mob murder hangs over the story, hinting at a much deeper, darker tale. That too proves to be a promise that doesn’t quite deliver.

What does pay off is a series of revelations that unfold in the book’s final third, where Shorto focusses less on his grandfather and more on his father and their own strained relationship, and all that brought it about. Here the memoir becomes more personal and poignant, and less of a historical account weighted down by asides about process and efforts to corroborate stories.

“Thank you,” he tells his father, “for showing me how to do history, which, it suddenly occurs to me, is nothing if it doesn’t involve a consideration of how human beings try to balance their inevitable failures and stay afloat amid currents that are destined to sink them.”