NEW YORK (AFP) – With his nimble fingers and child-like enthusiasm, Danny Cortes re-creates in miniature the hip-hop-infused street scenes of a gritty New York. But what began as a hobby has since brought him fame in the rap community and profitable sales even at Sotheby’s prestigious auction house.

As he spoke from his workshop in the Bushwick neighbourhood of Brooklyn, he sat among recycled objects found on the streets.

On his table was a current project, the tiny replica of a worn and dirty building facade. Near a bricked-in window, a plastic bushel basket had been hung: a poor man’s basketball hoop.

“This represents my childhood,” Cortes said, putting touches to the model in his preferred medium, polystyrene.

“Everything looked like this: abandoned, empty, a lot of drugs in the area.” 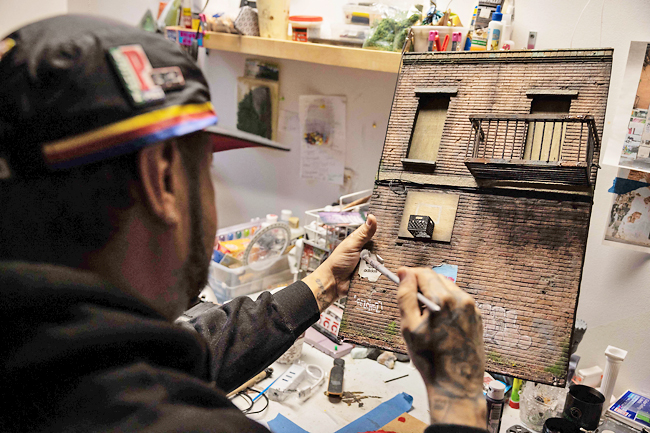 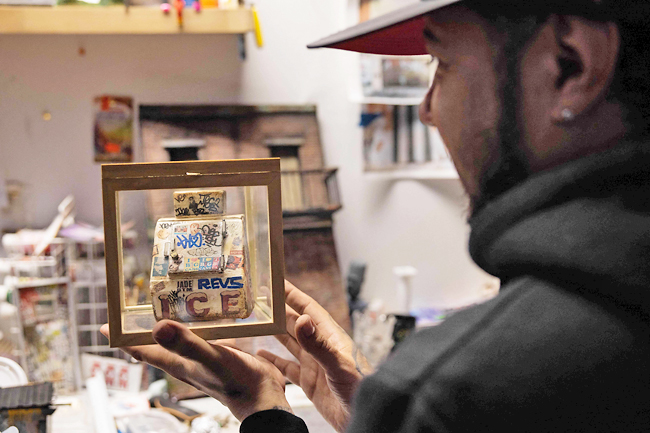 One of his recent creations is a modest Chinese restaurant with a battered yellow sign and with its red-and-mauve brick walls covered with graffiti.

Standing outside the restaurant – the real one – Cortes, sporting a black jacket and a baseball cap over his round face – smiles as he told how New York rapper Joell Ortiz, who grew up in the neighbourhood, insisted on buying the model, saying, “Yo, I need that.”

“Ten thousand dollars,” Cortes said, adding that “the first piece I sold was like USD30, and I was so happy that I got USD30”.

The artist builds collectibles based on the most banal of urban scenes, “the little things that we pass by every day” and pay no attention to, but which collectively form the unique cityscape that is New York.

One of his first signature works was a rendering of a simple white commercial ice box – the kind that sits outside corner groceries, the words “ICE” in block red letters on its side, and often covered in graffiti, which Cortes reproduces with meticulous detail.

His repertoire also includes a classic ice-cream truck like the one in Spike Lee’s 1989 film Do the Right Thing its musical chimes guaranteed to bring young New Yorkers running.

His work resonates with nostalgia, and he often incorporates tributes to mythical local rappers like Notorious BIG and the Wu-Tang Clan.

Cortes was not always an artist – he has worked in sales, construction, and at a homeless shelter.

But the pandemic changed his life, pushing him to take more seriously what had been an enjoyable pastime.

After he displayed his first creations on social media, his work “just took off”, he said.

Artistic label Mass Appeal, which partners with rap legend Nas, commissioned him to do a model of a ghetto-blaster boombox for the cover of a mini album by DJ Premier (Hip Hop 50: Vol 1).

In March 2022, four of Cortes’ works were sold in a hip-hop auction at Sotheby’s.

They included an ice-cream truck that went for USD2,200.

And he has branched out, building a miniature replica of an Atlanta restaurant for its owner, the rapper 2 Chainz.

But Cortes’ heart remains in Brooklyn.

“He has really captured the grimy, gritty atmosphere that was the birthplace for a lot of the ’90s style of hip-hop music,” said former head of Tommy Boy Records and a consultant on the Sotheby’s auction Monica Lynch.

Through his work, Cortes said he wants to document a place where “there is a lot of change”, particularly his Bushwick neighbourhood.

Now a trendy locale favoured by artistic types, it is also a symbol of gentrification – but Cortes said he’s okay with that.

“I think it’s good, I think it’s safer, even though Bushwick is always gonna be Bushwick,” he said. “There are more opportunities.”