LONDON (AP) – Spectacular military parades, street parties up and down the country, drone and light shows at Buckingham Palace, and a surprising starring turn from Queen Elizabeth II and Paddington Bear: Britain’s four-day Platinum Jubilee extravaganza has been one long party demonstrating the extraordinary popularity of the monarch after 70 years on the throne.

Britain’s longest-reigning monarch only made three brief appearances during the long holiday weekend dedicated to marking her service. But the absence of the leading lady didn’t dampen the nation’s party atmosphere, with millions turning out for patriotic street shindigs, barbecues and picnics in their cities and villages.

The four days of celebrations were bookended by two Buckingham Palace balcony appearances by the 96-year-old queen – one on Thursday as festivities kicked off, and the other on Sunday at the finale of a massive street pageant. Crowds erupted into three cheers as the queen waved and smiled on the balcony along with other working royals after the traditional Trooping the Colour military parade on the first day. She then attended a special beacon-lighting ceremony at Windsor Castle that night, but the brief appearances left her tired. She missed a service of thanksgiving at St Paul’s Cathedral the next day.

The queen, who has curtailed her public appearances in recent months due to problems moving around, also skipped the prestigious Epsom Derby horse race and a pop concert staged outside Buckingham Palace on Saturday. 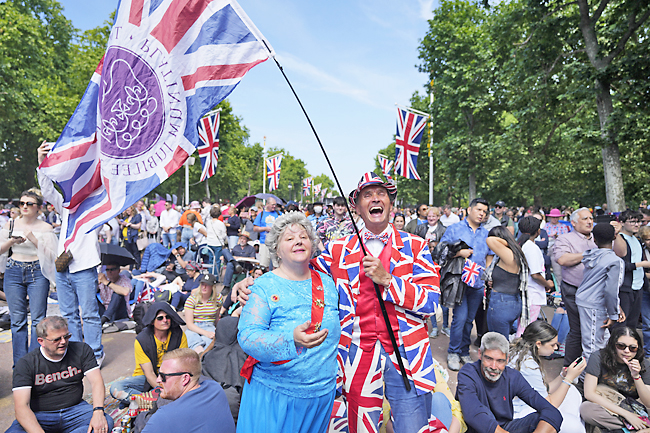 She did, however, delight the country when she starred with a computer-animated Paddington Bear in a comedy sketch played at the start of the concert.

The video showed the queen sharing a chaotic afternoon tea with the furry character – and revealing that she stored marmalade sandwiches in her famous black handbag.

The concert, headlined by Diana Ross, the rock band Queen and others, thrilled a crowd of 22,000 with drones flying over the palace that created a giant corgi and teapot in the sky. Crowds of tens of thousands packed the Mall in front of Buckingham Palace for the climax of the festivities, which saw a huge, colourful pageant parade through central London on Sunday.

The gold state coach, which transported the queen to her coronation in 1953, led the procession.

A hologram of Elizabeth as she looked 69 years ago was shown at the coach’s windows, a poignant reminder of how young she was when she acceded to the throne.

That was followed by 6,000 performers who told the story of the queen’s life along with a parade of vintage cars, double-decker buses, a giant moving wedding cake and huge puppets.