AP – To the naked eye, the Mako Compressor Station outside the dusty West Texas crossroads of Lenorah appears unremarkable, similar to tens of thousands of oil and gas operations scattered throughout the oil-rich Permian Basin.

What’s not visible through the chain-link fence is the plume of invisible gas, primarily methane, billowing from the gleaming white storage tanks up into the cloudless blue sky.

The Mako station, owned by a subsidiary of West Texas Gas Inc, was observed releasing an estimated 870 kilogrammes of methane – an extraordinarily potent greenhouse gas – into the atmosphere each hour. That’s the equivalent of burning seven tanker trucks full of gasoline every day.

But Mako’s outsized emissions aren’t illegal, or even regulated. And it was only one of 533 methane “super emitters” detected during a 2021 aerial survey of the Permian conducted by Carbon Mapper, a partnership of university researchers and NASA.

The group documented massive amounts of methane venting into the atmosphere from oil and gas operations across the Permian, a 250-mile-wide bone-dry expanse along the Texas-New Mexico border. Hundreds of those sites were seen spewing the gas over and over again.

“We see the same sites active from year to year. It’s not just month to month or season to season,” said a research scientist at the University of Arizona Riley Duren, who leads Carbon Mapper.

Methane’s earth-warming power is some 83 times stronger over 20 years than the carbon dioxide that comes from car tailpipes and power plant smokestacks. Congress and the Environmental Protection Agency (EPA) have largely failed to regulate the invisible gas. 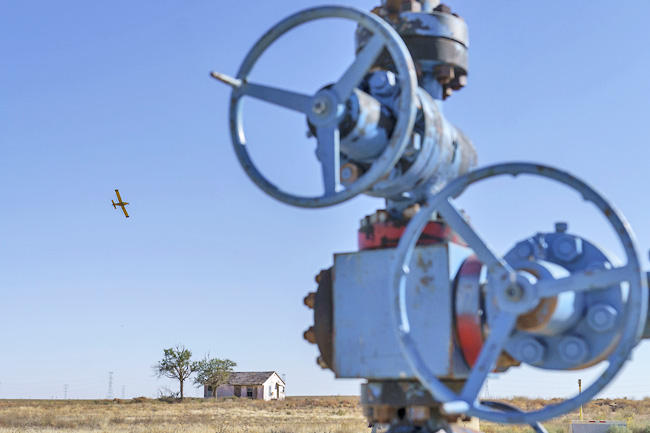 That leaves it up to oil and gas producers – in some cases the very companies who have been fighting regulations – to cut methane emissions on their own.

The Associated Press (AP) took the coordinates of the 533 “super-emitting” sites identified by Carbon Mapper and cross-referenced the locations with public records to piece together the corporations most likely responsible.

Just 10 companies owned at least 164 of those sites, according to an AP analysis of Carbon Mapper’s data. West Texas Gas (WTG) owned 11.

The methane released by these companies will be disrupting the climate for decades, contributing to more heat waves, hurricanes, wildfires and floods. There’s now nearly three times as much methane in the air than there was before industrial times. The year 2021 saw the worst single increase ever.

In addition to West Texas Gas’s Mako site, AP observed a large plume of gas escaping from tanks at a WTG compressor station about 15 miles away in the Sale Ranch oil field. Carbon Mapper estimated that emissions from that site averaged about 410 kilogrammes of methane an hour.

In a statement, Midland-based WTG said it routinely conducts its own overflights with gas detection equipment and within the last six months had either “repaired or upgraded” nine of the super emitting sites that AP asked about, including Mako. The company was “actively addressing” another site, though it declined to provide specifics. WTG said it inspected the last site and found no leak.

AP found Targa Resources, a Houston-based natural gas storage, processing and distribution company, was the closest operator to 30 sites that were emitting a combined 3,000 kilogrammes of methane per hour. Targa did not respond to a detailed list of questions from the AP.

“Reducing air emissions from the oil and natural gas sector is a top priority for the administration and for EPA,” said Tomás Carbonell, EPA’s deputy assistant administrator for stationary sources. Methane, he added, is “helping drive impacts that communities across the country are already seeing every day, including heat waves and wildfires and sea level rise”.

But proposed rules to address emissions most oil and gas sites are still under review, and if implemented will likely face legal challenges.

To track emissions, the United States (US) government keeps an inventory of methane released into the atmosphere. Those figures are used by policymakers and scientists to help calculate how much the planet will warm.

AP found the government database often fails to account for the true rate of emissions observed in the Permian.

For example, Devon Energy reported releasing methane equivalent to 42,000 metric tonnes of CO2 for a year of operations in the Permian Basin. AP’s analysis, using the detected emissions, shows they would emit that much in just 46 days.

A spokesperson for Devon said the company is committed to reducing its methane emissions and being transparent about its progress.

The EPA could not provide AP with a single example of a polluter being fined or cited for failing to report, or underreporting emissions.

At an international climate summit in November, the US and more than 100 other countries signed on to a Global Methane Pledge to reduce methane emissions by 30 per cent by 2030.

To meet that deadline, the American oil and gas industry would have to reduce emissions at a rate far beyond anything currently seen.

The industry says it is working toward that goal.

“To be able to capture more methane emissions makes sense from a business perspective,” said Frank Macchiarola, a senior vice president at the American Petroleum Institute, an industry trade group. “It’s the product that we ultimately want to bring to market.”

But climate scientists and environmentalists warn the industry’s incremental efforts are nowhere near enough to avoid dire consequences for humanity.

“Methane is responsible for 25 per cent of today’s global warming, and we can’t limit future warming to two degrees Celsius if we don’t drastically cut those emissions,” said Ilissa Ocko, a senior climate scientist at the Environmental Defense Fund, a group that campaigns for climate action.

“We have the tools to cut methane in half and the faster we do that, the better off our climate and communities will be.”