He said the helicopter’s pilot lost control during a hover training session, and the aircraft crashed from a height of about four metres.

“Following that, the helicopter overturned and the tail end was pulled out and thrown about 20 metres from the body of the helicopter.

“The victims, namely the pilot and passenger aged 73 and 53 respectively, were only slightly injured and received follow-up treatment at the Tengku Ampuan Rahimah Hospital in Klang,” he said in a statement yesterday.

Shamsul Amar added that the Air Accident Investigation Bureau under the Ministry of Transport would be conducting a thorough investigation into the incident.

Meanwhile, the Civil Aviation Authority of Malaysia (CAAM) said the helicopter that crashed in the incident yesterday was operated by ‘My Heli Club’.

CAAM Chief Executive Officer Captain Chester Voo said the Robinson R66 helicopter took off from the Sultan Abdul Aziz Shah Airport in Subang at 9.05am and reached the Pulau Indah airspace in Port Klang at about 9.21am.

“The (helicopter) pilot reported normal operations at 9.45am, and the Kuala Lumpur Air Traffic Control Centre did not receive any emergency calls after that.

“However, the helicopter involved then crashed in an open area near Pulau Indah between 9.45am and 10am today,” he said in a statement.

He said upon receiving information about the accident, CAAM activated the ‘Aeronautical Rescue Coordination Centre’.

Several witnesses at the scene of the incident said they saw a helicopter flying at a low altitude in the area this morning.

Abdul Hamid Ahmad, 44, a resident of Kampung Perigi Nenas said he saw the helicopter flying eight-storey’s high at about 9.40am.

“The weather at the time was quite windy and cloudy, the helicopter flew quite low, but it did not look like it would crash,” he said when met at the scene.

Another resident of the village, Mohd Yusuf Jamaluddin, 60 said this was the first time he saw a private helicopter in the area, as usually, only police helicopters were seen conducting monitoring activities.

Checks by Bernama at the scene earlier found the area to be cordoned off by the police, while members of the fire brigade were seen inspecting the crashed helicopter. 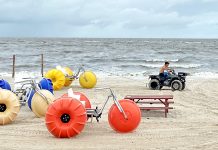