HINDMAN, KENTUCKY (AP) ­- Withering heat was descending on a region of eastern Kentucky already reeling from massive flooding, forcing residents labouring to clean up after the deluge to cope with an oppressive new threat.

The grim task of cleaning up from the flooding continued, but rising heat and humidity prompted officials to open cooling centres as forecasters warned of the risk of heat-related illnesses and some residents remained without power.

In Knott County, Kirsten Gomez said her flood-ravaged doublewide trailer was being gutted by her husband and cousin.

They were stripping drywall, flooring and cabinets ruined by floodwaters from nearby Troublesome Creek that engulfed their home. “It is so miserable. The humidity is so high, it takes your breath,” Gomez said. “Your clothes stick to you. Your hair sticks to you. This mud is caked on you. But I’m just blessed that we don’t have rain anymore.”

The blast of heat and humidity comes as some residents try to salvage what they can, and as search-and-rescue crews continued looking for people unaccounted for days since the floods hit.

“We’re just fighting through this and hoping that this weather don’t make it too stressful. It don’t get a lot worse than what it is.” 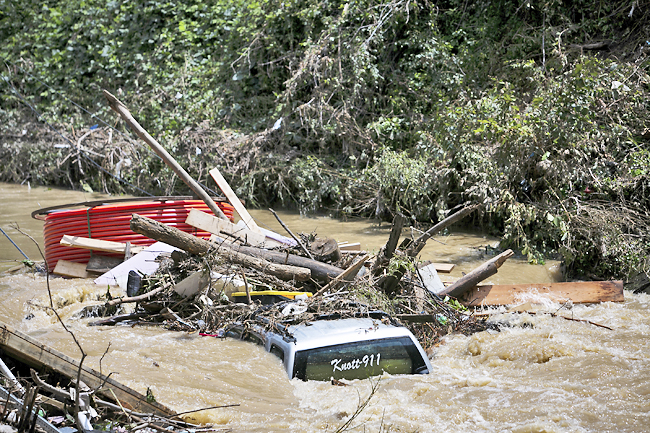 “We’ve got to make sure that those that are vulnerable either have a cool place with family… or that we get them to cooling stations,” Kentucky Governor Andy Beshear.

“We didn’t make it through the worst flooding that we have ever seen in our lifetime to lose somebody now in the heat.”

“It is absolutely devastating out there,” Beshear said. “It’s going to take years to rebuild.

People left with absolutely nothing. Homes that we don’t know where they are, just entirely gone. And we continue to find bodies of our brothers and sisters that we have lost.”

On a positive note, Beshear said most of the people reported as missing to Kentucky State Police had been found and that cellphone service had been restored though much of the region.

The historic flooding that inundated communities in eastern Kentucky also hit areas just across the state line in Virginia and West Virginia, where some people also remained without power.

Meanwhile, he warned Kentuckians to be mindful of the heat as the cleanup continues.

The flooding has forced some eastern Kentucky districts to delay the start of school.

Several schools in the region were damaged, officials said, and the focus now is on helping families whose homes were damaged or destroyed.

“Just that in and of itself is going to take time before we can even start the conversation with the community about where kids are going to go to school,” said Superintendent John Jett in Perry County, where classes were supposed to start August 11 but have been delayed.

Two of the Perry County district’s nine schools suffered severe damage and one will likely have to be rebuilt because of a partial collapse, he said.

In Knott County, Superintendent Brent Hoover said classes would be delayed until the district can assess damage at the high school, an elementary school and the technology centre.

In Letcher County, Superintendent Denise Yonts said six of the district’s 10 schools were damaged by flooding and two staff members died in the disaster.

The district is committed to getting students back into classrooms as soon as possible to restore some sense of normalcy, she said.

“Our community as a whole is devastated,” Yonts said.

The disaster was the latest in a string of catastrophic deluges that have pounded parts of the United States this summer, including St Louis. Scientists warn that climate change is making such events more common.