ANN/THE STAR – There are plenty of places around the world that are said to be haunted, and Malaysia is no exception.

From eerie-looking buildings to dilapidated abandoned mansions, there are many of these dark tourism landmarks in Malaysia that are worth checking out, if you actually dare to, that is.

We’ve listed some of these buildings and properties found in the country that are either reportedly “haunted” or at least have an interesting history behind them.

A word of caution: Visit at your own risk.

Villa Nabila is located on a hill in Johor Baru, overlooking the Danga Bay. The villa is incredibly run down and covered with overgrown foliage, a result of over 40 years of neglect and abandonment.

Although there is a lot of information on the place, much of it is actually hearsay or rumours. The fact is, there is no real evidence as to who built the place, who owned it or what exactly happened that led it to its deterioration. Reportedly, there is documentation showing that the place was once called “Christine Palace”, but even that has never been confirmed. 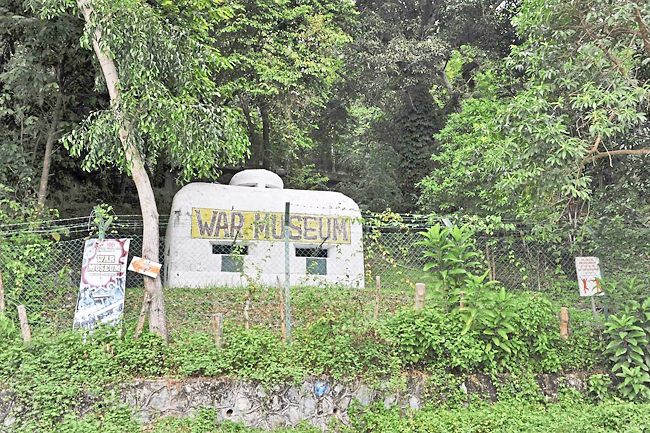 The most commonly-known version of the story is truly a gruesome one. It is said that the villa was originally owned by a wealthy couple, who named the place after their only daughter, Nabila. When the couple died tragically, all their fortune went to Nabila.

Their live-in maid then killed Nabila in order to have the fortune for herself. She stuffed the body into the walls of the main house – the estate is said to be haunted by Nabila’s restless spirit.

Another version of the story states that the maid killed the whole family and buried their bodies within the grounds of the estate.

The fact that nobody knows the real story is what’s truly interesting here. Surely, some older neighbours would know at least something about the villa? If a murder (or a few murders) were committed at the place, wouldn’t there be police reports?

Some folks who have visited Villa Nabila (including ghost hunters and dark tourism enthusiasts) say that the place does give off some weird “vibes”, although most can’t really explain or describe the feeling.

In 2015, a documentary-style movie called Villa Nabila by filmmaker Syafiq Yusof was released (it is currently streaming on Netlifx).

Supposedly based on true events, it tells the story of a construction worker who was asked to tear down the place. Although Villa Nabila is not open to the public, you can still see parts of it from the outside or from across the street.

Also known as the 99 Door Mansion by locals, Caledonia House is located within the Byrom Estate in Nibong Tebal, Penang. It is a 158-year-old mansion with an unsolved murder mystery attached to it.

The mansion was built sometime in the 1840s and is said to have been owned by a wealthy British family called the Ramsdens. The property is called 99 Door Mansion as it has 10 rooms, each with six doors, and plenty of doors in other parts of the building.

In 1948, its owner John St Maur Ramsden, who was once the managing director of the Penang Rubber Estates Group, was said to have been shot twice in the back of his head as he was walking up the stairs in his home.

There were reportedly many suspects in the case, and a series of court trials took place, but no one was ever found guilty – the case remains unsolved today. After the tragic incident the mansion was left empty and unkept.

In the 1960s, it was rumoured that a bomoh (witch doctor) entered the premises and practised his witchcraft there, opening the mansion’s “100th door”, as a way to get in touch with other-worldly spirits.

Except for the murder, other spooky stories surrounding this mansion are mostly rumours.

However, some locals do say that many will still refrain from being anywhere near the place after sundown … just in case.

Today, Byram Estate is owned by SJ Lee (according to the myPenang) and has a regular caretaker. The Penang Heritage Trust and the local council have been pushing for the 99 Door Mansion to be recognised as a heritage building, though there is no update on this.

Imagine if this building was restored to its former glory.

Located in Bukit Batu Maung, the Penang War Museum used to be a British Army fort in the 1930s. When World War II occurred, the fort was taken over by the Japanese Army and converted the place into a base for prisoners-of-war.

It is said that a fierce Japanese executioner Tadashi Suzuki carried out the beheadings of soldiers and locals with a sword, and tortured over 100 people, there.

The particular spot where the beheadings were said to take place is known as Ghost Hill.

Today, the museum is open to the public as a dark tourism attraction with replicas of torture equipments and tools.

There are also displays recreating haunting scenes from the war.

Mimaland, or Malaysia in Miniature Land, was Malaysia’s very first official theme park that opened in 1975. Located in Gombak, Selangor, the theme park was surrounded by a tropical rainforest and has a large pool in the middle. It was the talk of the whole country as it had large-scale dinosaur statues all around the place, a water slide, rides and other cool attractions.

For nearly two decades, the park was a popular place for locals and foreigners to visit.

However, in January 1993, tragedy strikes when a Singaporean tourist drowned in the pool.

In the following year, a landslide happened which caused the place to deteriorate even further. There was also the issue of safety.

The park temporarily closed for renovations and improvements, but the cost and upkeep was just too much for the owners and they officially shut the place down in 1994.

Mimaland has been deserted ever since and a big part of the park is now back to being a jungle, with trees and plants growing wildly within the property. Many of the props and equipment can still be found, though, as the former owners never really cleared the place.

There have been claims of “strange” and “mysterious” happenings taking place there too, but today, curious folks who visit Mimaland are mostly only interested in finding the park’s hidden props, especially the dinosaurs.