A recent study of 1,275 men and women found that those with relatively feeble handgrip strength, a reliable marker of overall muscle quality and strength, showed signs of accelerated ageing of their DNA. Their genes appeared to be growing old faster than those of people with greater strength.

The study, although preliminary, raises the possibility that visiting the gym or doing a few push-ups in our living rooms might help turn back the clock and make our cells and selves more biologically youthful, whatever our current age.

A wealth of research already tells us that strength is good for us. People who lift weights are substantially less likely to develop heart disease, high blood pressure and many other chronic illnesses than those who skip resistance exercise.

Strength also can be an augury of how long we’ll live. In a 2015 study of almost 140,000 adults in high-, middle- and low-income nations, reduced handgrip strength was closely linked to mortality in people of all incomes, predicting risks for early death better than blood pressure, which is often considered one of the best indicators of life span.

“Grip strength is a simple but powerful predictor of future disability, morbidity, and mortality,” the authors of an accompanying editorial concluded, its effects holding true “not only in older people, but also in middle-aged and young people”. 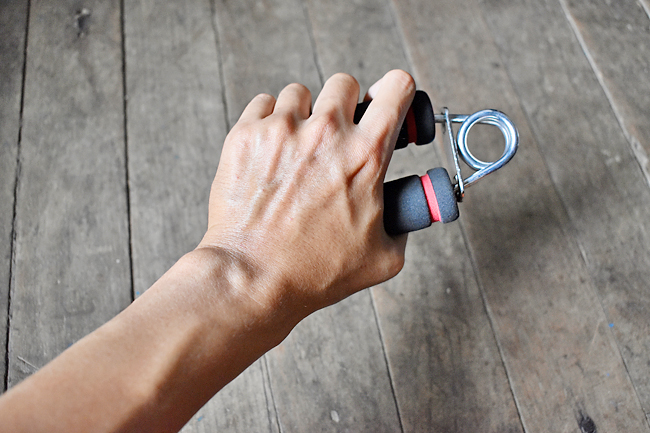 How, though, might a sturdy grip today influence our well-being tomorrow?

“Grip strength is often called a biomarker of ageing,” said associate professor of physical medicine and rehabilitation Mark Peterson at the University of Michigan in Ann Arbor, who led the new study. “But the biological context for why it’s so predictive of positive and negative outcomes during ageing hasn’t really been clear.”

Maybe, Dr Peterson and his colleagues speculated, epigenetics might be key.

Epigenetics involves changes to the numbers and actions of certain tiny molecules that attach like mollusks to the outer surface of a gene and affect how and when that gene turns on. Epigenetic changes occur in response to our diets, exercise habits and many other aspects of our lives, and affect our DNA and health.

Epigenetics also may signal how rapidly we are ageing, recent science shows.

About a decade ago, researchers began analysing huge data sets of people’s epigenomes, which are the epigenetic changes unique to each of us, and using that data to develop what are called “epigenetic clocks” that estimate our biological age.

Chronological age is, of course, how old we are, according to our birth certificates. Biological age indicates the functional age and health of our cells and bodies. The two numbers can differ substantially.

Epigenetic clocks use algorithms to assess biological age, based on the various patterns of molecules on genes. If the clock suggests your biological age exceeds your chronological one, you’re aging faster than normal and, to be blunt, approaching frailty and death at a speedier clip than someone whose biological age is lower.

Aware of the latest epigenetic clock research, Peterson and his colleagues wondered whether strength might be linked to epigenetic age, for better and worse.

They began gathering records for 1,275 participants of an ongoing study of aging who had already given blood and used a squeezable device called a hand dynamometer to measure their grip strength.

The researchers then determined everyone’s approximate epigenetic age from their blood cells, using three different clocks. (Multiple labs have developed proprietary epigenetic clocks, which vary slightly.) They also checked death records for up to 10 years after people joined the study and, finally, cross-tabulated this data against people’s grip strength.

They found that, in general, the weaker someone’s grip strength was, the higher his or her epigenetic age. Their DNA appeared less youthful than that of their stronger contemporaries, leaving them potentially more vulnerable to earlier illness or death.

“Overall, this study lends further support to the association of epigenetic age with frailty,” said professor and director of the Genetic and Molecular Epidemiology Laboratory Guillaume Paré at McMaster University in Hamilton, Ontario. Paré has studied epigenetics but was not involved in the new study.

The study raises new issues, though.

“A key question that remains to be addressed is the causality of these associations,” Paré said.

Although the study shows that people with punier muscles are also people with elevated epigenetic age, it can’t prove that weakness directly caused anyone’s accelerated ageing.

Other factors might be at play, such as income, diet, medical history or other aspects of someone’s lifestyle.

But even with its limitations, the study’s results are provocative, Peterson said, suggesting that our muscular oomph – or its opposite – may influence our epigenomes and, in the process, how fast and well we age.

If you wonder about your current strength, many gyms have hand dynamometers you can use to test your grip.

If your results show your grip is on the weaker side, you don’t need to focus just on your hands. You can strengthen your grip by getting stronger, in general. In fact, most of us don’t need to parse our precise grip strength to realise we could benefit from more strength training. “The usual exercise pyramids, showing how much exercise you need, put strength training at the top,” Peterson said, “as if it’s the part you need the least of. But strength should be at the bottom, I think, at the base. It’s foundational to health”.

So use that gym membership you bought this month. Get a dumbbell to keep at your desk. Try some body weight training or finish a burpee or three. You might wind up altering the age of your epigenome, as well as the brawn of your biceps.