VADO HONDO, GUATEMALA (AFP) – In buses and trucks, Guatemala on Tuesday returned thousands of migrants to Honduras after police and soldiers halted their northward march to the United States (US), dashing their hopes of a better life there.

On Monday, security forces broke up the caravan of some 4,000 migrants who had massed in the Guatemalan town of Vada Hondo on the first leg of their journey of thousands of kilometres through Central America on foot.

They were being returned on Tuesday to the El Florido border crossing where most of the group had entered Guatemala last Friday.

According to Guatemalan migration authorities, some 3,500 people have already been returned to Honduras, several hundred children among them.

Mexico, which has closed off its own border to the advancing caravan, also sent buses to help bring the migrants home.

But many refused to board. 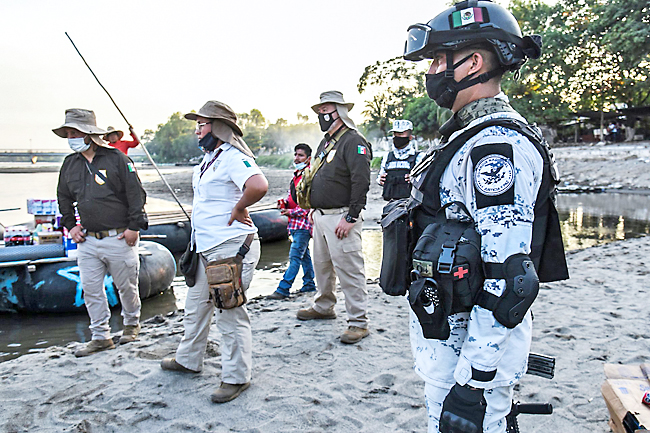 “I’d rather die than go back to Honduras,” Alexander, a 24-year-old taxi driver who lost his job because of the coronavirus pandemic, told AFP.

“What will I do in Honduras, other than to die of hunger or gang violence?” Saying they are desperate to escape poverty, unemployment, gangs and drug violence and the aftermath of two devastating hurricanes, the migrants aimed to cross Guatemala and Mexico, walking all the way to the US.

They were hoping for a warmer welcome, and a better life after years of anti-immigrant rhetoric by Donald Trump.

Some 9,000 have set out from Honduras since Friday.

But the caravan was held up since Saturday at Vado Hondo in southeast Guatemala, some 50 kilometres inside the border.

The migrants waited to be allowed to pass, sleeping outdoors and blocking a key road where a massive logjam of cargo trucks built up as a result.

Police took action on Monday after a failed dialogue with the migrants, who were asked to clear the route for the cargo to get through before it spoils.

Officers used tear gas and batons to clear the road and break up the caravan.

Several migrants were hurt, as well as police hit by stones hurled by some in the group, AFP reporters saw. Women carrying small children were among those to flee before the police.

“If we had money we would not be here heading north. They treat us like dogs, it should not be like this,” said one woman.

Another, who gave her name as Angie, was on the verge of tears. “We weren’t stealing, we are good people. We only want to get through,” she told AFP.

Thousands of Guatemalan security personnel were deployed under strict orders to stop anyone without travel documents or a negative coronavirus test from going any further.

Twenty-one migrants who had received coronavirus tests along the way were positive.

Washington has warned the would-be asylum seekers in an official communication not to “waste your time and money”.

Several dozen people who avoided controls have since reached Ciudad Tecun Uman, the border post between Guatemala and southwestern Mexico. But they have little hope of getting past the Mexican National Guard deployed at the border.

More than a dozen caravans, some with thousands of migrants, have set off from Honduras since October 2018, but all have run up against thousands of US border guards and soldiers under Trump.

The latest attempt has given rise to neighbourly tension, with Honduras complaining about the forceful tactics meted out to its citizens, while Guatemala accuses Tegucigalpa of doing nothing to prevent the caravans from forming.

Guatemala migration service spokeswoman Alejandra Mena on Tuesday welcomed what she termed the “voluntary return” of the migrants to El Florido.

But many are not ready to give up quite yet.

“We are tired, but we will resist and I hope that Guatemala will let us through,” said Carlos Valle, 34.

Added Marta del Cid: “We are sad, desperate, hungry, exhausted by the walk, but I intend to continue, to get to the US” she said.