PARIS (AFP) – There was a time when a reunion between Lionel Messi and Pep Guardiola looked distinctly possible, but today (Wednesday, 3am Brunei Time) they will be on opposite sides again when Paris Saint-Germain play Manchester City in the Champions League.

Had it not been for Jack Grealish, perhaps things would have turned out differently.

City announced the GBP100 million signing of Grealish from Aston Villa on August 5, the same day Barcelona revealed Messi would not be staying at the Camp Nou.

A year ago, when Messi tried to force his departure from Catalonia, City appeared the most
likely destination.

In the end Barcelona prevented the six-time Ballon d’Or winner from leaving then and 12 months later Messi was prepared to stay put until it became clear the financial mess at the Camp Nou meant he could not. 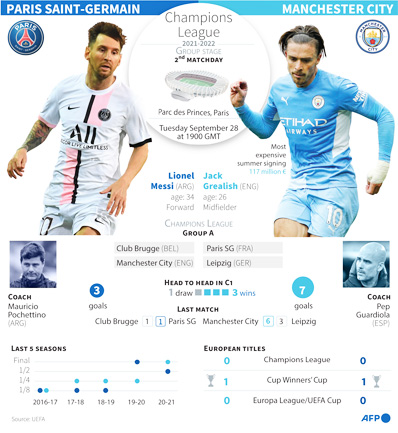 If City had anticipated Messi becoming available, they might have moved for him.

But instead they focussed their sights on Grealish and were trying to sign Harry Kane, a move that ultimately didn’t happen. “Right now it is not in our thoughts,” Guardiola said when asked if City might move for Messi.

It said much about the modern game that PSG were the only other realistic destination for the 34-year-old who Guardiola has described as the greatest player of all time.

Messi has played just three games for his new club and is yet to score.

He has sat out PSG’s last two matches with a knee problem but the feeling is that Mauricio Pochettino has been saving him for City. After being held 1-1 by Club Brugge in their opening game, PSG need a positive result against City to stop their rivals taking control of their Champions League group.

Messi will fancy opening his account in Paris on such an occasion, and Guardiola has already been on the receiving end of the Argentine’s genius in Europe.

After Guardiola left Barcelona in 2012 at the end of four glorious years in which he oversaw Messi’s transition from superstar in the making to the best in the world, he faced his old club for the first time in the Champions League semi-finals in 2015. Barcelona beat Guardiola’s Bayern 5-3 on aggregate on the way to winning the trophy.

Messi produced a sublime performance to score two late goals in a 3-0 first-leg win at the Camp Nou that effectively killed the tie. The only other time the duo have come up against each other was in the group stage in 2016, just after Guardiola arrived at City.

Messi scored a hat-trick as Barca won 4-0 at the Camp Nou and he then put his side ahead in Manchester, but City won 3-1.

This time the expectation is both City and PSG will progress from their group and both men are desperate to win the Champions League again – the last of Messi’s four titles came in 2015, while Guardiola has not lifted the trophy since Messi inspired Barcelona to a 3-1 win over Manchester United in the 2011 final.

While the world waits to see how Messi’s move to Paris turns out, Guardiola continues to regret the absence of a prolific centre-forward as the final piece of his jigsaw at City.

That was evident on Saturday when, for all their chances, they were restricted to a single goal by Gabriel Jesus in a 1-0 win at Chelsea. Prior to that Guardiola had spoken of his regret at City’s lack of a ‘weapon’ up front.

“The club needs in the next years a striker. When it’s not possible, it’s not possible, we move on with the fantastic squad we have,” he said. PSG, of course, have more than one such player. Kylian Mbappe has been the top scorer in France in each of the last three seasons.

Messi left Barcelona as their all-time top scorer with 672 goals in 778 appearances.

His peak at the Camp Nou came in Guardiola’s final season there, in 2011-12, when he scored an incredible 73 goals. Nobody knows Messi’s game better than Guardiola, but nobody knows better than Pep that there is no stopping Messi when he is at the top of his game.