SAN FRANCISCO (AFP) – Being shot in both eyes and completely blinded didn’t stop Zion Ricks-Gaines from skateboarding. It made him want to do it even more.

“I still want to go pro, I still want to accomplish being a professional skateboarder,” the 19-year-old said as he readied a kickflip at a skatepark in San Francisco.

“I want to start more skate after-school programmes for students. I feel like I wouldn’t have really looked in that direction if I had my sight.”

Zion’s life was derailed late last year when a man began shooting at him and his friends as they made their way home.

He was hit twice. One bullet destroyed his right eye; the other smashed the socket around his left, puncturing the eyeball and leaving it deflated and withered.

Days are now lived in darkness (“It’s like night-sky purple… with no stars.”) There was a long stretch in the hospital and he was fitted for a prosthetic eye. 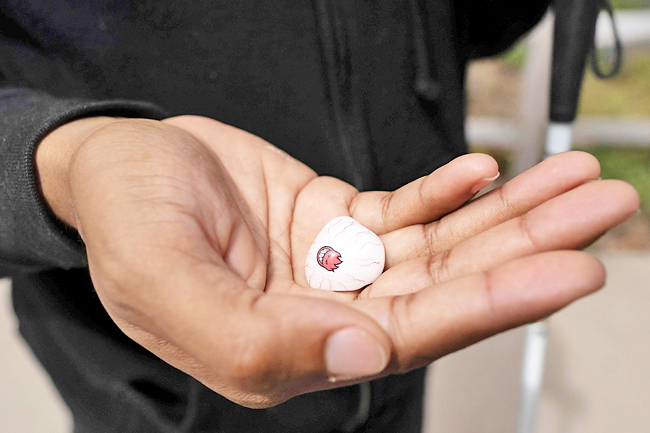 Not content with a regular iris and pupil, he opted instead for an eye with the logo of his favourite skate brand, Spitfire, a grinning head of flames. He pops the prosthetic in and out of his socket on demand.

Soon he was back out at the skatepark, doing what he had been doing since he was 12. “When I hopped on my skateboard, I felt like I had something to connect to my old life,” he said. “I felt a weight off my shoulders.”

Anyone who has spent time at a skatepark will have marvelled at the feats of balance and daring on display. Skaters race over ramps, hurling themselves several feet in the air as their board twists and pivots at their feet, before correcting itself to land right side up.

Metal rails offer six feet of boardsliding glory – or rib-shattering pain if it all goes wrong.

It’s tricky, even in ideal circumstances, but harder if you can’t see the banks, ledges and curbs you are attempting, or even the board you are riding.

“When I approach a new obstacle, I usually feel it out with my cane, or ask friends what they see, how it’s set up, what should I try to look out for. And I just work my way up and find what I’m most comfortable with.”

It helps that with seven years of skating, a lot of what his body needs to do is muscle memory, he said.

“If I want to land a trick, I know I can do it by committing and not being scared to fall.”

Though fall he does.

“All the time,” he laughed. “But that’s just a part of it. I fall now more than I used to, but it’s not from skating. I’ll try to skate a ledge, the grind won’t work and then I’ll pick my board up and start walking, and walk into the ledge and fall.”

Fellow skaters – who spray-painted a ramp with his name the day after he was shot – happily guide Zion through the park.

Dexter Lotz said Zion has become an even better version of himself.

“He seems like he got a second chance and he really needs to use it… he seems like he wants to share that with everybody around him. It’s obviously unfortunate what happened, but what he’s doing is beautiful.”

With a criminal case against his alleged attacker under way, Zion showed no signs of bitterness towards the man who took his sight, focussing his anger instead on the gun violence that blights America.

“I personally believe we don’t need guns,” he said. “I feel like we would be a way better society if we learn to do jiujitsu or any style of fighting and handled it that way and put the guns down.”

Zion said one day he wants to have children, and to be able to tell them his experience. But what he’s never going to be negative.

“I could sit at home and just be sad because I have no vision, but that’s not gonna do any good, you know? I just appreciate everything I’ve got. Ninety per cent of what you have is how you respond to it.

“I feel like I really am so blessed to just be where I’m at in life.”