AFP – Grey hair don’t care! Once regarded with disdain or something to be suppressed at any cost, grey hair was once synonymous with lack of care or the simple fact of ageing but it’s now a symbol of authenticity and self-assertion.

The phenomenon began during the pandemic and continues to be boosted by a host of celebrities who no longer hesitate to show off their natural appearance, freed from some of the unwritten rules of appearances that they endured for decades.

Who could forget the panic caused by the closure of hair salons during the first lockdowns of 2020.

The luckiest among us, who had just been for an appointment, maybe had four weeks or five weeks before seeing those dreaded grey roots, the bane of a society plagued by the slightest outward sign of old age.

Some pulled them out – but for that approach you’d need less than a handful – while others jumped on the first home colour that came along. Then there were those who decided not only to not cover them but to accept their grey hair as part of them.

After all, wasn’t it the perfect time to ignore certain beauty rules?

Two years later, grey hair has gone from being a beauty enemy to being a true beauty ally, to the point where a growing number of world-famous celebrities sporting this hair shade on red carpets and television shows. 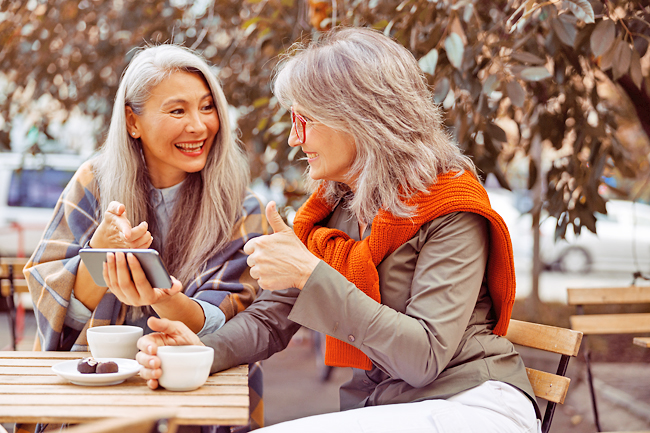 In July 2021, Andie MacDowell, a L’Oréal Paris spokeswoman, caused a sensation at the Cannes Film Festival, wearing a spectacular cascade of gray curls for the famous walk up the steps.

What should have been a non-event turned into a phenomenon, making the headlines of many women’s magazines.

The reason was that just a handful of female celebrities, with a few exceptions, had previously “dared” to show off their salt-and-pepper locks on a red carpet where so much media attention is focussed.

Someone always has to set a precedent, be an example to follow for others to identify with, and the American actress and model hit the bull’s eye.

Slowly, but surely, grey hair has begun to occupy a place within a society that gives little space or attention to women as they age.

But the image of the 50-something woman keeps evolving over the years – keep in mind grey hair can appear naturally at any age, although on average it starts at around 30 – no longer limited to that of a mother doing the ironing, but now portrayed on television and in the media as an energetic, professional, active, stylish, and even ultra attractive woman.

Something that Halle Berry, who isn’t shy about showing off her grey locks, has amply proved these last weeks on her Instagram account.

And she’s not the only one. The number of such sightings is increasing rapidly.

An increasing number of public figures, from Sarah Jessica Parker to Jane Fonda, Gwyneth Paltrow and Jodie Foster, among others, are embracing their grey hair. And we can’t forget American supermodel Kristen McMenamy who, in December 2021, was elected model of the year, showing off spectacular white hair.

Now considered attractive and desirable, gray hair is even a hot shade among younger generations who transform their brown, blond, red or chestnut hair into silvery tones that undoubtedly make a statement.

Just look at the hashtag #grayhair, which has generated no less than 470 million views on TikTok, while its cousin #grayhairdontcare has already racked up nearly 140 million.

The phenomenon seems to still be on the rise, and judging by hair colour shades in vogue for the fall like “grey oyster”, it doesn’t seem set to slow down anytime soon.

Once criticised as a beauty faux pas, grey hair is now getting its well-deserved revenge.