A report from the International Union for Conservation of Nature (IUCN) examined the close interplay between the environment and armed conflict, warning that human violence and unrest were taking a devastating toll on nature.

The report stressed that sustainable management of natural resources should be seen as a tool to help preserve peace.

“Degradation of nature increases the likelihood of conflict, while wars devastate not only lives, but also the natural environment,” IUCN Director General Bruno Oberle said in
a statement.

The report found that armed conflicts were particularly prevalent in some of the world’s more bio-diverse regions.

IUCN said 219 endangered species were facing threats from “war, civil unrest and military exercises”, including the direct killing of wildlife, degradation of ecosystems and the disruption of conservation efforts. 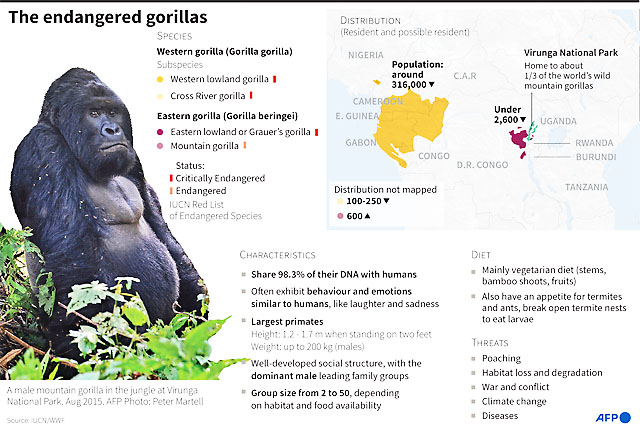 While this is only a fraction of the more than 30,000 animal and plant species listed as threatened on IUCN’s Red List, the report stressed it included “iconic species”.

Among them is the critically endangered Eastern gorilla, found in conflict-prone Democratic Republic of Congo, Rwanda and Uganda.

One of the threats to the world’s largest living primate, according to IUCN Chief Scientist Thomas Brooks, is “direct killing, sometimes for target practice, sometimes for food”.

But the bigger threat conflicts posed to the species, he told AFP, was the “undermining of conservation efforts”.

The report pointed to the dramatic impact on a range of species from conflicts.

During the 1994 war in Rwanda for instance, 90 per cent of the large mammals in the Akagara National Park were killed for food or trade, it said, with the genocide sending thousands of people fleeing through protected areas, killing animals for food and clearing trees along the way.

It also highlighted a report by the United Nations Office on Drugs and Crime indicating that militia from Sudan were responsible for the deaths of some 2,000 elephants in the Central African Republic in 2007 alone.

The report also said the Vietnam War “almost certainly accelerated the slide into extinction” of the Javan rhinoceros, as the Viet Cong shot them to supplement a meagre diet.

“There is no question that conflict does have increased species extinction risk,”
Brooks said.

At the same time, the report found that degradation of nature was associated with increased risk of conflict.

Looking at more than 85,000 armed conflict events over the past 30 years, which have been responsible for the deaths of more than two million people, the report determined they were more likely to erupt where there is less productive agricultural land available and when droughts are frequent.

“These findings suggest that conservation, restoration and sustainable management of natural resources can help reduce the pressures that drive conflict by improving the condition and productivity of the landscape,” IUCN chief economist Juha Siikamaki said in the statement.

Today, there are more than 7,000 such events each year, mainly in sub-Saharan Africa and in West and South Asia.

“As environmental degradation and climate change intensify, it is becoming increasingly important to factor in the links between conflict and nature when formulating security, development and environmental policy,” Siikamaki said.

The report meanwhile found that conflicts were less frequent within the boundaries of natural reserves and other protected areas.

Such areas cover an estimated 15 per cent of land, but overlap with only three per cent of the armed conflict events analysed by the report.

“Conservation, sustainable and equitable management of nature plays an important role in preventing conflict and in rebuilding peace,” said Kristen Walker, who chairs the IUCN commission on environmental, economic and social policy.

“It supports livelihoods and well-being of indigenous and local communities in times of peace and helps reduce the risk of conflicts breaking out,” she added.

The report listed policy recommendations to mitigate and prevent armed conflict, including establishing safeguards for staff in protected areas, environmental defenders and other conservationists.

It also called for “sanctions against those who commit environmental war crimes”.