UTHAI SAWAN, THAILAND (AP) – The little girl’s nickname was Plai Fon. In Thai, it means “the end of the rainy season” – a time of happiness.

And then in one horrible burst of violence, the happiness that the chubby-cheeked four-year-old had symbolised for her adoring family was shattered. In its place is an unfathomable agony over what happened to Plai Fon in a massacre that began at her Thai day care centre and left 36 people, plus the killer, dead.

“When she woke up, she would say, ‘I love you, mummy and daddy and brother,’” her mother, Tukta Wongsila, recalled of her daughter’s usual morning routine. Tukta’s grief over the memory soon stole her breath away.

At least 24 of the victims of Thursday’s gun and knife attack in northeast Thailand were children, mostly pre-schoolers. One day after their short lives were snuffed out, their desperate families spent hours outside an administrative office near the day care centre, waiting for their children’s bodies to be released.

Authorities had told the families to gather at the office so they could process compensation claims and meet the prime minister. But Tukta didn’t care about forms or formalities. She just wanted her little girl. 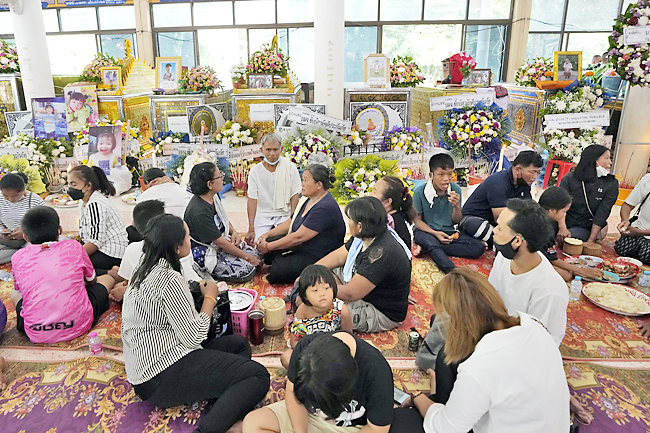 “I want to get my daughter back to hold a ceremony as soon as I can,” she wailed, tears pouring from her red eyes. “All this insurance money, I don’t want it. I just want her back for the funeral.”

Tukta and her family live in Uthai Sawan, a rural community in one of the country’s poorest regions, not far from the Laos border. Like many residents, they have long struggled to pay the bills.

Tukta and her husband work on the family’s rice farm during the growing season, making around USD2,600 a year if they are lucky. They take odd jobs on their free days to bolster their income.

The couple and their children share a house with Tukta’s mother-in-law and bed-ridden father-in-law. Moving to a bigger city for better jobs has been impossible because of their need to care for their young children and aging parents.

Plai Fon, whose formal name was Siriprapa Prasertsuk, was the eldest of Tukta’s two children, three years older than her baby brother. She was tiny, with black hair and plump cheeks that pulled up into a radiant smile. It was a smile her grandmother, 62-year-old Bandal Pornsora, already missed.

On Thursday, Plai Fon went to the Young Children’s Development Centre, where the walls are adorned with cheerful pictures of flowers and butterflies. It was early afternoon when a fired police officer stormed in and began shooting and stabbing the children, who had been snuggled up on mats and blankets taking their afternoon nap.

On Friday, as Tukta waited for her daughter’s body, she found herself contemplating the horror Plai Fon must have endured in her final moments.

“I want to see my daughter, to see what she looked like,” she said. “I don’t know how much pain he inflicted on her. (Even) if she was asleep, she must have felt the pain. I don’t know what took her life. I just want to see her face.”

She finally would, hours later, at a nearby temple where loved ones of the dead had gathered to receive the bodies. Families who emerged from the temple spoke of seeing massive cuts on their children. Many screamed. Some fainted. Tukta walked into the temple alongside her husband and mother-in-law. When they came back out, Tukta’s husband collapsed. He was taken to the hospital.

Tukta sobbed and reached for her father’s arms. Plai Fon’s eyes, she said, had been wide open.

On the lawn behind the temple, the pair embraced, trying to provide comfort that would not come.

Tukta clung to a framed photo of Plai Fon drawing with a yellow marker and staring into the camera with wide, dark eyes. The young mother’s fingers fidgeted on the edge of the frame as she leaned into her father, both wiping away tears.

Every night before bed, Tukta said, Plai Fon would say: “I want to sleep with mummy.”

Tukta wept at the memory.

“These are the words I hear every night,” she said. “But I missed those words last night.”