1LOS ANGELES (AFP) – The Golden Globes – long known as Hollywood’s favourite party, but rocked by recent scandals – will attempt to stage a celebrity-filled comeback tomorrow, as films from Steven Spielberg’s The Fabelmans to Top Gun and Avatar sequels compete for top honours.

The Globes traditionally play a key role in kick-starting the movie awards season, but were taken off air last year amid controversy over ethical lapses and a lack of diversity in the Hollywood Foreign Press Association (HFPA), which organises the Beverly Hills gala.

This year, following efforts to reform the HFPA – which previously had no Black members – NBC will broadcast the 80th Golden Globe Awards on a one-off basis, and invitations have been dispatched to Tinseltown’s brightest stars.

A-listers expected in the ballroom at the Beverly Hilton include Spielberg, whose semi-autobiographical film is the favourite to win best drama, and Eddie Murphy, who will receive a career achievement award.

Comedian Jerrod Carmichael will host the ceremony, and Quentin Tarantino is among the night’s presenters. 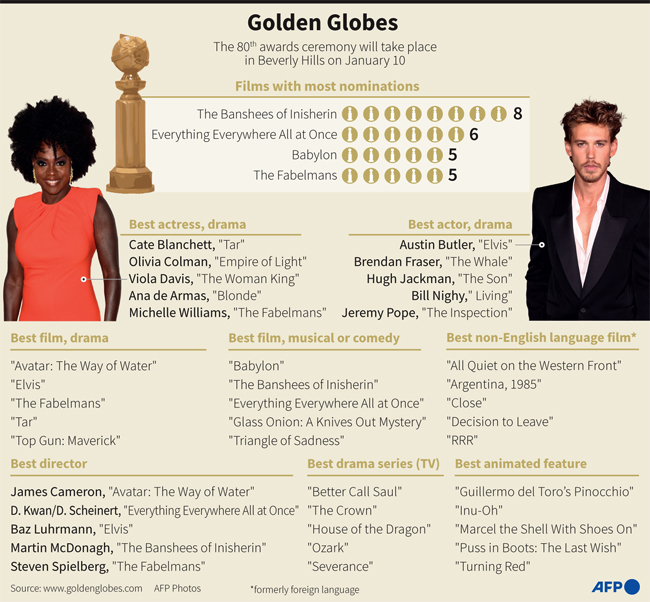 But many top nominees have not yet confirmed their attendance, and Deadline awards columnist Pete Hammond expects this year’s Globes to be “different” from the glitzy bashes seen before Covid and industry boycotts interrupted the merrymaking.

“They are going to be muted. There’s no after-parties to go to. There’s none of that. They’re not spending big bucks, the studios, on all of this,” Hammond told AFP.

Those who walk the red carpet will be peppered with questions from journalists like “Do you feel comfortable being here?” and “Are you satisfied they’ve made all the changes?” he predicted.

“It’s not going to be exclusively ‘What are you wearing?’”

Unlike the Oscars, the Golden Globes movie awards are split between “drama” and “comedy or musical” categories.

On the drama side, The Fabelmans is up against last year’s two biggest box office hits – the blockbuster sequel Top Gun: Maverick starring Tom Cruise, and James Cameron’s Avatar: The Way of Water.

But The Whale nominee Brendan Fraser, who alleges he was sexually assaulted by a former HFPA president, ruled out attending tomorrow’s gala.

Cruise, a producer on Top Gun: Maverick, is also unlikely to attend, after he returned his three Globes to the HFPA in 2021 in protest at its behaviour.

The Banshees of Inisherin holds the most overall nominations at this year’s Globes, with eight, and is a favourite to win best comedy, as well as best comedy actor for Colin Farrell.

The movie about a shattered friendship on a remote Irish island will contend with surreal, multiverse-hopping sci-fi film Everything Everywhere All At Once, which is seeking acting prizes for Michelle Yeoh, Jamie Lee Curtis and Ke Huy Quan.

In years past, success at the Globes was a potential bellwether for films hoping to win Oscars, and served as a valuable marketing tool.

But recent controversies have muddied the waters.

The addition of over 100 new, more racially diverse Globes voters, who are not full HFPA members, made it even harder to predict who the enigmatic group of foreign journalists will reward.

While movie billboards and commercials boasting of Globes nominations have returned after last year’s notable absence, few nominees have publicly thanked the HFPA.

According to Hammond, some in the industry privately yearn for the old Globes to return because the show is an important “cog in the wheel of awards season” which has “been around Hollywood for 80 years”.

“You can’t buy tradition,” he said.

But rows over diversity, alleged corruption and lack of professionalism “lessened” the Globes’ sheen when it comes to influencing the Oscars, Hammond said.

“When every (Globes) story talks about the scandal… it doesn’t make it as credible, I think, to the Oscar voters,” he said.