Tug of war is not a new sport in Brunei Darussalam. It is identified as a traditional sport that has long been embedded in the hearts and souls of sports enthusiasts.

The sport is seen as a cultural symbol and an efficient channel in bringing society together, as well as fostering physical and mental resilience of its practitioners.

As a sport passed down from generations, tug of war is going strong, especially as it attracts the younger generation to pick it up as a hobby.

Those witnessing the sport are also entertained with the participants’ action demonstrating a combination of physical strength and mental endurance to strive for success.

The sport is typically played by eight pullers from each team with one reserve. 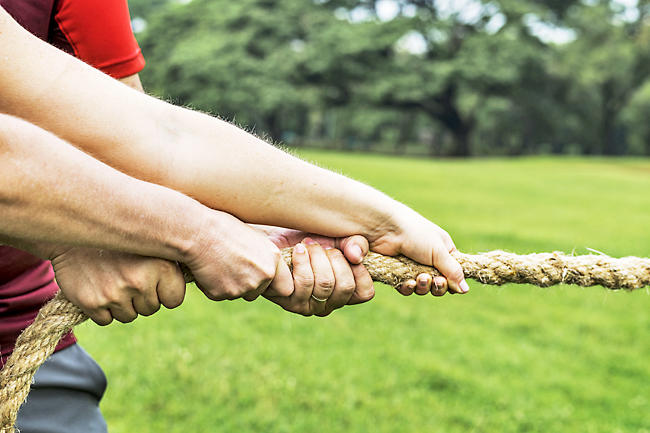 A puller should have very high morale, possess a never-say-die attitude, good discipline, accept criticism with an open mind and good stamina.

An established local team is ChainBlock, which has enjoyed a series of accomplishments at national level since establishment.

ChainBlock Tug of War Team Deputy President Hussin bin Haji Yahya said ChainBlock was established in 2000 when he was 21-years-old.

The team was formerly known as SILA 9000 before it was changed to ChainBlock in 2007 with 200 members from Limbang, Sarawak and Marudu, Sabah.

The team is planning to enhance training in terms of stamina, technique and energy of individuals and as a group.

Hussin, who is also the national head coach, said, “We will consult with the ChainBlock committee members to organise friendly tug of war training this year.”

The team has been victorious for five consecutive years in the national level tug of war competition held in conjunction with His Majesty Sultan Haji Hassanal Bolkiah Mu’izzaddin Waddaulah ibni Al-Marhum Sultan Haji Omar ‘Ali Saifuddien Sa’adul Khairi Waddien, Sultan and Yang Di-Pertuan of Brunei Darussalam’ birthday celebrations. The team’s successes include the under-19 categories for 560kg and 680kg in 2019.

Other accomplishments include winning a tournament organised by Fire Bravo and KB Bull in 2018, being champion and runners-up of a tournament organised by Highlander in the same year, being listed in the top six of an international open competition in Kuala Lumpur in 2019, coming third in the Limbang International Open in 2019 and emerging as champion in the Malaysian High Commission friendly match in September 2020.

In Brunei Darussalam, the tug of war teams are KB Bull Brothers from the Belait District, Combined Brunei Tribe team in the Tutong District, MG 5 and Temburong Youths from the Temburong District and MB Athlete, HSN & Fitness, New Anak Brunei, SPSS Company from the Brunei-Muara District preserving the traditional sport.

Hussin hopes that tug of war will provide exposure and opportunities to students from higher learning institutions, colleges and schools to develop talent, ability and dexterity in the sport.

Meanwhile, at the international level, Brunei Darussalam finished third in the 1st ASEAN-level of the 14th Asian Tug-of-War Indoor Championships in Ayuthaya, Thailand in September 2019.

In August the same year, the country, represented by EWC Tug-of-War Team, recorded a third place finish in the International Indoor Clubs Tug-of-War Championship in Putrajaya.