DENVER (AP) – When Kevin Erickson fires up his 1972 Plymouth Satellite, a faint hum replaces what is normally the sound of pistons pumping, gas coursing through the carburetor and the low thrum of the exhaust.

Erickson is among a small but expanding group of tinkerers, racers, engineers and entrepreneurs across the country who are converting vintage cars and trucks into greener, and often much faster, electric vehicles (EVs).

Despite derision from some purists about the converted cars resembling golf carts or remote-controlled (RC) cars, electric powertrain conversions are becoming more mainstream as battery technology advances and the world turns toward cleaner energy to combat climate change.

“RC cars are fast, so that’s kind of a compliment really,” said Erickson, whose renamed “Electrollite” accelerates to 0-97 kilometres per hour (kph) in three seconds and tops out at about 249kph. It also invites curious stares at public charging stations, which are becoming increasingly common across the country.

At the end of 2019, Erickson, a cargo pilot who lives in suburban Denver, bought the car for USD6,500. He then embarked on a year-and-a-half-long project to convert the car into a 636-horsepower electric vehicle, using battery packs, a motor and the entire rear subframe from a crashed Tesla Model S. 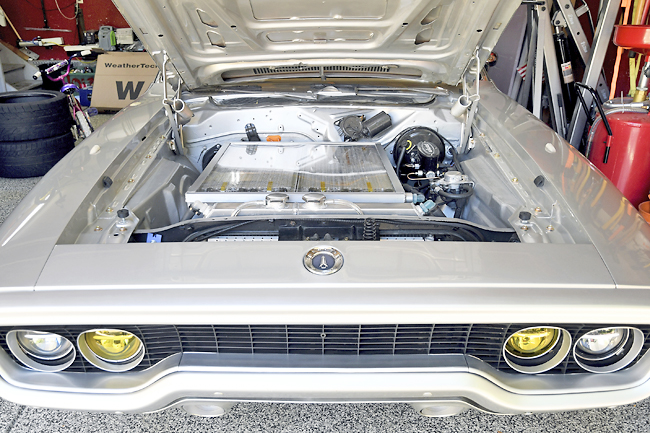 “This was my way of taking the car that I like – my favourite body – and then taking the modern technology and performance, and mixing them together,” said Erickson, who has put about USD60,000 into the project.

Vice President of Car Culture Jonathan Klinger for Hagerty, an insurance company and automotive lifestyle brand that specialises in collector vehicles, said converting classic cars into EVs is “definitely a trend,” although research on the practice is limited.

In May, the Michigan-based company conducted a web-based survey of about 25,000 self-identified automobile enthusiasts in the United States (US), Canada and the United Kingdom (UK). About one per cent had either partially or fully converted their classic to run on some sort of electrified drivetrain.

The respondents’ top three reasons for converting their vehicles were for faster acceleration and improved performance, for a fun and challenging project, and because of environmental and emissions concerns. About 25 per cent of respondents said they approve of classic vehicles being partially or fully converted to EVs.

“Electric vehicles deliver some pretty astonishing performance just by the nature of the mechanics of how they work,” Klinger said. So it’s not surprising to him that a small percentage of people converting classic cars to EVs are interested in improving performance. He compared the current trend to the hot-rod movement of the 1950s.

“There’s something satisfying about having a vintage car that has a carburetor,” he said, because it’s the same as when the car was new. Some enthusiasts want to preserve the sound and rumble of older cars’ original engines.

Other barriers to converting cars include the knowledge it takes to delve into such a complicated project, as well as safety concerns about tinkering with high-voltage components, the availability of parts, and the time it takes to realise a positive, environmental impact. Because classic vehicles are driven for fewer than 2,414 kilometres a year on average, it takes longer to offset the initial carbon footprint of manufacturing the batteries, Klinger said.

And then there’s the price.

Sean Moudry, who co-owns Inspire EV, a small conversion business in suburban Denver, recently modified a 1965 Ford Mustang that was destined for the landfill. The year-and-a-half-long project cost more than USD100,000 and revealed several other obstacles that underscore why conversions are not “plug-and-play” endeavours.

Trying to pack enough power into the pony car to “smoke the tires off of it” at a drag strip, Moudry and his partners replaced the underpowered six-cylinder gas engine with a motor from a crashed Tesla Model S. They also installed 16 Tesla battery packs weighing a total of about 363 kilogrammes.

Most classic vehicles, including the Mustang, weren’t designed to handle that much weight – or the increased performance that comes with a powerful electric motor. So the team had to beef up the car’s suspension, steering, driveshaft and brakes.

The result is a Frankenstein-like vehicle that includes a rear axle from a Ford F-150 pickup and rotors from a Dodge Durango SUV, as well as disc brakes and sturdier coil-over shocks in the front and rear.

Although Ford and General Motors have or are planning to produce standalone electric “crate” motors that are marketed to classic vehicle owners, Moudry says it’s still not realistic for a casual car tinkerer to have the resources to take on such a complicated project. Because of this, he thinks it will take a while for EV conversions to become mainstream.

But that reality could be coming sooner than expected, according to President and CEO Mike Spagnola of the Specialty Equipment Market Association, a trade group that focuses on aftermarket vehicle parts.

He said that during SEMA’s annual show in Las Vegas this fall, some 1,951 square metres of convention space was dedicated to electric vehicles and their parts. That was up from only 232 square metres at the 2021 show.

Companies are developing universal parts, as well as lighter, smaller and more powerful battery packs. They’re also creating wiring components that are easier to install and myriad other innovations. Some are even building vehicle frames with the electric motor, batteries and components already installed. Buyers can just install the body of a classic vehicle on top of the platform.

“The early adopters of this would take a crashed Tesla and pull the motor and harnesses and batteries and all that out of the vehicle and find a way to shoehorn it into whatever vehicle they wanted to build,” Spagnola said. “But today there are many manufacturers now starting to make components… We’re really excited about it.”