Global stocks decline ahead of US inflation update

BEIJING (AP) – Global stock markets fell on Thursday ahead of a United States (US) inflation update that will likely influence Federal Reserve plans for more interest rate hikes as investors waited to see who will control Congress after this week’s elections.

London, Shanghai, Frankfurt and Tokyo declined. US futures were higher. The euro fell back below USD1.

Wall Street’s benchmark S&P 500 index tumbled on Wednesday as votes were counted to decide whether Republicans take control of Congress, possibly leading to changes that can unsettle markets. Investors were rattled by the crypto industry’s latest crisis of confidence and weaker profit reports from The Walt Disney Co and some other companies.

Forecasters expect US government data to show inflation eased in September but stayed near a four-decade high. That might reinforce arguments that rates have to stay elevated for an extended period to slow economic activity and extinguish inflation.

“An upside surprise today would present a challenge for officials who expect to slow the pace of rate hikes,” Rubeela Farooqi of High-Frequency Economics said in a report. 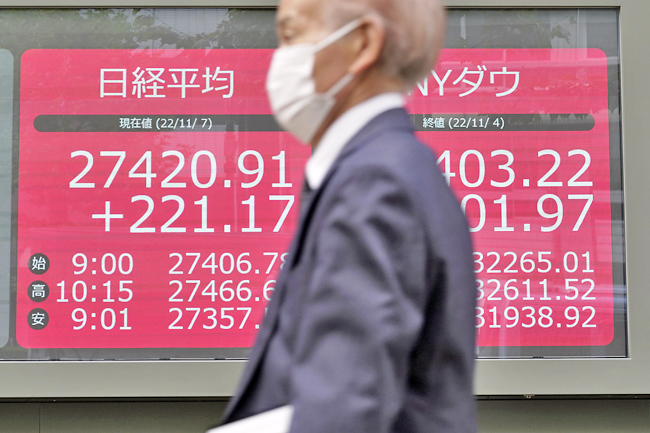 On Wall Street, futures for the S&P 500 and the Dow Jones Industrial Average were up 0.3 per cent.

On Wednesday, the S&P 500 lost 2.1 per cent, erasing gains from a three-day rally leading up to Election Day.

Disney sank 13.2 per cent for the largest loss in the S&P 500 after reporting quarterly results that fell short of analysts’ expectations.

The Dow fell two per cent and the Nasdaq composite, dominated by tech companies, tumbled 2.5 per cent.

Facebook parent Meta Platforms rose 5.2 per cent after saying it will cut costs by laying off 11,000 employees, or about 13 per cent of its workforce. It is down nearly 70 per cent for the year.