The Ministry of Energy yesterday led over 20 Legislative Council (LegCo) members on a tour of various energy facilities in the Belait District, to help provide strategic insights into the latest developments made in the energy sector in the nation.

The visit to three key energy sites in the district highlighted the sector’s crucial role as a cornerstone of Brunei’s socio-economic development.

Commissioned back in 2010, TSB was developed as part of a joint collaboration between Japan and the Brunei government. With the site being operated by the Department of Electrical Services (DES) under the Ministry of Energy, the plant contributes about 0.14 per cent of the country’s total power generation capacity through solar energy.

As the first solar power plant in the country, TSB is a testimony of Brunei Darussalam’s commitment to further advance the deployment and development of renewable energy technologies in the nation. 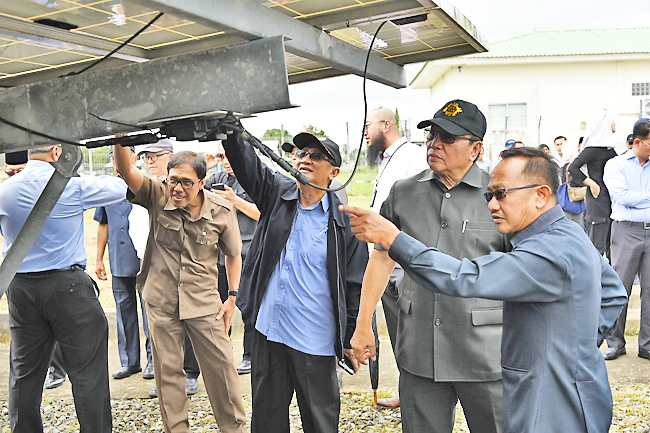 The visit provided the delegation an insight on the importance of renewable energy sources for the nation, as it aims towards diversification of energy supply, while making efforts in the preservation of the environment.

Head of TSB Haji Yusri bin Haji Mohd Ali briefed the delegation on the daily operations at the plant. They were also given a first-hand look at the solar panels and facilities which help to generate the electricity that feeds into the local grid network.

The next site was the Head Office of Brunei Shell Petroleum Company Sdn Bhd (BSP), where the LegCo members were presented with an overview of BSP’s business and operations, including its past achievements and future business plans.

The delegation was welcomed by Managing Director Agnete Johnsgaard-Lewis, while Commercial Director of BSP Haji Azmi bin Haji Mohd Hanifah presented presentation on the commitments made by BSP towards its In-Country Value (ICV).

The presentation also covered BSP’s 90-year history, during which it has continued to produce safely, reliably and responsibly in support of Brunei Vision 2035.

As the country’s largest oil and gas company, BSP also highlighted its efforts towards actively increasing its portfolio through active exploration including onshore and offshore drilling activities, with one such effort made in 2020, where BSP expanded its offshore exploration activities by embarking on its first Deepwater projects.

LegCo members engaged in a discussion, expressing concerns and issues during a dialogue session. They later toured the New Data Centre and Offices (NDCO) building, where they were briefed on the building’s state-of-the-art data centre.

A notable achievement shared during the tour was the CerDaaS project, where BSP has partnered with a leading global independent end-to-end IT services company to setup a local end-user computing (EUC) service operations that aims to further boost BSP’s connectivity.

Through this flagship project, up to 50 local IT experts were employed under the IT services company, whom the delegates were able meet and learn more about the technologies being utilised by BSP.

After lunch at the Brunei Shell Recreation Club (BSRC), during which the LegCo members exchanged views on local employment and business opportunities in the energy sector with Bruneian oil and gas industry leaders, the delegation was taken on a visit of the Brunei Fertilizer Industries (BFI) site at the Sungai Liang Industrial Park (SPARK).

With the BFI’s main site undergoing construction, the presentation was conducted at the mini theatre of the SPARK Administration Building, where delegates were briefed on the BFI’s background, along with the status of the construction and how it will contribute to the local economy.

The plant is one of the two large downstream oil and gas projects in the nation, alongside PMB Refinery and Petrochemical Plant at Pulau Muara Besar. Once the former is completed, the BFI plant is projected to be among the largest fertiliser plants in Southeast Asia, estimated to be capable of producing 2,200 metric tonnes of ammonia and 3,900 metric tonnes of urea per day. BFI is targetting 548 direct employment opportunities during its first year of operation, of which 65 per cent of the workforce will be local.

The BFI project will also present opportunities for local contractors and micro, small and medium enterprises (MSMEs) through the provision of support services in the area of construction, maintenance, transport, logistics, catering and accommodation.

In addition, the site visits also featured projects that contribute towards the Ministry of Energy’s vision towards ‘Diverse and sustainable economy led by Bruneians for the prosperity of the nations.’