After playing with sugar gliders for a few days, watching them nibble on treats, climbing up to high surfaces and gliding around a room, Nur Liyana Amalina binti Suhili became enamoured with the tiny hyperactive furballs and decided to keep them as pets.

In an interview with the Bulletin, Liyana shared that she first laid eyes on sugar gliders back in 2015 when her younger cousins from next door showed her the small, omnivorous, arboreal, and nocturnal gliding possums belonging to the marsupial infraclass.

She found the sugar gliders to be cute and cuddly, and especially loved their big black eyes. She also found them playful and being small they could easily fit into the palms and be carried around in a pouch, bag or pocket, which according to her is also a good way to initiate a bond and let them get familiar with the owner’s scent.

It took her some time before deciding to keep them as pets as she knew very little about them.

Then, there is the fact that exotic pets are not easy to care for, with their special diet, social and living requirements, as well as the cost.

“I poured hours into research, reached out to other owners, followed online communities and joined a local group of sugar glider enthusiasts. 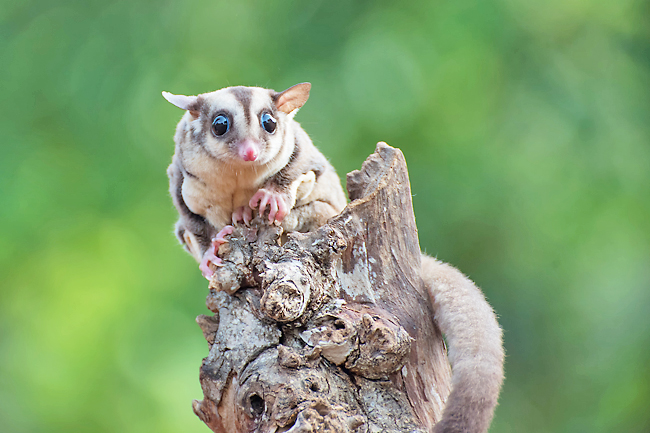 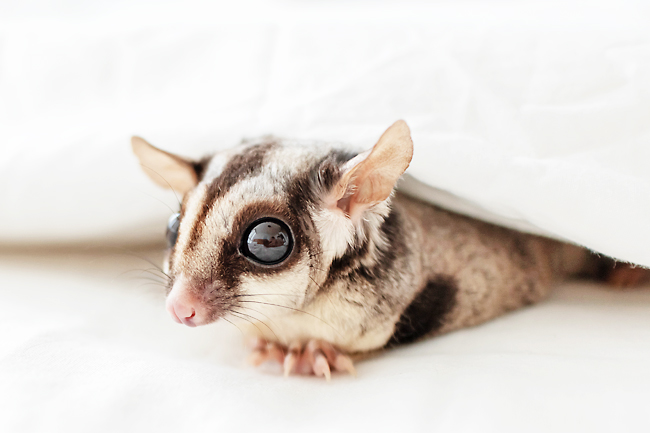 “Within a few months, I bought my first pair of sugar gliders. Six years later, I am still a proud parent of a small colony of attention-seeking rascals,” said Liyana.

She noted that the animals are nocturnal, territorial, and very social. From her research, she learnt that sugar gliders live in large colonies of 10 or more in the wild and are best kept in pairs at home at minimum; a lone glider is prone to depression, which could lead to illnesses and behavioural problems including self-mutilation.

“Sugar gliders get strongly attached to their owners, hence keeping them is a long-term commitment,” said Liyana, adding that this is something to think about considerably as their average life span is between 10 to 12 years.

Although some would assume the gliders are rodents, they actually belong to the marsupial family and are more closely related to koala bears than squirrels.

Just like a kangaroo, a female glider has a pouch on its belly to raise its babies, called joeys, and a male glider on the other hand has a bald spot on its forehead that is actually a scent gland, rubbing it on its mate, offspring and home when marking its territory.

As for how the gliders get their name, Liyana explained that it’s their love for sweet or sugary food like fruits, nectar and honey. However they are omnivores, which means they need a variety of plants and protein with additional supplements to ensure a nutritionally
balanced diet.

Liyana said one of the very effective and fun bonding methods is by giving treats, with her gliders having particular love for mealworms.

Sugar gliders are also very vocal animals and have four primary sounds – barking, hissing, chirping and the most dreaded sound of crabbing, which sounds like locusts going up and down in pitch.

And it is because of this sound alone that Liyana does not recommend keeping the gliders in the bedroom or any place that requires peace and quiet.

Her gliders are kept in a spare room, away from distractions and foot traffic as they can also get distressed easily.

Another good spot is an outdoor enclosure provided there is enough protection from the heat of the sun, rain and potential predators.

Since the cost of setting up a proper habitat is high enough as it is, she decided to build her own cage, which was a fun DIY project and saved her a few hundred dollars compared to buying a similar-sized ready-made cage. Liyana said that the cage should be as large as possible and the taller the better, as the gliders love to jump and climb.

Taming the gliders takes patience, love and understanding. Liyana highlighted that no two gliders are the same, as some might bond with you instantly while others take days, weeks or even months.

They will also bite and crab when they get upset, angry or frightened.

So one might get a good number of bites before fully bonding; but once you earn their trust, they can be the sweetest and most wonderful pets, she assured.

Meanwhile, Liyana’s sugar glider has given birth to cute and adorable joeys. “From my experience, gliders are easier to tame when they are younger, as they get to grow accustomed to being around people from an early age. I would start out with holding the babies for a few minutes, in front of the mother (so as not to lose her trust), every day and gradually increase the amount of time I spend with them until they are fully tame,” she said.

“When it comes to pregnancy, there is nothing much to worry about besides feeding the mother with extra servings. Sugar gliders are also excellent parents with very protective instincts, and it is best to just leave them be until the joeys are old enough to be handled. The parents would take turns watching over the joeys while the other goes out to feed.

“One of the most mind-blowing moments for me was when I witnessed my first-born glider, Momo, watching over its newborn brother in the nesting pouch while the parents were out ‘stretching their legs’. That level of solidarity felt magical,” she said

Sugar gliders give birth to newborns every three months or so. When a joey is born, it is largely undeveloped, and the mother will lick a trail for the joey to crawl up with only its sense of smell to guide it into the mother’s pouch. It is also hard to tell when a female has a bun in its oven, not until a lot later when the belly has a noticeably large bulge.

Liyana noted that there is a limited supply of food and essentials such as large cages and exercise wheels suited to sugar gliders, all owing to the fact that sugar gliders are not a common pet choice in the community.

At most, what is found in local pet stores are pricey treats such as dried mealworms and fish sticks, wooden nests for rodents and rope toys for birds. The lack of exotic pet veterinarians or clinics that specialise in exotic pet care is another concern for her as there is nowhere to get her fur babies vaccinated, neutered or scheduled for checkups.

The Internet is thus far her only source of information to guide her through any sickness.

Recently, one of her gliders died out of the blue while the rest of the colony was fine with none looking sick or injured.

She had fed them food and water from the same sources, she felt helpless for being unable to do anything or figure out why it had happened.

She did note however that there are affordable options offered by online sellers and trusted sites. There are also DIY alternatives to minimise cost and monthly budget as well as local owners who can offer sound advices.

“Despite the extra hassle, my gliders are a worthy investment. Just seeing a little tail popping out of my glider’s belly sparks joy in me.”

Gliders tend to get bored easily. They are also quite smart and her gliders know their names and will come when called. With enough training, they can even do tricks such as gliding from a high point to your hand upon signal, or race through an obstacle course.

“As for spending time with my sugar gliders, I interact with them for at least 10 minutes every day, or when I get really busy, at least half the day for one day of the week.”

Her husband came up with an idea to use red-tinted light bulbs so they can see the gliders at night without bothering them with too much light and also leave the cage doors open most of the time, letting them roam and glide around freely to reduce stress and encourage activeness.

Sugar gliders cannot be potty trained, so Liyana would change the bedding once a week and wash the cage and accessories at least every two weeks. They do not need to be bathed, but if they get really smelly, she uses a dry shampoo specifically for sugar gliders.

Prior to the pandemic, Liyana would stop by Miri at least once a month or make online purchases to replenish her colony food supply.

“Currently I am following the TPG diet, which involves spending as little as BND35-50 for a month’s food supply for my colony. I also regularly treat my babies to mealworms, dried fruits, and even baby snacks (with no artificial preservatives, colouring or flavouring),” she added.