Getting up close and personal

WASHINGTON (AP) – One handshake, one hug and one selfie at a time. If President Joe Biden could greet every American this way, longtime allies say, his approval ratings would soar.

Biden has never been at his best in big speeches, where his delivery can be stilted, his stories sometimes meandering. It’s the end of his speech that often marks the beginning of Biden’s favourite part of an event – the rope line, in the parlance of political operatives. He whirls around, scans the crowd and zeroes in on his first target for a one-on-one connection.

It might be with someone like Tim Eichinger who asked Biden a question during a TV town hall 20 months ago, and has since had a one-on-one videoconference with the president and seen Biden send a couple of letters to his grandson.

It might be a small child – Biden likes to carry some cash so he can discretely slip kids a few dollars and encourage them to buy ice cream. It might be someone who stutters – they come in for special attention from the president.

After Biden gave a speech on student loans on Friday at Delaware State University, there were plentiful handshakes and photos with the students on stage. Last Tuesday, at a Democratic National Committee event in Washington, Biden invited one audience member backstage for a private photo, autographed some of the abortion rights signs that participants had been waving and mugged in a handful of selfies. 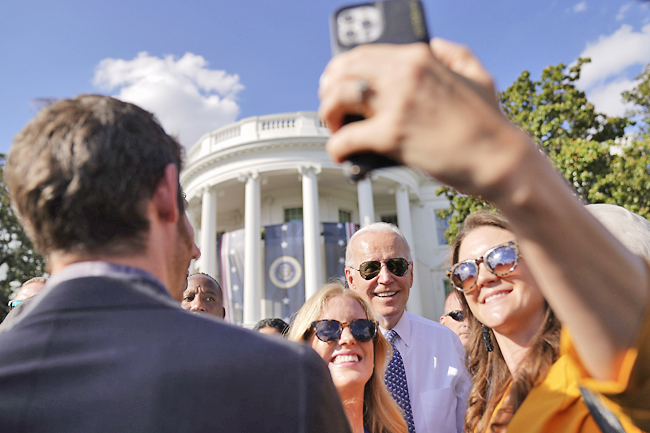 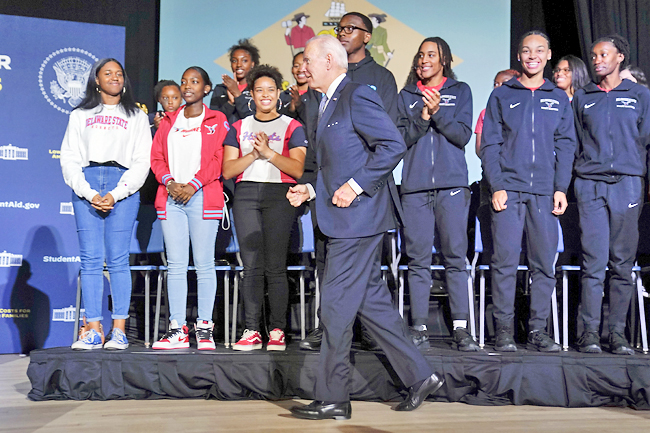 Aides say the 79-year-old has perfected his selfie arm, the products of which are widely shared on social media. At an August event for Maryland Democratic gubernatorial candidate Wes Moore, Biden spent more than 75 minutes across three different rooms greeting people after the speechmaking had ended. He drew cheers when he grabbed hold of a high school drum major’s baton and then posed with it for a photo before the marching band.

It’s all part of an approach Biden has largely perfected through decades of glad-handing in his home state of Delaware, whose population is just over one million and was about half that when Biden was first elected to the Senate in 1972.

Scaling that kind of personal politicking to the presidential level has been a challenge, first as Biden campaigned for the Oval Office in the COVID-19 pandemic that curtailed his public engagements and now that he’s in the White House, where the demands on his time – and the security – are greater.

The hard fact, politically, is that one-on-one warmth and empathy only go so far. They helped him forge bipartisan bonds in the Senate but from the White House, most voters, most of the time, only see the president in scripted or staged moments. Biden aides have sought out ways to show voters the president’s private interactions, with behind-the-scenes videos of some of the encounters, even if they are unlikely to ever have a chance at one themselves.

Still, Biden insists that time be built into his schedule so he can interact with people at his events – such encounters seem to energise him and help inform his policymaking. There can occasionally be awkward moments, too, such as when a presidential quip lands poorly, that in today’s partisan environment are often broadcast online by his political rivals.

But they are outnumbered by the positive interactions that have defined Biden’s career and tested the stamina of his aides.

“He’s going to take as much time as he wants,” added Biden’s former personal aide Stephen Goepfert, or “body man”.

The president, whose poll ratings have risen in recent months but remain in negative territory, has held relatively few large political events in the leadup to midterm elections.

Many Democratic candidates don’t see a Biden appearance as a plus. Aides say his schedule – and the size of his audiences – will pick up as his party pivots to get-out-the-vote efforts.

But don’t expect the small encounters to go away. Biden, aides said, seems to detect when someone may be going through a personal or family crisis – perhaps informed by his own experiences with grief and challenge: the death of his first wife and daughter in a car crash, the loss of his son to cancer, his recovery from a pair of life-threatening brain aneurysms, a decades-long struggle to overcome a stutter.

“He just instinctually knows how to show up for what that person needs in whatever way that is,” said O’Malley Dillon.

Goepfert followed steps behind Biden at hundreds of events during the campaign and in the White House before he left in August.

“I’ve seen him comfort people who were in tears talking about their personal hardships, console somebody who’s recently been diagnosed with cancer, honour a veteran servicemember with a handshake and one of his challenge coins, and also give a young person money for ice cream just for sitting through the speech – and all in the same rope line,” he said.

As Biden works his way through a crowd, he’ll often summon an aide to take someone backstage for a photo, collect their information for follow-up, or jot down the phone number of a loved one who couldn’t be there for a surprise call from the president.

In his armoured limousine after an event, Biden “is ready to follow up with the people he met, and he’s already making those phone calls”, said Goepfert.