Muay Thai is a martial art and combat sport with roots that can be traced to the Siam Kingdom of Thailand, all the way back to the 16th Century. As with many other sports, Muay Thai also has a following as an avenue for individuals to keep fit and to vent built up stress.

A group of Muay Thai practitioners based in Belait District aims to not only further cultivate the sport, but also to gather likeminded individuals keen on learning about it.

Seria, Wali’s Silverback Muay Thai group, having made their mark at the gym located within Pusat Insani, practises the sport as a recreation to help promote healthy living.

“I started Muay Thai when I was 17. There was a gym called ‘Bushido’ and that was the first gym in Brunei that taught Muay Thai, with a coach from Thailand,” he said. 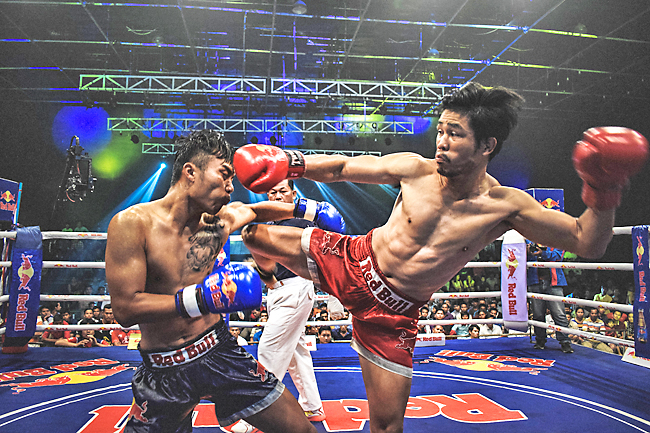 He recalled how at that time he was enthralled by the art form through movies that featured it, which spurred him on to learn the sport.

“It was not for competition. In the movies, the movements were very beautiful, and I wanted to mirror that.”

Pursuing his higher degree in Malaysia in his 20s, he continued his Muay Thai pursuit.

“While there, I found a gym that focussed on fighting competition. That is where I started my amateur fights, which was in 2013.”

Over the course of three years, he continued to hone his skills and professional career in the sport, achieving a sizeable record.

“My record now for Muay Thai – and Muay Thai only – is around 20 professional and among them four defeats and no draws,” he said.

His biggest achievements was attaining the title belt of the sport in Brunei in 2018 (under the K1 Strike) at Jerudong Amphitheatre, as well as the title belt for the whole of Borneo.

Finding balance between his studies and the sport posed a challenge, as both were top priorities.

Discussing the physical challenges, Muhd Waliyur Rahman said, “For a Muay Thai amateur who wants to go professional, it will require a lot of hard work; you will have to train really hard.

“You have to focus on training. If the coach tells you to do 300 kicks, you have to complete them and not lie to yourself.”

Despite the hurdles, he encouraged participation in the sport, adding that efforts are in place to make Muay Thai appealing to newcomers.

“With the establishment of the Brunei Muay Thai Association last year, there have been more activities, among them amateur competitions at gyms across the country. While getting into Muay Thai as a competition is extremely tough, it is also possible to enjoy the sport as a fitness activity, especially for older individuals,” he said.