MUNICH, GERMANY (AFP) – Germany coach Joachim Loew is under pressure to find a way for his side to create more chances when they host holders Portugal at Euro 2020 tonight (midnight Brunei time), with their hopes of reaching the knock-out stage hanging in the balance.

A tense 1-0 defeat by France in their opening Group F game leaves the Germans needing a result at the Allianz Arena against Cristiano Ronaldo’s Portugal. Loew’s efforts to strengthen Germany’s defence meant only a Mats Hummels own goal was the difference against world champions France.

However, the hosts managed just one shot on target on Tuesday.

“If we can be more vigorous up front, we will be able to beat Portugal,” said Loew.

Germany have won their last four meetings with Portugal over the last two decades, most recently with a 4-0 victory in the 2014 World Cup group stage as the Germans went on to win the title in Brazil.

However, much has changed in the last seven years. Germany have steadily fallen from being the world’s number one side to 12th in the FIFA rankings.

Portugal have risen to fifth and are appear have a much stronger squad than when they were crowned European champions in 2016. 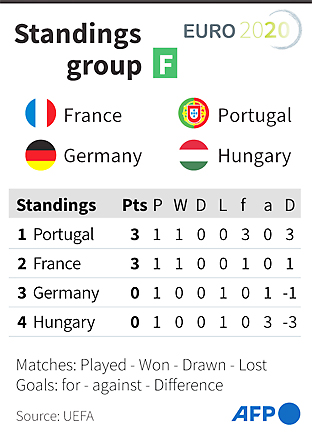 Portugal sit top of the early Group F table after Ronaldo scored twice in their 3-0 win over Hungary.

The Juventus superstar has now scored a record 11 goals at five consecutive Euro finals. But he has never scored against Die Mannschaft.

The fear in Germany is that a loss to Portugal could see Euro 2020 become a repeat of the national humiliation suffered at the 2018 World Cup.

“If some national players, or even the coach, actually believe that we will walk into the round of 16, there is a risk of repeating the failure of the 2018 World Cup,” read German daily Bild on Thursday. But the players remain confident they can turn things around.

“We have an awesome team, we have the quality and can go more, we still believe in us,” said German midfielder Emre Can.

A win in Munich would send Portugal into the knockout phase for a seventh straight European Championship.

“It was fundamental to start on the right foot to gain confidence and now we have to continue in the next game and win too,” said Ronaldo after the win over Hungary.

With 106 goals in 176 games for Portugal, Ronaldo is three short of the all-time international record, set by Ali Daei who scored 109 goals for Iran between 1993 and 2006.

“We all know his qualities and how easy it is for him to score goals,” said Portuguese playmaker Bruno Fernandes.

Ginter has admitted “it would be a mistake” for Germany’s defence to focus completely on Ronaldo.