German industrial workers to get pay raises in two-year deal

BERLIN (AP) – Germany’s biggest industrial union agreed with employers yesterday on a pay deal that will see millions of workers get raises totalling 8.5 per cent over two years as well as one-time payments meant to cushion the effect of sky-high inflation.

The IG Metall union and employers reached a compromise in the southwestern state of Baden-Wuerttemberg, a key industrial region.

In Germany, wage deals are typically hammered out in negotiations between employers’ organisations and unions that cover a whole sector, and an agreement reached in one region is generally applied nationwide.

IG Metall negotiates for workers in the auto and machinery industries among others, representing a total of more than 3.8 million workers.

The union initially demanded an eight-per-cent pay increase and a one-year deal. It first made the demand in early July; since then, Germany’s annual inflation rate has risen from 7.6 per cent to 10.4 per cent. 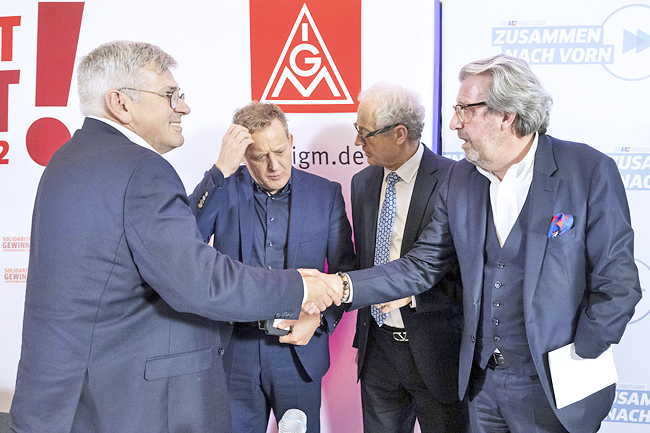 In their fifth round of talks, both sides agreed to raises of 5.2 per cent next June and another 3.3 per cent in May 2024.

German Chancellor OIaf Scholz, who has sought to find ways with unions and employers to address the impact of rising prices while preventing an inflationary spiral, has been keen to promote such tax-free payments of up to EUR3,000.

He argued the agreement would strengthen the German economy, which is expected to shrink next year.