THE WASHINGTON POST – I suppose that every generation feels, at some point, that “these are the times that try men’s souls”. Certainly, the past year alone has assailed each of us with the fear of covid infection, loneliness, the death of loved ones and sickening instances of racial and ethnic injustice.

To these can be added climate disasters, humanitarian crises, terrifying gun atrocities and our nation’s increasing political discord. All are deeply serious matters, most needing energetic attention right now.

At the risk of sounding unduly flippant, I want to put in a good word for books that contribute to what Samuel Johnson called “the gaiety of nations” and “the public stock of harmless pleasure”. I’m talking about wholly frivolous comic fiction.

For many readers, the first and foremost proponent of the subgenre is PG Wodehouse, whose accounts of upper-class twits effervesce with smile-inducing similes: “She came leaping towards me, like Lady Macbeth coming to get first-hand news from the guest-room.” Almost as well known among connoisseurs are EF Benson’s Mapp and Lucia novels (starting with Queen Lucia) and such humourous masterpieces as Jerome K Jerome’s Three Men in a Boat (To Say Nothing of the Dog), Anita Loos’ Intimate Diary of a Professional Lady, the immortal Gentlemen Prefer Blondes, and Stella Gibbons’ Cold Comfort Farm, which features, among its many other pleasures, old Ada Doom’s eerie, never-explained catchphrase: “I saw something nasty in the woodshed.” Still, there are many other, less familiar examples of delightfully inconsequential fiction, and one of the best is The Lunatic at Large, by the prolific J Storer Clouston. It’s a perfect April Fools’ Day treat.

First published in 1899, but now available in a modern edition (McSweeney’s/The Collins Library), The Lunatic at Large opens at Clankwood, which “bore the enviable reputation of containing the best-bred lunatics in England”. 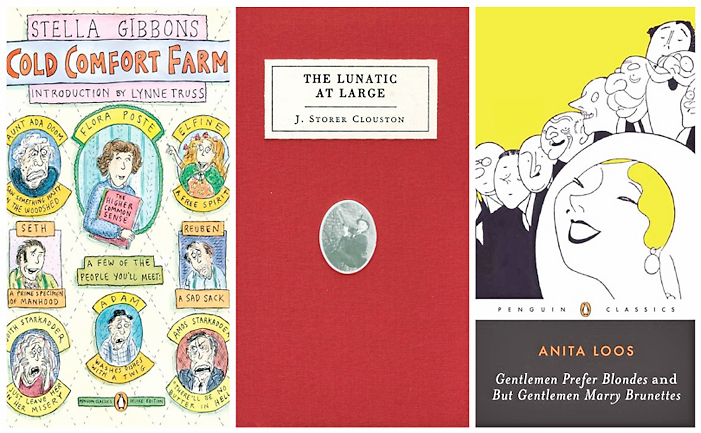 One night, under mysterious circumstances, a new inmate, apparently named Francis Beveridge, is delivered to the asylum.

Though suffering from amnesia, he turns out to be unflappably polite, irresistibly charming and quite frisky with the nurses. Think of Peter O’Toole in the film My Favorite Year.

Inevitably, Beveridge – who clearly isn’t deranged or in any way threatening – escapes from Clankwood and makes his way to London, where he shaves off his beard and mustache and assumes the new last name of Bunker.

In need of funds, he rapidly ingratiates himself with a visiting German aristocrat, the rich, kindly and naive Baron Rudolf von Blitzenberg, whose titles include that of “hereditary carpet-beater to the Bavarian Court”.