THE WASHINGTON POST – A stranger contacts you online, letting you know he’s been keeping an eye on you unawares. (Saw you at that restaurant the other night – loved your outfit!) Do you:

There are strong cases to be made for the first two options. Only Door Number 3, though, offers a path to a discomfiting psychological thriller. Perhaps it’s hard to believe that Hongmei, the hero of Geling Yan’s new novel, The Secret Talker, would behave in such a way. Or that anybody would. That’s fine with Yan. In this slim, tricky novel, she’s less concerned with plausible motivations than with the emotions that consume us when we force ourselves to confront our past and our secrets.

But about that stranger. The recipient of his emails, Qiao Hongmei, is a Chinese-born woman who’s living in the Bay Area with Glen, her American husband. Their relationship is adrift and passionless, and the stranger seems to know it, “messaging her from the shadows and keeping his identity hidden while he judged her, exposed her”. The man shares his knowledge about her whereabouts in creepy detail – the “alarmingly sexy beaded sandals” she wore at a restaurant or the tasseled cloth handbag she took to the library. 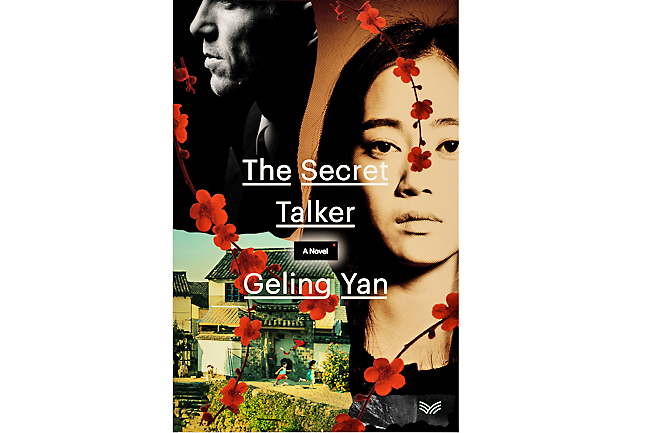 The nameless man shares little of himself in return. He has an estranged daughter, Hongmei learns, but not much else. But she keeps emailing back, both to suss out details and to keep her loneliness at bay. (She’s stalled on her dissertation, with few other ways to occupy her time.) She recruits a friend to email him to assist in the investigation, but also can’t shake “her slight attraction to this mysterious man” or her urge “to make sure she was truly special in his eyes”.

This is a profoundly out-of-touch conceit in 2021, when a ‘Guy on the Internet’ showing up in your inbox with intimate personal details should only set off klaxons and signs flashing “do not engage”. (Snip out a few letters, and a more accurate title for this book emerges: The Stalker)

It may help to know that Yan’s novel has a few years on it: It was first published in China in 2004. It also may help to know that her chief interests as a writer have more to do with her home country’s past than contemporary online mores. She wrote the screenplay for Xiu Xiu: The Sent-Down Girl set during the Cultural Revolution, and the source novella for The Flowers of War, a 2011 film starring Christian Bale. To the extent The Secret Talker redeems itself, it’s on that turf.

Hongmei, we learn, grew up in a town that was attacked by Japanese troops in 1937. The women hid in haystacks, which the soldiers speared with pitchforks and then set on fire. It’s a grotesque lesson in a culture of silence.

“The haystacks could swallow any number of secrets and wouldn’t let anything back out,” Yan writes.

Hongmei grew up during the Cultural Revolution, a child of the country at its most repressive.

Later, as a military interpreter, she falls for Glen, a visiting English teacher, which leads to accusations that she’s a spy. She’s compelled to fill a “regret journal” before she makes her escape with Glen.

Hongmei’s trauma helps explain her venting to the strange man – she’s been trained to think of every misstep as a regret, and it’s easier to share so many repressed secrets with a stranger than with her husband. But Yan’s tone about Hongmei’s crisis (via translator Jeremy Tiang) is so cool and plain-spoken, so detached from anxiety and paranoia, that we’re invited to wonder how threatening the stranger is.

Perhaps her stalker/emailer is as close as the next room in her apartment. Perhaps he isn’t real at all. (The identity crisis is coming from inside the house!)

As the novel pushes to its close, full of missed connections and climactic confrontations, it becomes more fully a story about the toxicity of repression than about ill-advised online banter.

Hongmei isn’t a pushover, but her youth has made her skeptical of everybody close to her.

“No one can ever be fully aware of how many plans are sprouting in the darkness at the bottom of their heart,” she thinks.

A more realistic novel might have given Hongmei a different way to share her anxieties. But in this one, the tension between her need to express herself and her questionable method for doing so is affecting, even at times touching. An important element of the plot turns on a misspelling of the word “disappoint”, which means the word appears constantly in the novel, storm clouds always passing through the story to underscore Hongmei’s sense of failure and disorientation.

The Secret Talker is flawed conceptually, but it succeeds at bringing the mood of an existential novel to a hair-raising thriller. Yan is a fan of stories where interlopers disrupt stable relationships – among her screenplay credits is an adaptation of Les Liaisons Dangereuses. But she also sees a third party as a way to patch a fractured relationship.

“Whatever roles human beings played by day, if they didn’t have a moment like this when they could reveal themselves, they’d surely be driven mad,” Yan wrote.

And her hero is intriguingly close to that edge.