The 24-year-old artist came up with the idea to produce paintings for people with visual disabilities three years ago when she was a student at the college of fine arts.

“I aimed to create a visual world for blind children to allow them to identify and imagine the details of the elements of my artworks,” Salama told Xinhua as she flashed a smile.

When she presented her first relief paintings to the visually impaired people, she followed up closely on their reactions as they touched her paintings.

“Mostly, they were satisfied and told me that I took them out of the darkness to a world of beauty,” she recalled, saying the positive feedback gave her incredible positive energy and has encouraged her to improve art skills “to be their eyes in the art world”.

Yet, her ambitions did not stop there as she decided to target the blind children who still totally rely on others to teach them about the world. 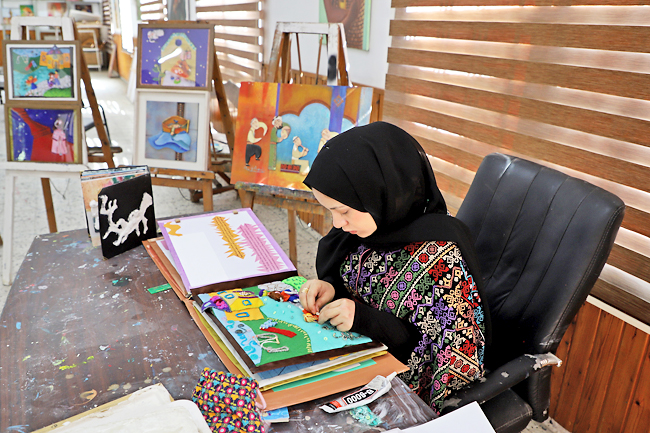 “I decided to take the matter into my own hands and invest my art experiences to produce special stories for them that would allow them to realise more about their surroundings,” she said.

To make her mission easier, the artist resorted to combining Braille’s writing with relief art of pictures for her stories to embody their characters, environment, and other elements.

Clay, gypsum, cloth, buttons, gouges, rasps, and colours are among the materials Salama uses to form and produce her own stories. So far, she produced two short stories of 12 pages for each.

“I chose these stories specifically to start instilling human values in the hearts of children with visual impairment and to teach them that disability is not the end of the world, but in many cases, it could be the basis for success,” she explained.

After finishing the stories, she showed them to a group of blind children in their private schools in the Strip. “I will never forget their happiness when they read the stories and touched their heroes,” she said.

“Because of my stories, the blind children became aware of the clouds, sea, trees, people, and other things that are saved in their minds,” said Salma, adding that she hoped to produce more copies of stories in the future to help more children.