Gauff makes breakthrough in Paris at 17

PARIS (AP) — If Coco Gauff (PIC BELOW: AP) keeps playing like this, she’s going to go from teenage prodigy to Grand Slam champion in a hurry.

The 17-year-old American completely overwhelmed Ons Jabeur in a 6-3, 6-1 victory at the French Open on Monday to become the youngest woman to reach the quarterfinals at any Grand Slam tournament since 2006.

Gauff lost only nine points on her serve and was also highly effective at the net, winning 13 of 17 points when she came forward — which was especially impressive against a player who is known for her shot-making skills.

“I feel like this has been the most consistent tennis I have played at this level,” Gauff said. “Hopefully I can keep that going.”

She is one of six first-time Grand Slam quarterfinalists in the women’s draw, a record for the Open era, which dates to 1968. The others include her next opponent, Barbora Krejcikova, along with Maria Sakkari, Elena Rybakina, Paula Badosa and Tamara Zidansek.

Marta Kostyuk was trying to become the seventh, but she lost to 2020 champion Iga Swiatek 6-3, 6-4 on Monday night. Swiatek takes her 22-set French Open winning streak into a quarterfinal against the 17th-seeded Sakkari, who eliminated last year’s runner-up, Sofia Kenin, 6-1, 6-3. 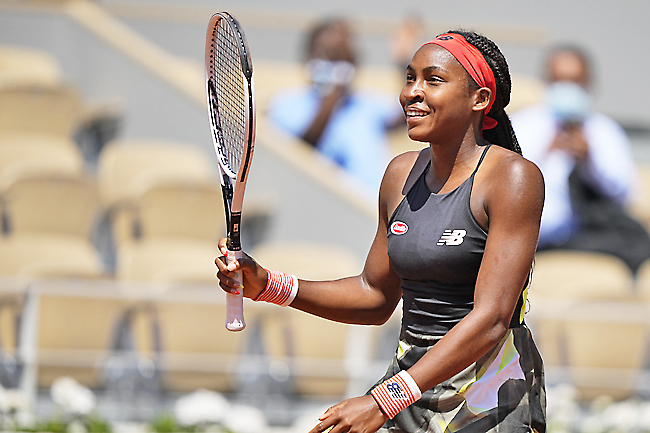 Krejcikova advanced by beating 2018 French Open finalist and 2017 US Open champ Sloane Stephens with a similarly lopsided score — 6-2, 6-0. Jabeur said Gauff is a contender to raise the trophy — either this year or in the future.

It wouldn’t be the first time Gauff claims a title at Roland Garros, having won the junior title in 2018. Gauff already announced herself as a contender to become the next great American player when she made a run to the fourth round at Wimbledon as a 15-year-old qualifier two years ago.

Now, having gone one step further, she became the youngest American to reach a Grand Slam quarterfinal since Venus Williams did it at 17 at the 1997 US Open.

“I’m only going to be 17 once, so you might as well talk about it while I’m 17,” Gauff said. Gauff has not dropped a set in Paris this year. She won both the singles and doubles titles at a warmup tournament in Parma before coming to Paris. That came after a run to the semifinals of the Italian Open.

In all, she’s on a career-best nine-match winning streak. “Parma gave me a lot of confidence, especially on the clay,”
Gauff said. “It taught me a lot about how to close out matches and deal with the pressure on important points.”

Meanwhile, Sofia Kenin blamed jitters for her fourth-round exit in the French Open.

At number four, Kenin was the highest-seeded player left in the women’s draw.

But she lost serve six times and had 32 unforced errors in a 6-1, 6-3 loss to Maria Sakkari of Greece. “Nerves got the better of me,” Kenin said.