COCHABAMBA, BOLIVIA (AFP) – The alarm in the Bolivian hospital pierced through the din of beeping life support machines and hissing ventilators – a patient lay unconscious, oblivious to the warning that his life hung by a thread.

The monitor was flashing red. “Low oxygen pressure” it alerted, showing a reading of 25.

“It should be 75!” doctor Daniel Quispia said as he jumped to the patient’s aid, adjusting the controls in a bid to get the oxygen flowing again.

The alarm stopped and, relieved, Quispia took a deep breath. His patient, battling a severe coronavirus infection, did too.

The country is in the middle of a third wave of infections: on June 9 officials reported a daily record of 3,839 new virus cases.

Cochabamba, a central Bolivian city in the Andes some 2,600 metres above the sea level, has been averaging about 850 cases per day for several months.

Quispia is the only critical care doctor at the Hospital del Sur in Cochabamba, Bolivia’s fourth most populous city. 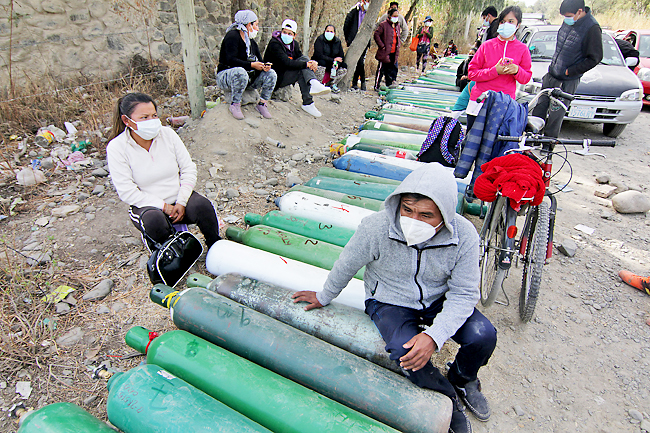 Six of the hospital’s 18 intensive care beds are available to any of the two million people living in the department of Cochabamba.

But only three of the six beds can hold patients due to a severe lack of medical oxygen.

“This is out of control,” Quispia, 36, told AFP. He had to raise his voice to be heard over the noise of a small oxygen plant hastily erected outside the intensive care unit (ICU) – a helpful but insufficient stopgap measure.

Daily consumption of medical oxygen in Cochabamba had skyrocketted from one tonne before the third wave of virus infections to as much as four tonnes today.

Police had to rush to Arbieto, an hour’s drive from Cochabamba, to break up a crowd that had surrounded a Valle Alto oxygen plant employee sent to take down information from people waiting – some of them for days – to buy a refill of the life-giving gas.

“It’s an emergency!” a woman insisted as she tried to jump the queue. “We are all here for the same reason!” someone shouted in reply.

“I’m sure you’re here for business,” another woman yelled at a man. She was referring to people who buy oxygen to sell illegally, and at a premium, to desperate people caring for loved ones at home or in hospitals that does not have enough.

Many have arrived early in the morning to line up, only to leave empty-handed after the long wait.

“You need a heart of stone,” said plant manager Amilcar Huanca Mamani. Others have taken to camping out at the site, sleeping in their cars or in tents – such as Pedro Huaichu and his daughter Maria.

“My turn is at 1500,” said the pensioner, in line to collect oxygen for his ailing wife.

It was noon, and appointments were already running two hours behind schedule.

Julio Cesar Padilla had been there for three days. With bleary eyes he stared vacantly into the distance, clinging to an empty oxygen cylinder.

“My father is in intermediate care and my mother is in intensive care. They have been there for a week. And I go from one place to the other to try and find an oxygen cylinder. One cylinder barely lasts my mother between six to seven hours,” said Padilla.

“Doctor, it is an emergency, we have no more oxygen!” – not the first time he has heard the appeal that day.

Cruz drove through the city streets, empty due to a dusk to dawn curfew, to the Hospital del Norte.

Along the way he pondered aloud whether the time has come to declare a red alert, which warns hospital officials that it may be hours before oxygen supplies arrive.

This alerts doctors and nurses to be ready to manually ventilate patients to keep them alive.

“Respect for the disease has been lost,” Cruz lamented as he contemplated extreme measure.

After the first wave of infections and a strict lockdown, Bolivians went back to their lives almost as if nothing had happened.

As a result, today “the curve continues to rise”.

And immunisations are not keeping up: less than 15 per cent of the target population have received at least one vaccine dose.

“Here ends the prison that was life,” read a sign outside Cochabamba’s cemetery, its two crematoria recently so busy that there was a wait of up to four days.

In a bid to prevent contamination, cremation is mandatory for coronavirus victims, even suspected cases.

Only the owners of private crypts and mausoleums are exempt.

“For them, we recommend that the niche never be opened again,” said cemetery administrator Lilian Scott.