THE WASHINGTON POST – As a kid, author Gary Paulsen felt safe in only two places: the woods and the library. His parents had a disease where it caused them to ignore him or yell at him. Paulsen often slipped away to camp outdoors in mild weather or warm up in the library on winter evenings in northwestern Minnesota.

Paulsen wrote about these experiences in his gritty new memoir, Gone to the Woods: Surviving a Lost Childhood. (The book is best for ages 10 and older.)

The memoir explores what he calls “five pivotal points” in his early life, when “things were about to change – for good or bad” he told KidsPost by phone from his home in rural New Mexico.

Paulsen refers to himself as “the boy” rather than “I” in the book, and he recalled many tense and dangerous moments. Readers will find themselves turning the pages quickly to see what happens next and whether the boy survives, perhaps forgetting that this is the life story of a popular author now 81-years-old.

Readers can see that the things Paulsen learned and the choices he made mark the trail to his life now. 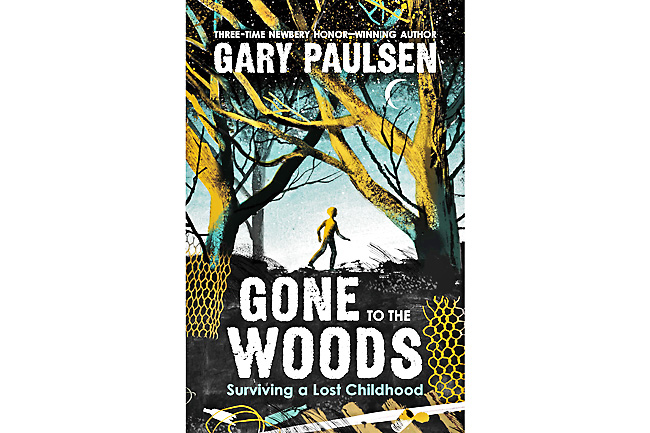 It’s clear, too, that Paulsen has drawn on his own experiences for his many books. His best-known novel, Hatchet, is about a boy named Brian, the only survivor of a small-plane crash. Just as Paulsen did in his younger years, Brian has to figure out how to find food and shelter in a harsh, though beautiful, wilderness. The book won a Newbery Honor. Paulsen went on to write four more suspenseful novels about Brian.

A sense of adventure fuels Paulsen’s adult life as well as his books. He has hiked and camped throughout North America and frequently sailed the Pacific Ocean. With his sled dogs, he entered the Iditarod, Alaska’s gruelling 1,100-mile race, three times and completed it once.

Paulsen said he sometimes fit the writing projects around such adventures. You wouldn’t guess that with the many children’s and adult books he has written. No one, including Paulsen, seems sure of the exact count. His publisher suggested it is 131 books plus several dozen that are out of print.

He also worked as a ranch hand, truck driver and soldier. And the memoir describes jobs he had as a teen, at a bowling alley and a carnival. Throughout his life, though, it’s the writing that has consistently given him a “wonderful feeling” said Paulsen. “It’s fluid and alive.”

Writing the memoir was like “peeling an onion”, Paulsen said. He was surprised by the release of a “flood of memories”.

Paulsen especially remembers the public library with its “golden light” and the kind librarian who first shared books with him when he was 13-years-old. Paulsen was a poor reader and often skipped school, he said, but he learned to love reading at the library.

The librarian’s gift of a little notebook and a sharpened pencil began his writer’s journey.

Paulsen now stays closer to home, but he remained keenly aware of the natural world. He’s curious about the way animals think and move, including his four dogs, as well as ants, earthworms and the coyotes that gobble pecans from nearby trees.

And the writing adventure continues. Paulsen has already dived eagerly into his next novel, a comedy. It’s about a boy who uses a free puppy-training brochure to try to train his free-spirited, sometimes problematic dad. Said Paulsen, with a chuckle, “Working on it, sometimes I laugh out loud.”