ANN/THE ISLAND – Green in all its brilliant shades; vast undulating open spaces; clumps of trees; water to be seen and a distant white dagoba. Peace and absolute serenity and excellent service with the helpers showing concern and sincerely desiring to please. All this and more during a weekend spent in a famous garden.

There were four of us staying over in the bungalow which is now a superb boutique hotel.

Two occupied rooms in the main house while my son and I were in the Gatehouse on the upper floor with a wide, wide glass window and the rear of the large room a dressing area leading to a superbly fitted bathroom with a bathtub and also shower area.

I had previously walked around this garden which is a showpiece of pride to our country, with my son explaining each piece of it and sat on the veranda of the house where he gave the history. But this was my first relaxed overnight stay. I soaked in the solitude; the unbroken stretches of nature; the vistas at dawn, midday, and dusk with twilight gently descending. The moon illumined the wide veranda of the house and lawns giving an entirely different perspective.

We had our meals out in the garden of the main house, in the different locations the owner would have breakfast, lunch and dinner. Breakfast was on the front entry terrace of the house; lunch in a corner of the garden and dinner on the north terrace with lights glimmering in the distance. Most of the dishes served were what the owner would have had. Our lunch after arrival was rice and curry. Dinner offered a choice of fish prepared in two ways or chicken, pasta and homemade bread. Breakfast meant hot, hot hoppers with spicy accompanying curries. 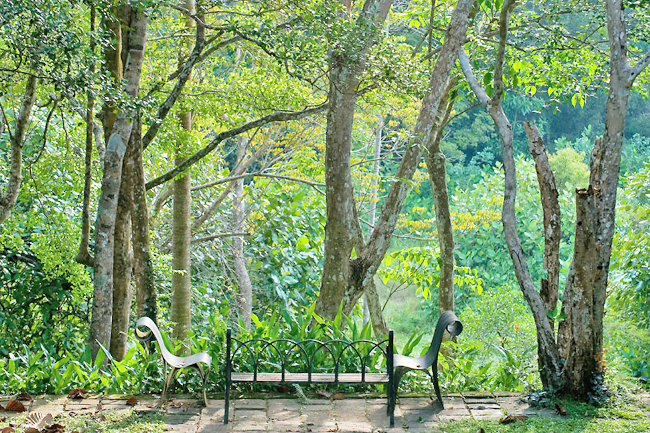 The weekend was spent at Lunuganga; with three well-known architects: C Anjalendran who had worked with Geoffrey Bawa and served as his unpaid assistant for 20 years, spending most weekends at Lunuganga with the great man. The other, my architect son, an ardent admirer of Bawa; and a young, fresh graduated architecture student. Thus it was a unique two-day stay in a special place with interesting conversations with Anjalendran about the history and evolution of Lunuganga. Many were informal conversations with nuggets of information and memories narrated, but one was a proper lecture with all the staff invited to it. Thus we got to know anecdotes, character traits of Geoffrey Bawa and his brother, Bevis too, and how this place came into being.

In January 1948, the year his mother died, Geoffrey Bawa (1919 -2003) bought a neglected rubber plantation a few miles interior of Bentota. Upon first sight of the land, Bawa knew for sure it could be made the garden he had created in his mind. He had returned from Cambridge with a Tripos in English, but design and architecture were what his intellect drove him to. His brother, Bevis had already designed and constructed his garden residence – Brief, also in Bentota, in 1938. Anjalendran had a long tale to tell about the purchase of the rubber estate where buying and building happened in a sort of musical chairs enactment, with music being substituted with coaxing, promises and money. The estate was the dowry endowment of a lady living in Bentota.

She had rented the then-dilapidated house to the tax officer of the area. He said he would budge only if he got possession of a house in Bentota occupied by another government servant. This latter gent agreed to move when he got possession of the schoolmaster’s house down by the sea. Hence Bawa approached this last person.

He said he would vacate his house if a new one was built for him. Thus the building of this house resulted in Geoffrey Bawa finally becoming the owner of the 15-acre rubber estate after “controlled patience and determination and occasional bouts of despair”.

He wrote to his friend Jean Chamberlain, “When I had first seen Lunuganga I had known that with a first few clearings of trees and opening up of obvious vistas an inevitable basic pattern would emerge.

“It was enormously exciting, and the morning after the dramatic breaking of walls and the feel of possession, the adventure began and that has lasted 40 years and the pleasure of which has never palled. ”The old house was completely renovated and reoriented with the back becoming the front. Various buildings were added over time as the garden was being reshaped.

Today, the property is under the care of the Geoffrey Bawa Trust and operated impeccably as a boutique hotel by Teardrop Hotels. Many of the staff have been at the property for at least a decade.

Pointing to the verdant island in the middle of Dedduwa Lake beside which Lunuganga stretches, Anjalendran said that it was a belief propagated by temple lore that the restless spirit of a long-dead monk lived in a tree on the island.

Maybe he turned a benign eye on the new owner of the land as he started creating his heart’s desire for a unique garden. Ulrik Plesner, Bawa’s early collaborator in the 1960s, was a constant visitor and offered suggestions.

To improve views, the land was meticulously ‘structured’ with massive earthworks, transport of soil and depositing it elsewhere so that the present slightly terraced slopes were achieved. Trees were studiedly left standing or cut down.

Cinnamon Hill seen from the back of the house was lowered so that a sliver of the lake at the far end could be seen.