For Syarikat Trillion Executive Secretary Amy Chin Ying Siew, organising a blood donation last June was a promise she made to herself after undergoing a premature delivery and her baby being admitted to the Raja Isteri Pengiran Anak Saleha (RIPAS) Hospital’s Neonatal Intensive Care Unit (NICU) for three months and needing quite a lot of blood transfusion.

“The supply was limited due to stock issues and with me wanting to give back to the community, I vowed to organise blood donation drive once the country is in the Endemic Phase.”

She shared her views at a blood donation drive organised by Trillion at the Borneo Kopitiam in Abdul Razak Complex in Gadong yesterday, this time, setting the bar higher from the 100 pints of blood during the first donation last June to 150 pints.

Amy as the coordinator of the corporate social responsibility (CSR) activity shared that Trillion has been organising blood donation campaigns with its sister companies SKH Department Store and Borneo Kopitiam for several years but they had to be halted temporarily due to the pandemic outbreak.

“When the Endemic Phase was announced and COVID-19 restrictions relaxed, I immediately planned and organised our first blood donation drive post-COVID in June where we exceeded our 100 pints target and successfully collected 130 pints of blood,” said Amy. 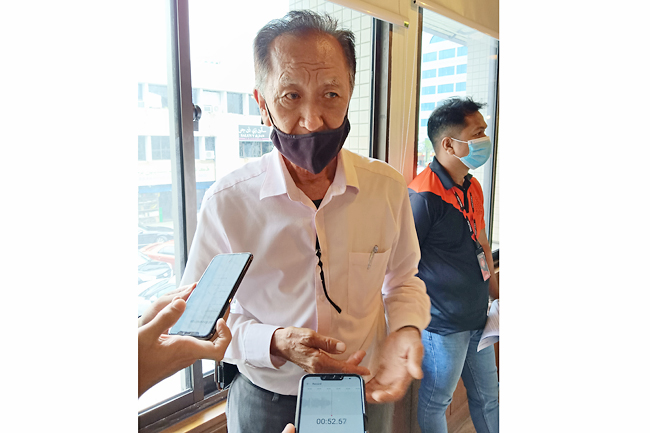 She added yesterday’s campaign target was collecting 150 pints of blood with it was organised in celebration of SKH Director Lee Chiap Kiang’s birthday that falls on November 6.

The donation drive had a fun atmosphere with balloons, photo booth as well as stairs leading up to the donation area being lit up.

Amy said apart from aiming to reach their target, it was also hoped that the drive will make the public aware on the need to donate blood.

Meanwhile Lee who was also at the event said he was pleased with the number of people who had turned up.

Throughout the drive, medical personnel and officers from the RIPAS Hospital Blood Donation Centre were occupied as donors waited patiently for their turn.