From waste to food

KAYUNGA, UGANDA (AP) – Moses Wamugango peered into the plastic vats where maggots wriggled in decomposing filth, the enviable project of a neighbour who spoke of the fertiliser problem he had been able to solve.

The maggots are the larvae of the black soldier fly, an insect whose digestive system effectively turns food waste into organic fertiliser. Farmers normally would despise them if they weren’t so valuable.

“I want the maggots too,” Wamugango said. The agriculture officials who distribute the vats for free took his name two weeks ago and said they would give him four to start. “I am still waiting. The last time they came, they didn’t reach my place. That’s the problem I have right now.”

Uganda is a regional food basket, but rising commodity prices blamed on Russia’s war in Ukraine are hurting farmers. Fertiliser prices have doubled or tripled, with some popular products hard to find on the market, according to the African Fertiliser and Agribusiness Partnership, a non-profit that supports agriculture across the continent.

Most food produced in sub-Saharan Africa comes from smallholder farmers who deploy family labour. Agriculture experts want governments and outside benefactors to support them more, including via subsidies. 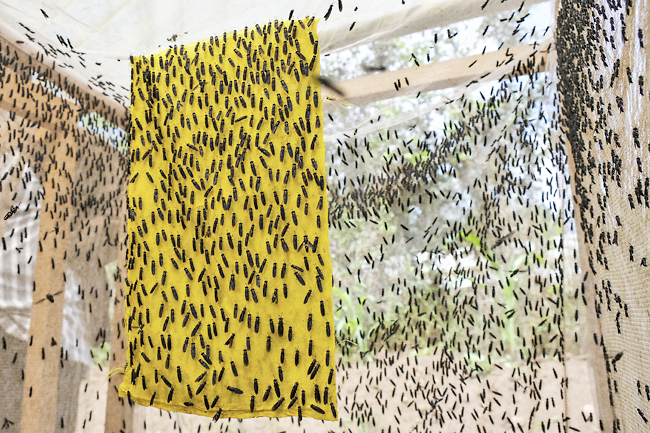 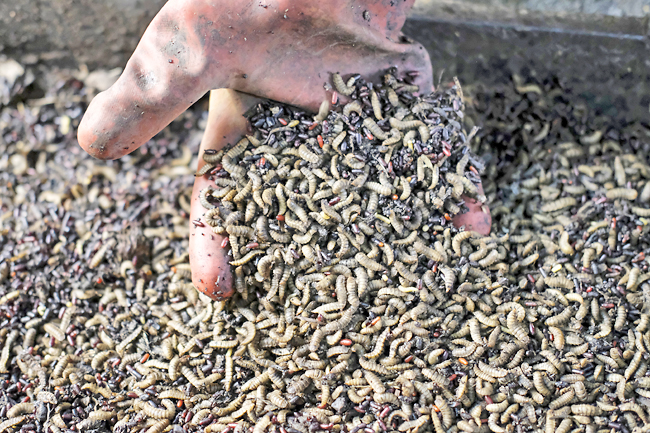 Some who have warned for years about depending too much on synthetic fertiliser see larvae farming as an exemplary effort toward sustainably organic farming. They hope the programme can be ramped up one farmer at a time. Larvae farming programmes exist in other countries, including Nigeria and neighbouring Kenya, where parts of the country are suffering from drought.

In this Ugandan farming district not far from the capital, Kampala, hundreds of smallholder farmers have embraced the farming of the short-lived but fertile insect.

The number of farmers signing up swelled as the price of synthetic fertiliser rose, presenting many with the challenge of how to look after demanding plants such as coffee. From just two participants in January 2021, the number now stands at more than 1,300 larvae farmers.

The arrangement is mutually beneficial. The groups supplying farmers with young larvae and vats, waste management company Marula Proteen and agricultural exporter Enimiro, are assured a steady supply of larvae for their continuous breeding efforts.

Farmers are guaranteed a three-fold cash profit over the 14 days they raise larvae on food waste, with the remaining mix of larvae poo and compost left to nourish their gardens. “I used to be afraid of maggots,” said farmer Joseph Wagudoma, the owner of eight vats received in February. “When I would hear that someone is farming maggots, I would say, ‘How can someone rear maggots?’”

His fear dissipated when he saw an early recruit freely dipping his hands into a vat.
Wagudoma now makes about USD10 every fortnightly harvest, enough to buy groceries and even put some money aside. His chickens no longer stray too far, lingering under the suspended vats to catch larvae slipping through.

He regularly pours the watery compost around the coffee and vanilla plants he believes are looking increasingly healthy.

“The sun burned people’s plants and they died. But for me, the fertiliser I have keeps my soil cold and nice,” said the father of six.

“My coffee plants now give flowers more beautiful than in the past. What is good I have found in maggots. I get some cash and I get fertiliser as well.”

In Kayunga district, the headquarters of a widening larvae farming programme in central Uganda, an early challenge was overcoming farmers’ skepticism about the viability of maggots.

“Now many of them even come to our hub, come to the gates, to ask for the larvae,” he said. The target of enrolling 2,000 farmers in Kayunga is within reach, and a similar project in western Uganda is underway.

The larvae farming programme is “a real solution” to hunger, heavy dependence on imported fertiliser and climate change, said Ruchi Tripathi of the London-based group VSO, which supports farming communities around the world.

“We can no longer continue producing by destroying our soils,” she said. “How much can you exploit the soils and how long do you think it’s going to continue?”

The growing popularity of the larvae farming programme means there’s hope for transitioning away from synthetic fertiliser in some African countries, she said.

African cities would do well to have plants like one in Kampala that takes only a fraction of tonnes of daily waste to feed its larvae breeding hub, said Tommie Hooft van Huijsduinen of the Marula Proteen group supporting out-growers in Kayunga.

With the price of synthetic fertiliser now discouragingly high for some farmers, he said, his plant has more orders than it’s able to supply.

At USD11 per 50-kilogramme bag, his product is four times less expensive than synthetic fertiliser on the market – and in demand among commercial coffee farmers who are gauging its performance.

“What we’ve seen is that before (the war in Ukraine) we were looking for customers and we were convincing them to come and try it out,” he said. Now that has changed: “I wish I had more fertiliser.”