THE WASHINGTON POST – Perhaps Iceland can stake a claim to being the world’s “most intriguing” country. It is a thriving independent democracy on a small volcanic island that dangles like a locket from the Arctic Circle. It has a long and complicated Scandinavian history, and for about a thousand years, it has been churning out productive and original writers. One of my favourites of these is Halldor Laxness, who was born in 1902 and died in 1998, and won the Nobel Prize for Literature in 1955. Maybe it is no coincidence that he was born on William Shakespeare’s birthday. His best-known novel in English is Independent People. But this new one, just retranslated and published by Archipelago Books, is Salka Valka, which was written when Laxness was in his late 20s and focuses on the spunk and inner life of a woman who has to make it on her own in a small village in the north of the island, and is, though different from Independent People, just as interesting.

The story begins when Salka Valka and her mother, Sigurlina, show up in the village from somewhere Salka cannot remember. Salka is eight. She would rather go on to Reykjavik and is already aware that there are no adults that she can rely on, partly because her parents weren’t married. The village’s economy is based on the fishing industry, and no one is paid a salary – the money owed to them is deposited in the accounts of a general store owned by the man who also owns the fishing company, and that is where the local families get the few basics that they can afford. Sigurlina and Salka turn to the Salvation Army for aid.

Laxness explores Salka’s inner life and the social and economic circumstances of the village as both change over the course of about 20 years. Her story is long and sombre, but Laxness is adept at putting in some amusing observations. At one point, Salka is talking with her somewhat mysterious but longtime friend, Arnaldur, about a politician Salka thinks is a Marxist (Marxism vs capitalism is an ongoing theme of the novel). He said, “We are the people of Ormar Orlygsson, who despises the victory the moment it is won, and Thorsteinn Sidu-Hallsson, who had no desire to flee the enemy army at the Battle of Clontarf, but instead sat down and tied his shoelace.” 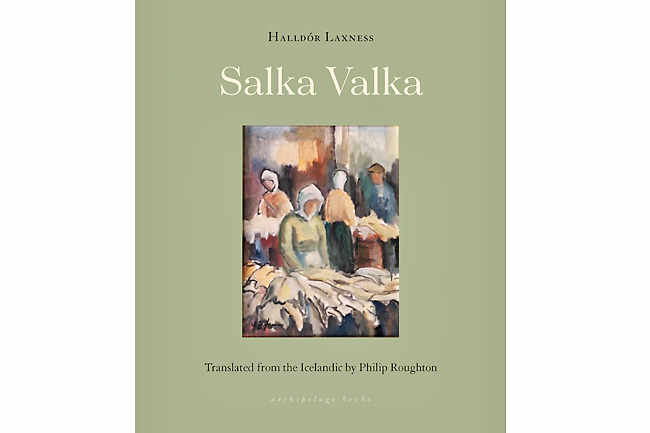 Because it was written in the early 1930s, Laxness is reticent about the event that turned Salka away from the normal woman’s life that her mother is desperate for, but the reader can sense that some sort of sexual violation is the trigger. However, Laxness is not as interested in how Salka processes that event as he is in how her self-determination and strength take her through many events and decisions, and he is also interested in how citizens of this dark town survive their troubles and argue over which political system they think will work the best for themselves and their fellow villagers.

Laxness demonstrates that in the 1920s and 30s, choosing the Soviet model or the American model was an individual’s choice that depended on circumstances, personality and the difficulties of actually knowing what was happening outside the village, or the city, that a person might live in. Toward the end, Salka and Arnaldur get into an argument that explores whether the political and the personal can coexist. It feels exactly like the back-and-forth a brilliant a sophisticated 30-year-old writer would come up with about the nature of love and passion and what political truths they express. Undoubtedly, this aspect of Salka Valka was shaped by the trouble Laxness got into in 1929 for publishing an article in a Canadian magazine focussed on Icelandic immigrants to the United States (US) that was critical of the US (Laxness lived for two years in Hollywood, trying to get his break, and was disturbed by the impoverished and homeless people he saw).

Laxness was prolific – he wrote 22 novels, as well as stories, plays, poetry, travelogues, He also translated Ernest Hemingway’s works into Icelandic. But he was a seeker, like Salka and her fellow characters, eager to understand how the world works and how it can be made to work better.

For modern readers, especially those who are aware of what a prosperous and enlightened tourist destination Iceland has become, Salka Valka is a wonderful exposure to Iceland’s troubled past and to the Icelandic sensibility that comes from making the best of things even when there isn’t much to be made. Laxness’s characters are rough and honest, and Salka Valka is one of the most empathetic portraits of a girl and a woman that I’ve read by a male author. This new translation is readable and compelling.